Three different bonus games to trigger 48,000x jackpot up for grabs progressive multiplier free spins Find out where to play… 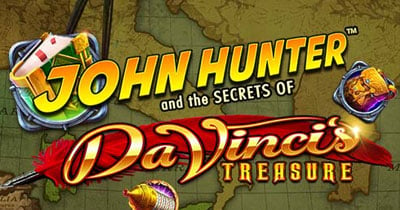 Da Vinci’s Treasure is another high volatility hit from Pragmatic Play. The adventure-themed slot pays tribute to the famous artist’s lesser-known work, and sets you off alongside the archaeologist John Hunter on a quest to uncover the hidden treasures Da Vinci left behind. Read on to find out more about this feature-rich Pragmatic Play video slot in our comprehensive Da Vinci’s Treasure Slot Review.

Being one of Pragmatic Play’s most popular titles, you can easily find Da Vinci’s Treasure as part of the slots collection at several casinos. We recommend you check out the ones below, which will also enable you to claim a good welcome bonus on deposit:

Five reels and three rows sit over a map as you launch Da Vinci’s Treasure. In total, there are 25 fixed paylines that payout for combinations from left to right.

The symbols each hold a different value, from low-value playing cards to the picture symbols.

The picture symbols include Da Vinci’s inventions, a backpack, a journal, and the young archaeologist. The last symbol is the most lucrative and will appear stacked for even more opportunity to land winning combinations.

There are also special symbols to watch out for. Da Vinci represents the Wild symbol in this title, and a Cryptex puzzle depicts the Scatter symbol.

The lowest value symbol, the number nine, will payout 0.05 for only three on an enabled payline. On the opposite side of the scale, the most premium symbol, John Hunter, will give you 8.00 for five on adjacent reels.

Both casual gamblers and high rollers alike will be pleased with the wide betting range available on Da Vinci’s Treasure. You can play as little as £0.25 or place a riskier wager of £125.

As has become the norm for Pragmatic Play titles, this video slot has an autoplay option with various settings. You can toggle the number of spins and when you would like the function to stop. The settings allow you to choose from multiple options to tailor the continuous lay to your preferences.

The Da Vinci’s Treasure slot RTP is a good 96.53%, which is above average for the industry. It’s a high volatility slot, meaning that you’re more likely to land a substantial but occasional win over small and often payouts.

The maximum win in this video slot is a whopping 48,000x your stake and can be achieved through the bonus features which we’ll describe in more detail below.

Within the base game, there are two vital symbols for you to land. These symbols are the Wild and the Scatter, which holds the key to the bonus features.

The Da Vinci Wild holds the typical ability to substitute for all other symbols except the Scatter. The Wild will only land on reels two to five.

The Scatter symbol will only land on reels two to four, and collecting three or more during one spin will activate one of the three bonus games at random.

If you trigger this feature, you must spin the fortune wheel to determine how many moves you can make through the 23 different points on the map. At each location, you will be awarded a cash prize, make it to the end of the quest, and be awarded the most lucrative sum.

The Map Quest feature will end only when you complete the quest or if you’re unfortunate enough to land on the ‘game over’ section of the Fortune Wheel.

The second randomly chosen feature you can enjoy is the prize picker. You will be able to choose between three themed options to uncover a hidden prize.

The free spins bonus game in Da Vinci’s Treasure is the most rewarding of them all, so keep your fingers crossed that those scatters will lead you to it! When this feature is activated, you will receive 12 free spins with a 1x multiplier attached. For every spin, your multiplier count will increase by one. Therefore, you could end the round with a 12x multiplier. For every winning combination you land you will be paid out the corresponding multiplier for that spin.

However, landing three more Scatters during this feature will retrigger the free spins, and you will be awarded another 12 spins. You can continue to collect spins until you reach a maximum of 60.

Da Vinci’s Treasure boasts cinematic graphics with an adventure style theme. The colour scheme of red and green fits perfectly with the embellished trim of gold. The entire interface shouts luxury and riches, which is an excellent match for a slot with the word treasure in the title. Each symbol is intricately detailed and has been animated in a semi-realism style.

The audio pumps up the atmosphere and immerses you in the quest. Plus, the sound effects that accompany the wins and features create an immersive playing session. If you prefer to spin in silence, Pragmatic Play has also included a mute button.

Da Vinci’s Treasure is often compared to Book of Dead, another top title from a different powerhouse provider, Play’N Go. Pragmatic Play also offers other titles as part of its John Hunter series, including John Hunter and the Tomb of the Scarab Queen and John Hunter and the Aztec Treasure. Other adventure-themed slots you could try out include NetEnt’s Mercy of the Gods slot and Betsoft’s Max Quest.

Da Vinci’s Treasure is an excellent choice for you if you enjoy adventure-style video slots and plenty of lucrative bonus features. The high volatility and impressive RTP won’t leave you disappointed, and no matter your budget, you can get involved in the quest for hidden treasures.

You can enjoy hours of fun playing this video slot with its three different randomly selected features and vast amounts of free spins. Plus, with the chance to win 48,000x your stake, Da Vinci’s Treasure is definitely worth a few spins!