Reel Talent is an online slot from Just For The Win. Read our review below to learn about this game's Superspin feature and more. 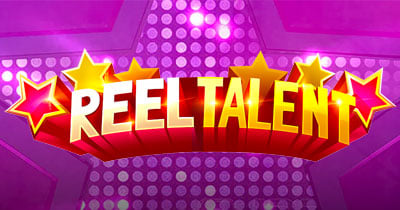 This November 7th, Just For The Win released its new slot, Reel Talent, a game inspired by the glamour and excitement of those beloved talent shows! Featuring re-spins, an interesting symbol storage feature and Superspins that will reward you big, we believe there’s a lot of potential in this game, which is why we’ve decided to share what we’ve learnt about it so far with our readers in our Reel Talent slot review below.

Reel Talent is a 5-reel slot with 20 paylines featuring original animations associated with singing and stage performances. Symbols include playing cards, microphones, torches, guitars and higher-paying magicians’ rabbits, a wolf guitarist, a crocodile fire breather and a lion singer. There’s also a Reel Talent game logo, which is the most rewarding symbol that pas out 50x your stake if you land 5 on a payline. This also functions as a wild symbol to replace all symbols on the reels. 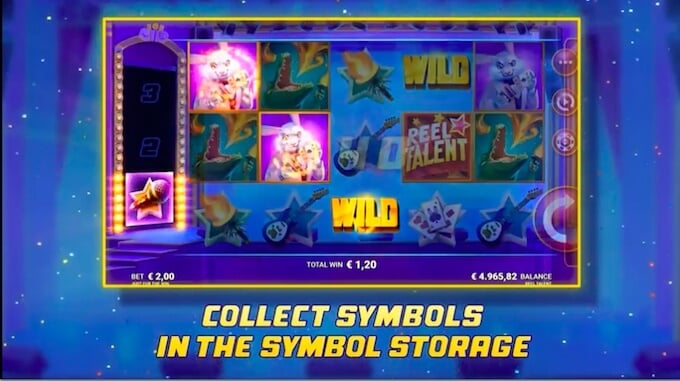 When you land on any win during the Reel Talent base game, you will trigger the Symbol Storage feature. In this case, the winning symbol will be stored in the column to the left-hand side of the reel and the player is rewarded a re-spin. If you land two other wins thanks to the re-spins and manage to fill up the column with 3 symbols, this is when you’ll trigger the Reel Talent Superspin feature.

The Superspin feature in Reel Talent slot consists of 3 different levels, during which the reels will only contain the stored symbols you have collected during the base game. If you won with 3 different symbols, you will access the Showtime Superspin level, whilst 2 different symbols will give you access to the Big Stage Superspin. If you were lucky enough to win with the same 3 symbols during the Symbol Storage feature, you will get to the Solo Performance Superspin level, which of course is the most rewarding of them all, since the entire reel set will contain the same symbol that will automatically reward you with a huge win!

Sounds exciting, doesn’t it? But it’s worth keeping in mind that Reel Talent is a very volatile slot, so we expect it to be difficult to get to the Solo Performance. That said, you can always try to make use of a casino bonus to help you get there. If you sign up with an online casino that offers new players a deposit match bonus you can get up to 200% of your first deposit in bonus funds, which you can then use to play slots like Reel Talent. Check out the casinos recommended below which offer titles by Just For the Win and which also welcome new players with a great deposit match bonus.

Where to play Reel Talent slot

Once it’s released, you will be able to play Reel Talent slot by staking from 10p up to £100 per spin. The game’s total RTP is a decent 96.03%, and volatility-wise it’s in the high range. Although hard to get to, Reel Talent slot has the potential to pay out 1210.5x your stake if you manage to fill up the reel set with the highest paying symbol during the Solo Performance feature. 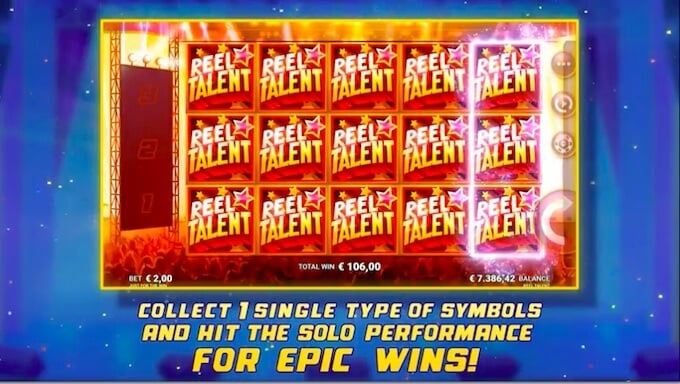 We expect Reel Talent to impress us with the show once it’s out, as indeed, everything seems to be designed to evoke that exciting talent show atmosphere. The visuals are colourful and flashy, and the soundtrack starts out on a mild note but really picks up once you get to the superspin levels, enhancing the thrill that precedes those big wins!

Once again, JFTW has been really creative and original with Reel Talent slot. We’re growing to love this developer, as its slots have their distinctive characteristics which really set them apart from the rest. Before it’s release, you can also try out Rainbrew slot to get a taste of this developer’s creativity. Ultimately, you don’t mind high variance, we have no hesitation in recommending Reel Talent, as we suspect this is a slot which we won’t easily get bored playing. Save the date and head to those casinos that offer Just for the Win slots on the 7th of November so as not to miss the show!