Rainbrew is an online slot from Just For The Win. Read our review below to learn about this game's free spins bonus round and more. 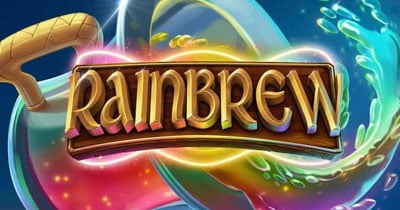 Developed by Just For the Win in partnership with Microgaming, Rainbrew is an original slot set inside a Leprechaun brewery, which offers players the opportunity to immerse themselves within a merry atmosphere, and to potentially attract some Irish luck their way as well! Read our full review of Rainbrew slot below to learn about this game’s exciting Sidewinder feature, a unique mechanism that boosts this game’s ways to win from 243 ways to 1125 ways!

Rainbrew is played on a 3x5x5x5x3 reel set and starts with 243 ways to win. Symbols on the reels include 5 lower-paying Celtic amulets, mugs of beer, pipes, barrels full of brew and two leprechaun characters, a male and a female, which are the highest-paying symbols. Rainbrew slot also features 3 wild symbols: a regular wild, a top wild and a bottom wild, which all substitute for other symbols except for the scatter. The Regular Wild lands on the horizontal reels only whilst the top Wild lands only on the second reel whereas the bottom wild lands only on the fourth.

If you land on 3 or more Rainbrew free spins scatters on reels 2, 4 and one of the horizontal reels, you will access the Rainbrew free spins round. 3 scatters will reward you with 6 free spins, whilst 4 will give you a total of 10 free spins. Yet, what we liked about this free spins round is that it was very easy to win additional spin – if you land on at least one free spins scatter anywhere on the reels, you’ll get 1 additional spin. What’s more, during the free spins round, the game’s Sidewinder feature remains activated, so that you’ll get 1,125 ways to win for the duration of the round. When wilds stop in the same position on both horizontal reels, these will expand to connect, so that you get regular wilds on the entire reel! 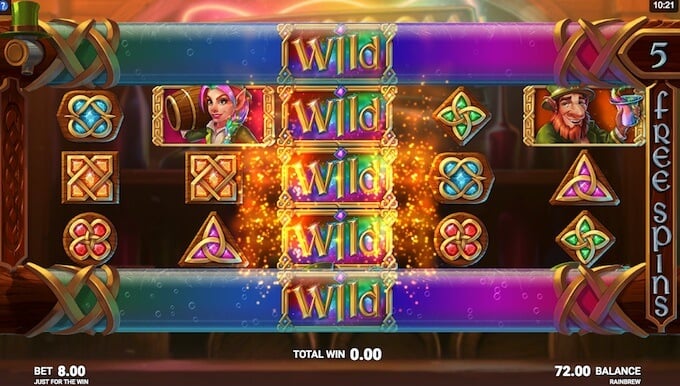 A lot of online casinos which we recommend on our website offer a welcome bonus for new players, and most of the time this involves a deposit match bonus. If you claim such a bonus, you will be able to play slots like Rainbrew with these additional bonus funds and win real money from them (subject to wagering requirements). Check out the below casinos, which are all offering Rainbrew slot, and make sure you claim the bonus if you’re a newcomer!

Where to play Rainbrew slot

You can now play Rainbrew slot by staking 10p to £100 per spin at a number of Microgaming-powered casinos. This game has a decent RTP of 96.02% and is of medium volatility. If you manage to get 3 wild columns by landing on corresponding wilds during the free spins mode, you can also win the game’s maximum payout out 2,720x your stake! 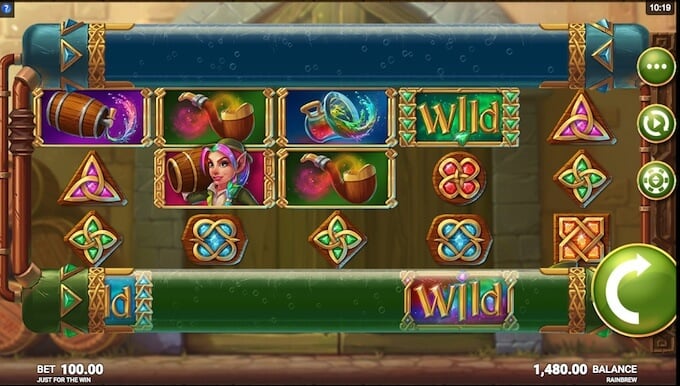 Rainbrew slot has been nicely designed to successfully convey a light-hearted Irish pub atmosphere. The animations are colourful and attractive, and are complemented by a merry soundtrack which will remind you of those traditional Irish pubs you’ll find across small villages in the Emerald Isle – if combined with a number of wins, the slot will definitely put a smile on your face!

We loved Rainbrew slot, particularly for its original mechanism and that rewarding free spins round which can be extended for quite a good while! If you love the gameplay and would like to try out a differently-themed game which works by means of exactly the same mechanism (and has the same RTP and volatility), we suggest you also play the new Sidewinder slot, which is due to be released in September 2018. In terms of theme, we liked Rainbrew more due to its vibrant design and the Irish folk music which makes the game so enjoyable to play, if you don’t mind it! Try it out today with a UK online casino, and best of luck!