The Phantom of the Opera

Microgaming is bringing back the famous protagonists from the Gaston Leroux story in the new The Phantom of the Opera™ slot, which is based on the successful 2004 film adaptation directed by Joel Schumacher. 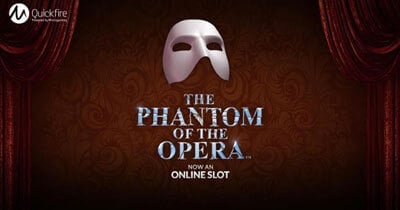 Play The Phantom of the Opera here

Name
The Phantom of the Opera
Provider

The Phantom of the Opera review

Packed with bonus features and surprises, the game offers plenty of drama and excitement, which perfectly reflects the Phantom of the Opera theme.

If you want to find out more about the game and see which best online casinos in the UK have already added it to their game portfolio, keep reading our full review below.

The Phantom of the Opera slot features

The Phantom of the Opera is a 5-reel slot with 243 ways to win that pays for left to right adjacent symbols.

Fans of the film will immediately recognize the symbols on the reels; these include scatter Phantom Masks which pay in any position if you manage to land 2 or more, letters, roses, scrolls, a vial of poison, binoculars, the monkey as well as various protagonists which include Christine and the Phantom himself.

The game also includes a wild symbol, which substitutes for all other symbols except for the Phantom Mask and the letter.

This wild, as well as Christine, Raoul and the Phantom may emerge double stacked on the reels for extra chances of landing winning combos.

The Phantom of the Opera slot free spins and bonus features

The base game of the Phantom of the Opera slot can result in the emergence of two features; when the letter symbol lands anywhere on the fifth reel, this will reward players with a cash prize of up to 20x their initial stake.

There is also a random Chandelier Bonus feature; in this case, you’ll see the Chandelier randomly drop onto the reels to turn 2 or 3 of them completely wild!

If players manage to land on 3 Phantom Masks anywhere on the reels, this will allow them to choose from 3 bonus features as follows:

The Music of the Night free spins feature: players are awarded 10 free spins during which the gameplay is considerably enhanced, with up to 5 randomly positioned wild symbols, up to 3 wild reels and between 2 and 5 additional free spins, as well as a multiplier of between 2x and 4x!

The Masquerade Pick Bonus feature: players are required to pick masks in order to unveil cash prizes! It’s also possible to win more ‘picks’ and level ups for another chance to win more!

The All I Ask of You free spins feature: players are awarded 10 free spins, during which the Christine and Raoul symbols turn into wilds and start dancing above the reels, before they move to a random position on each spin.

If they land on the same position, players will unlock a 3x multiplier.

On the other hand, if they land on the same reel, the entire reel turns wild, whereas if they land next to one another, both reels will turn completely wild.

The Phantom of the Opera slot bonus

Yet, as if this wasn’t enough, you’ll still find additional bonuses at online casinos, especially if you’re a new player.

Sign-up with one of our recommended casinos today to get a great welcome package, complete with free spins on slots like The Phantom of the Opera!

The Phantom of the Opera slot min/max bets, RTP, volatility and jackpot

You can play this medium volatility slot starting from a minimum bet of 30p up to a maximum of £15 per spin.

The game comes with a very good return to player percentage of 97% and the maximum possible win you can score amounts to £116,000 thanks to the bonus multipliers.

We’ve given the slot a few spins ourselves and found that the hit frequency is pretty good even during the base game; we triggered the letter prize after a few spins, but it was rather hard to activate the bonus games.

The Phantom of the Opera slot graphics and sounds

As they spin the reels, fans of The Phantom of the Opera movie will recognize both the lifelike actors on the reels, as well as the well-known original soundtrack to the film.

The sound effects as you land on winning combinations and unlock prizes are powerful and dramatic and serve to enhance the gameplay and add to the excitement. You can see the stage shrouded in darkness in the background, with the red curtains being left open to the side of the reels.

This backdrop changes during each bonus game, to feature other iconic scenes from this classic musical.

All in all, we think Micrograming did a pretty good job of bringing the popular film adaptation back to life in its Phantom of the Opera slot.

The Phantom of the Opera slot – our conclusion

Microgaming have come up with a great slot for fans of The Phantom of the Opera 2004 movie, with plenty of bonus features, prizes and chances to win decent rewards.

If you’re a true fan of this musical you might also want to check out NetEnt’s Universal Monsters: The Phantom’s Curse which will be out in January 2018 and which shall also include a number of extra features.

If we were to compare between the two, we’d say that Microgaming’s slot could potentially be more rewarding, but both slots include stunning graphics and gripping sound effects that will send shivers down your spine and make you want to keep spinning!

CasinoHawks wishes you the best of luck and plenty of fun at the theatre!