Set against the backdrop of an opera theatre, with impressive visuals and dramatic sound effects, NetEnt’s Universal Monsters: The Phantom’s… 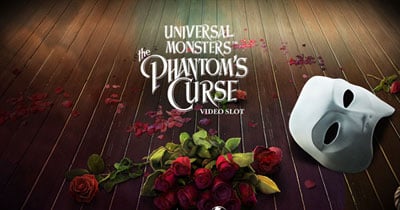 Set against the backdrop of an opera theatre, with impressive visuals and dramatic sound effects, NetEnt’s Universal Monsters: The Phantom’s Curse slot is based on the timeless Phantom of the Opera musical. This new NetEnt slot has been released on the 24th of January 2018 after a delay since July 2017, which had to do with Microgaming having released its own Phantom of the Opera slot. NetEnt’s own Phantom of the Opera themed slot has now been re-named and will be released under a license from Universal Studios, to offer an action-packed slot experience thanks to its stacked wilds, re-spins and bonus game. Read our full review below to discover what surprises NetEnt has in store for you and to learn which online casinos are already offering this slot.

Universal Monsters: The Phantom’s Curse is a 5-reel, 4-row video slot with 40 fixed bet lines that pay from left to right and 1 to 10 bet levels. Symbols range from low-paying clubs, spades, diamonds and hearts to medium-level knives, pearls, yellow roses and a ring. As would be expected, the highest-paying symbols are the portrait of Christine and the iconic Phantom, with the latter paying 36x your stake for 5 in a line.

During the base game, the first and fifth reels can feature 3 different stacked bonus symbols that also act as wilds. The stacked Phantom symbol can emerge only on the first reel, whereas the mask and Christine can appear stacked only on the last reel. 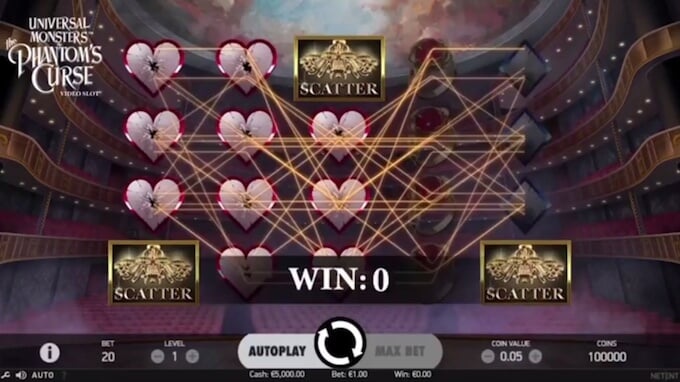 The slot also features a scatter symbol, in the form of the famous Phantom of the Opera chandelier that may appear on reels 1, 3 and 5 to trigger the slot’s free spins mode.

One of the most lucrative parts of the Phantom of the Opera slot is the free spins feature. To trigger it you need to land the Chandelier scatter symbol on the first, third and fifth reels at the same time. The Chandelier hangs in the opera hall over the reels supported by the ropes with each rope attached to every reel. Whenever the Masked Phantom symbol shows up on a reel, the attached rope will be cut off. Once all five ropes are cut, the feature will come to an end.

During the free spins round the masked Phantom symbols also become stacked covering the full reel and acting as sticky wilds, which provides you with plenty of opportunities to win up to the x800 your bet.

This NetEnt slot also features a bonus game, which is activated once the stacked phantom fills up reel 1 and the stacked Christine fills up reel 5; this takes place when a stacked bonus symbol lands as a block of 2 symbols on 2 of the 4 rows.

This Pick and Click bonus round unfolds in 2 stages; first the player has to pick a rose; some roses will uncover coins whereas others will reveal X blocker symbols which will lead to the next stage. During stage 2, players have to choose 1 mirror out of 3, which represent multipliers of either 1x, 2x or 3x the coin win earned from stage 1! Ultimately, this can result in a maximum coin win of 7200 coins.

Before you start playing The Phantom’s Curse slot, first you should seek a reliable online casino that caters for the UK and which also offers slots developed by NetEnt. This isn’t at all difficult given NetEnt’s popularity, and it will be even easier for you if you visit the casinos we recommend here on our site. Our trusted casinos all offer a safe and fair gaming experience, complemented with some amazing casino bonuses and offers!

Where to play Universal Monsters: The Phantom’s Curse slot

The Phantom’s Curse is of low to mediuim volatility and has a theoretical RTP of 96.57%. Bet amounts may range from 20p to £200 per spin, and the slot can lead to a maximum win of 160,000 or 800x the stake if you manage to land a full screen of high-paying symbols. Of course, this exorbitant win is extremely hard to trigger so make sure you don’t fall victim to the Phantom’s curse; set a budget and try your luck with discipline!

When it comes to this slot’s graphics and sound effects, it seems that NetEnt has once again done a good job; the animations and videos are state-of-the-art, and the music and sounds serve to evoke the suspense and thrill that one may expect from the Phantom of the Opera. It’s truly chilling to hear the sound of the knife cutting through the ropes to cause the chandelier to fall to the ground with a shattering sound. We’d say that this slot’s graphics and sound shall set it apart from other horror slots.

We can’t wait to be able to give this new dramatic slot a few spins in the hope of unlocking some of its various special features. From what we’ve seen, this game will offer a true bonus bonanza and plenty of excitement, and the gameplay is coupled with a truly professional design. Try it out today with one of our recommended casinos, and while you’re at it, have a look at our list of best new online slots 2018 to discover more recent releases that are worth playing!

Watch our exclusive video of Universal Monsters: The Phantom’s curse slot below: