The game is a collaboration between Playtech and Universal Studios, so apart from an incredible number of special bonus features, you can expect a very high-quality design and special effects as well as x10,000 jackpot payout. 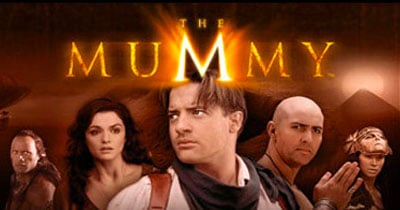 The Mummy is a Playtech 2012 video slot based on the famous blockbuster with Brandon Frazer and Rachel Weisz, released back in 1999.

Read our review to see if this slot lives up to the famous Hollywood movie.

The Mummy slot is set on 5 reels, 3 rows with 25 paylines and so many bonus features that it’s hard to imagine.

Egyptian theme translates itself in the whole array of special symbols including the blue scarab beetle, golden scorpion, treasure chests full of gold, old-fashioned pistols as well as loads of characters from the film including the scary Mummy itself and the game logo as a scatter symbol.

The main feature of the game is triggered randomly and called the Lost City Adventure Bonus.

It transfers you to the chamber full of precious gold treasures and presents you with a choice of 6 yellow crates, which hide cash prizes ranging from x1 to x4 times your bet.

After collecting the cash, you will also trigger the 6 extra bonus features that keep going one after another.

When this happens, you need to go and search the Mummies in the dark corridors and try to kill them to win some cash.

You will be able to kill anywhere from two to ten Mummies and get up to x3 your line bet per each killed Mummy.

In the Mummy slot, you can also enjoy the Free Games or Free Spins feature, which is triggered by landing three free games symbols on the first, third and fifth reels.

This will result in receiving 5 free spins and a Super Spin as well. During the 5 normal free spins, you will be able to collect the wilds and then use them during the Super Spin – they will be distributed on the 2nd, 3rd and 4th reels. The free spins cannot be retriggered.

You can try out the exciting and picturesque the Mummy slot at one of the most generous and trustworthy online casinos listed in this review and get a pretty impressive casino welcome bonus of more than a £1,000 and hundreds of free spins as well.

You can play the Mummy slot starting from a minimum bet of 25p and up to the maximum bet of £125 per spin.

This low to medium volatility slot has a return to player percentage set at 96,8% with the maximum jackpot of x10,000 your bet. To receive this jackpot, you’ll have to land 5 Brendan Fraser character wild symbols.

The Mummy slot graphics and sounds

Being a Hollywood franchise production of Playtech and Universal, you can be sure to expect the best quality graphics sounds and animations.

During the game, you will be able to watch bits of the movie, accompanied by the original dramatic soundtrack.

The game is beautiful, full of gold treasures and famous actors, so the overall entertainment level is extremely high. It actually also feels very modern and sharp, despite the original film being rather old.

The Mummy slot – our conclusion

Thr Mummy is certainly one of the most entertaining and captivating slots out there thanks to both fantastic theme and design and a very large number of different bonus features, each one of them helping you to win something extra.

The only minor downside here is that the Free Games, the Mummy Hunt, and the Lost City Adventure features cannot be retriggered.