Creative developer Elk Studios has just released its latest slot, featuring the animated Mr Lake and his companions in their fight against illegal hunter Mr. Romano. As one may expect from Elk Studios, all of these characters have been beautifully rendered as visually stunning animations. 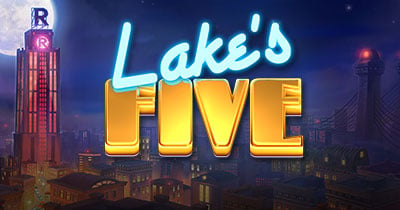 In this review, we’ll be taking a closer look at Lakes Five slot features, amongst which players shall encounter a bonus game, multipliers and respin wilds. Keep reading to find out more about this new release and to learn at which UK online casinos you can play it.

Lake’s Five is a 5-reel slot with 178 ways to win that’s been designed for mobile first. Symbols include bowls filled with diamonds, medical bags and Mr Lake’s companions, the Elephant, the Alligator, the Monkey, the Parrot and the Goldfish. The latter one is the most rewarding symbol, awarding 50x the stake for 5 in a line. Mr. Lake functions as the slot’s wild symbol and replaces all other symbols except for the Bonus key.

Two bonus scatter symbols serve to trigger Lake’s Five respins feature, at which point Mr. Lake appears to transform the scatters into respin wilds. The reels that contain a wild will now drop one row down after each respin, and respins shall continue either until a player triggers the Heist Bonus Game or until only 1 scatter remains on the reels.

The bonus game in Lake’s Five is called The Heist Bonus Game, and is triggered if you manage to land on 3 scatters. In this case, the captured monkey is released from Mr. Romano’s office at the top of the tower, and the bonus round begins with 10 free spins. During this free spins feature, players have to collect golden keys to unlock cascading wilds, which award additional free spins for every key they collect. If 3 keys are collected on the first reel, players unlock the slot’s Walking Wild feature, and will see walking wilds move a reel to the right after every free spin.

Once 3 keys are collected on the 3rd reel, players will trigger Lake’s Five Sticky Wild feature, wherein sticky wilds remain fixed in position. And finally, collecting 3 keys on the 5th reel will unlock the Climbing Wild feature, where climbing wilds will now move upwards, climbing 1 row at a time after each free spin.

During this bonus game, if wild symbols bump into each other and end up in the same position, this will unlock a 2x or 3x wild for that free spin. If all 3 features are triggered, the monkey is released from its cage and players will benefit from 9 additional free spins, which results in a total of 19 free spins from this bonus round!

Another interesting feature within Lakes Five slot is the ability for players to control the betting strategy via the game’s Bet Level selector. Players may change the bet size according to the outcome of the previous spins, which is something that can work well in combination with the game’s Auto Spin feature.

If you intend to play Lakes Five for real money, then we don’t blame you if you’re after a casino bonus to help stretch your bankroll. Check out our list of online casinos that will be offering Lake’s Five slot as from this April, and if you’re new to them, make sure you take advantage of their welcome offer before you play.

UK players can now play Elk Studios’ Lake’s Five slot by staking from 20p up to a maximum of £100 per spin.

The slot has a decent RTP of 96.3% and can be classified as one of medium to high volatility. The maximum amount you can win from this slot amounts to 2,160x your stake on a free spin featuring the 3x wild multiplier.

Lakes Five features the superb graphics typically expected of Elk Studios, with beautiful animations and transparent reels set against a cityscape at night.

Mr Ronaldo’s tower is prominent in the background during the base game, whereas the free spins bonus game takes place inside the office, where one can see the poor little monkey locked inside its cage.

The music accompanying the gameplay is relaxing and toned down, with the faint sound of cars speeding through the city in the background.

Lakes Five has enough features to keep you entertained for a couple of evenings, and can provide huge wins thanks to its wild multiplier, as well as through the like-symbol combinations that may fill up the whole screen.

We did find the bonus game very hard to trigger as we played the demo mode though, although we did get big wins via the wild respins. In our opinion, we found other Elk Studio games to be more innovative; one may mention Wild Seas and Kaiju slot as an example.

But why not try out Lake’s Five slot for yourself with one of our recommended casinos? Check it out today and remember to claim a bonus if you’re new to a casino!