Prince of Olympus is a slot game and a part of the Age of the Gods jackpot series by Playtech.… 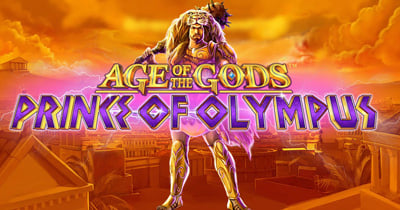 Prince of Olympus is a slot game and a part of the Age of the Gods jackpot series by Playtech. The whole series concentrates on Greek Mythology. And Greek Mythology as we know has a lot of offer in terms of epic characters and dramatic plots.

This particular slot instalment is based on Hercules, the son of Zeus known for his incredible strength and 12 famous labours or adventures. The game has a lot to choose from regarding bonus features, design and, of course, 4 progressive network jackpots.

Age of the Gods: Prince of Olympus slot features

The slot is set on 5 reels with 25 paylines, with the symbols apart from the typical card values including golden apples, scary spiked club, jewels and the three-headed Cerberus dog.

The Wild symbol is the Mighty Hercules himself appearing on the second, third and fourth reels to substitute the other game symbols apart from the bonus and the scatter.

The game has four quite impressive bonus features that we’re going to check out now.

This feature, which is triggered by landing the Hydra Bonus Symbols on the 2nd and 5th reels, takes you to a separate screen in the middle of the sea where you meet the multi-headed Hydra and need to shoot its heads with the arrows to reveal your random cash prizes for each head. Slay the Hydra to receive a x5 multiplier on top of the cash bonuses. 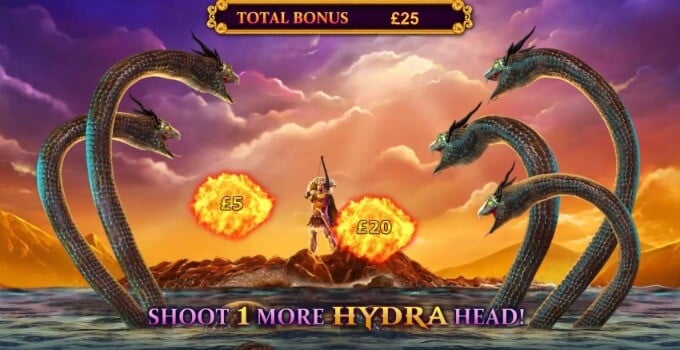 It’s a simple randomly triggered bonus game that lets you destroy all the Hydra’s heads and is quite similar to Hulk’s Rage feature from the Playtech’s Incredible Hulk slot.

Trigger this feature when the Wild Symbol of Hercules appears in the middle of the 3rd reel. The Hercules will then expand to show his powers and give you two re-spins with the expanding wild locked on the third reel. If during the 2 re-spins Hercules wild appears again on the any of the 3 middle reels it will expand and cover all three reels for one more re-spin. If at that moment you get 2 matching symbols on the 1st and 5th reels you can get some pretty decent winnings in this feature.

Age of the Gods: Prince of Olympus slot free spins

The Free Games or Free spins feature in the Prince of Olympus slot is very decent indeed. It can give you up to 20 free spins with three times multiplier. Initially, you get 10 free spins for landing three Hercules scatters. If during the free spins round three more scatters appear, you will retrigger 10 more Free Spins with x3 multiplier. 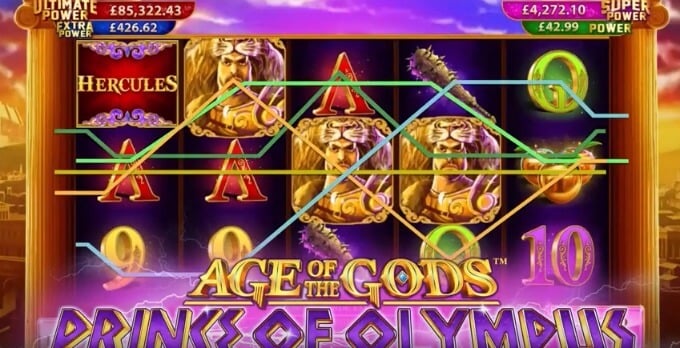 Where to play Age of the Gods: Prince of Olympus slot and get a casino bonus

Play Prince of Olympus and other slots from the Playtech’s Age of the Gods series at the most respectable UK online casinos and enjoy the biggest exclusive welcome bonuses on the market by following the links below.

Age of the Gods: Prince of Olympus slot min/max bets, jackpot and volatility

You can play Prince of Olympus slot starting from a minimum bet of 25p and up to the maximum bet of £500 per spin. The return to player percentage for the base game is set to 93.83%, but it can go up to 94.82% if you randomly hit and activate the jackpot game.

The 4 progressive jackpots game includes the Power, Extra Power, Super Power and Ultimate Power jackpots – to reveal your jackpot you have to hit the coins on the 5×4 grid. Remember that the more you bet the higher your chance of winning the biggest jackpot out of four. 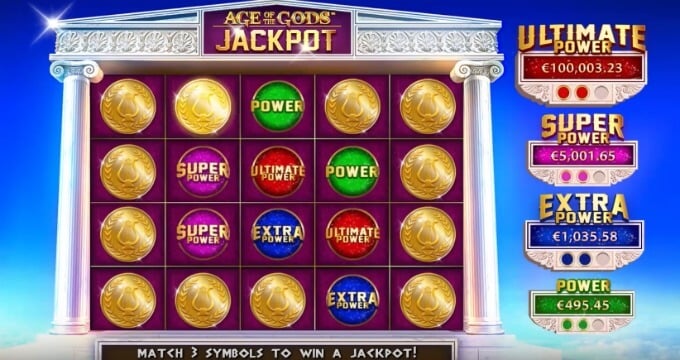 Age of the Gods: Prince of Olympus slot graphics and sounds

The quality of this slot is impeccable from the design point of view with rich colours, lots of gold and light, powerful Hercules and very detailed symbols. All together they create an impression of a very high-quality slot. The Hydra feature is visually quite entertaining, and we really enjoyed shooting the arrows to kill the multi-headed Hydra.The slot has epic music similar to the soundtrack of the other Age of the Gods series slots.

Age of the Gods: Prince of Olympus slot – our conclusion

Either you are into the Greek myths or couldn’t care less about them, this slot has a lot to offer to anyone. It’s epic, visually spectacular, has enough bonus features and free spins as well as, of course, 4 progressive jackpots with the biggest one capable of growing to more than a million. If you like Playtech’s Marvel Jackpot Series, this could be a very decent alternative.

Watch Age of the Gods: Prince of Olympus slot video preview below: