Get ready to join Eric Shipton on his 1951 expedition to Mount Everest and follow the Yeti footprints into the unknown. This time, unlike Shipton's expedition which never found the Yeti, we are going to encounter this mysterious creature in this beautifully designed slot by Yggdrasil in collaboration with 4ThePlayer, a small indie studio based in London. 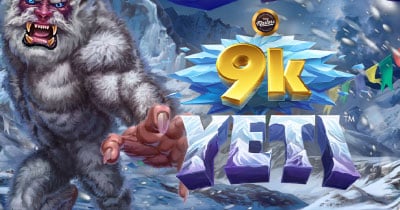 A creature of myth that has sparked the imagination of hundreds of people over the years, and been at the centre of numerous movies and animations, it is now the protagonist of a slot game, bringing players a fresh take on the mysterious snowman.

An interesting concept that compliments really well the overall theme is the inclusion of the maximum payout in the name of the slot: 9K. The number at the beginning of the name does not only ensure that it attracts attention but also places the game at the beginning of casino game lists that are sorted alphabetically. Nice trick 4ThePlayer! This small provider certainly has a few tricks up its sleeve so let’s see what other tricks they have in store for us in this 9K Yeti slot review.

Our adventure on Mount Everest takes place on 6×4 reels with impressive 4,096 ways to win.  On the reels, we find the usual 10 to A card suit together with two different climbers and climbing gear like tents, ropes, ice picks, and Sherpas. Since this is a Yeti themed slot, we find the legendary creature itself, carrying the highest value amongst all symbols. The wild of the game is represented by the image of Mount Everest with the Wild logo and just like any other slot, it substitutes all symbols with the exception of the scatter which is represented by the Yeti footprint, which historically started all of the Yeti speculations.

An interesting feature that the developers included in this game is ideal for those players who enjoy playing slots from their mobile. Players accessing this game from their smartphone can choose between playing the 9K Yeti slot in the classic mode or else in 4ThePlayer’s new mode: Big Reel Portrait Mode. This new mode spreads the game over 60% of the screen instead of the usual 20%, by staking the reels in a way to allow them to spin right to left.

The base game doesn’t get much action, however, once you land 3 or more scatters, that’s when things start getting interesting. Awarding 8, 15, 40 and 88 free spins respectively, the free spins feature can be retriggered several times with a possibility of obtaining 880 free spins. Not shabby at all!

The free spins feature unlocks the Snowstorm feature, which comes into play when you land a Yeti and a wild on the reels simultaneously. This causes a wind to blow across the reels, blowing the symbols right off and shuffling them around until they form a winning combination.

Most of the casinos that offer games powered by Yggdrasil will definitely feature this game in their new games sections. Some might even offer free spins to use specifically on this slot. Thus, we advise checking your casino of choice promotions page for such an offer. Furthermore, casinos may include it into one of their tournaments with interesting prizes for those players who qualify amongst the first few places. So check out your casinos’s tournaments page to keep up to date. In the meantime, we have included a list down below of 5 casinos which are featuring this slot in their vast game collections. Each of these casinos offer a generous casino bonus which you can claim and use on the 9K Yeti slot.

Where to play 9K Yeti slot

If you want to take a few spins on this slot you don’t need to break the bank as it can be played for any bet between £0.10 and £25. It comes with high volatility so don’t expect frequent wins, however, there’s also an impressive RTP of 97% at play. When it does award wins, it pays well, with a maximum payout of 9,012 times your bet. Against the maximum bet allowed the jackpot is a staggering £225,300.

The graphics of this game are very well designed with plenty of details that take us to the famed summit of Mount Everest. Clear skied with only small pockets of clouds, the weather in this game can change as quickly as on the actual mountain if you trigger the Snowstorm feature. Once it comes into play, the sky darkens, snow starts falling and the wind picks up the symbols on the reels as if they were leaves and shuffles them about.

The characters and symbols that inhabit the reels are done in great detail with particular attention to the Yeti, the protagonist of this slot. There isn’t much animation going on until you hit the Snowstorm feature.

The music that accompanies this slot invokes the spectacular landscape of the famed mountain, with gentle music and wind chimes to accompany you along your Mount Everest climb to the summit. The music springs to action when you hit the Snowstorm feature adding to the tension as you wait anxiously for the chance to win.

9K Yeti slot – What we think

9K Yeti slot does not have any features that we haven’t seen before and some might argue that there is nothing special about it, however, we found plenty to enjoy in this game. 4ThePlayer is a game provider with a few tricks up its sleeve that might surprise us in the future, thus we will keep an eye on them as we look forward to their next release. As a high volatility slot, don’t expect frequent payouts. Patience is key in this game, as you might have to wait for a while to land enough scatters to trigger the free spins feature and enjoy some action. All in all, there is plenty of fun to be had with this game, so check it out and enjoy!