With enticing animations, bobbing zombies, and a roaming wild, the slot promises high volatility made all the more thrilling through a series of progressive free spins. 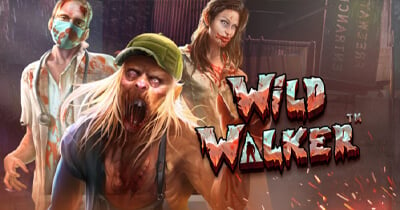 In this Wild Walker review, we’ll relive the experience of the characters from mega-hits like the Walking Dead TV series, so keep on reading to find out more!

The 96.55% Wild Walker RTP is above average with a maximum payout potential of over half a million pounds. But let us find out more about Wild Walker slot and all the promising entertainment from the review down below!

In our Wild Walker review, we could chase the wild zombie across the 5 to 8 reels, where a total of 25 paylines, running from left to right, award wins for three or more matching symbols across a line.

The Wild Walker RTP is theoretically 96.55%, making it slightly higher than the industry average. However, the real rewards come in when you unlock the bonus rounds, including four wild zombies.

Before the zombie apocalypse arrives, let’s break down what the symbols are, so you’re aware of what holds the most value.

The most frequent visitor, a zombie with his guts out, will appear extended on any of the five base reels. He’s our wild card that can replace anyone and everything except the scatter.

The scatter symbol is marked by a gas mask (you can imagine the pungence of the zombies).

Moving to traditional symbols, we have the jack through to ace. They’re followed by the test tubes and injection gun.

The stars of the show succeed these; a female zombie fighter, a lab assistant, a zombie hunter and the manic looking scientist.

The royals have the lowest value, contributing a maximum of 500 times when you secure eight across the slot. The scientist unlocks an exciting 10,000 times across eight.

The minimum bet per line is set at 0.01 credits and the maximum is 5. However, the minimum you’ll wager per spin is 0.25 and max of 125, to cover all 25 paylines. Regardless of where you’re playing Wild Walker from, the credits translate to local currencies such as the USD, GBP, AUS, CAD, EUR on a 1:1 basis.

The Wild Walker RTP sits at a relatively high 96.55%, slightly higher than the industry standard. When you’re spinning in the base game, landing on a winning pay line is rewarding, but we wouldn’t say it reaches the same lucrative level as the bonus round.

The roaming 1×3 zombie switches between the five base reels, which increases the hit rate. However, when you’re playing, it doesn’t feel like it changes the hit frequency compared to most other slots.

In our Wild Walker review, we found it has a five out of five ratings on volatility. In other words, you can expect a couple of low rewards, but once in a while, you’ll hit some massive wins.

Wild Walker slot comes with a maximum payout potential of 4980x your bet, which when multiplied by the highest bet, can award over a million pounds as a jackpot.

The multipliers accumulate the more symbols you get, especially if you land eight mad scientists, which trigger a 10,000x multiplier.

In the Wild Walker slot, we found the game reasonably simplistic, without too many flashy features. The most crucial aspect of the game comes from the name itself – a zombie symbol that features in every spin. He becomes even more valuable and exciting when you unlock his friends in the bonus game.

Wilds and Base Game Features

In the base game, you’ll encounter the wild zombie walker every time you spin the slot. He appears randomly throughout the five reels. Three gas mask scatter symbols are what you’ll be waiting for to take the game to the next level!

The wild symbol is represented by the 1×3 size zombie that walks among the five reels. Whenever you spin, he’ll randomly change to a different row, taking up the full three lengths.

He replaces every character and item in the game, apart from the scatter symbol.

During the Wild Walker review gameplay, we were after the gas mask bonus symbol the most. Landing three in a pay line unlocks eight free spins within the bonus game, which is split into four levels.

As you collect bonus symbols, you accumulate more free spins, eventually moving up to the next level.

The bonus game works just like the base game. Here, though, you can unlock more reels and receive more free spins by collecting bonus symbols; all you have to do is keep spinning.

Level one will unlock when you collect three gas masks in a base game line. You have eight free spins and play as usual.

You can unlock level two by collecting four gas masks in the main game or collecting three in level one. Once it’s unlocked, an additional reel will hold a wild locked zombie symbol.

After another three bonus symbols, you receive another reel with a wild card depicting an imprisoned zombie.

Finally, you can unlock level four with a further three bonus gas masks. The third one will release the last locked zombie. You’ll have eight reels open, and four wild card zombies.

The more bonus symbols you collect, the more free spins you accumulate.

This zombie slot takes you to a post-apocalyptic era, complete with cars on fire and a daunting town. The zombies are here, and they want brains!

Pragmatic Play has done an excellent job in the animation of the zombies limping in their positions. The game itself is streamlined, with the reels running smoothly. We love the 80s groovy inspired rock that brings the undead to life.

Other Slots to Play If You Like Wild Walker Slot

Zombie-themed slots are a hit in the gambling community. Some similar ones include NetEnt’s Zombie slot and Leander Games’ Zombie Rush if you enjoy these kinds of titles.

Our Wild Walker review concludes that this slot brings a new dynamic to the meaning of a wild symbol and free spins. Unlocking additional reels with three extra 1×3 zombies significantly increase your chances of multiplying your winnings and profiting on those free spins.

One of the biggest nuisances of the game is the main feature, the Wild Walker.

The addition would have players assuming you stand a better chance of landing a pay line sequence when it doesn’t alter the odds at all. It would bring a better dimension if it were a 1×2 undead being moving through the five reels.