White King 2 is an online slot from Playtech. Read our review below to learn about this game's stacked wilds, multipliers, and more. 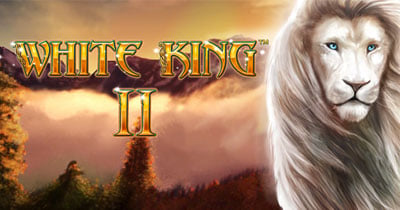 The popular game developer Playtech has just released White King II slot, the sequel to the previous White King, a lion-themed game featuring a regal white lion as its premium symbol. White King II looks very similar to its predecessor, yet on his return the king of the jungle is fiercer and mightier than ever: players will be pleased to find double symbols on the reels and a free spins feature with additional stacked wilds and stacked double wilds, all of which boost the game’s win potential significantly. Read our review of White King II slot below to find out all about it and to discover which online casinos are already offering it as part of their portfolio. 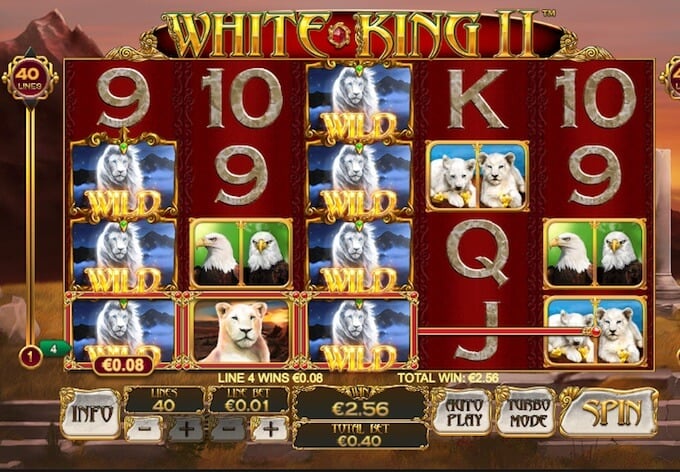 White King II is a 5-reel slot with 40 paylines which includes both ‘regular’ symbols as well as ‘double’ symbols, made up of two symbols that occupy the same reel position. Symbols on the reels include 9 to Ace playing card symbols and higher-paying lion cubs, eagles, lionesses and golden crowns. The fact that the animal symbols can land as double symbols means that they will count as 2 single symbols, so that a five-symbol combination of doubles will actually pay out as 10 of a kind! There’s also a wild symbol, which is the White King himself and which is also the highest paying symbol. The lion wild can also land as a double symbol to lead to the game’s highest wins.

The free spins feature, or ‘Majestic Night Free Games’ feature in White King II slot is triggered if 3 or more White King logos appear on the 3 middle reels. We triggered the free spins in White King II by landing on a scatter symbol and a double scatter on two of the reels, which goes to show that those double symbols certainly make a huge difference! Players will get 5, 15, 25 or 50 free spins for 3, 4, 5 or 6 scatters respectively. These scatter symbols will also pay out (3, 8, 10 or 50 x your stake depending on how many you land). 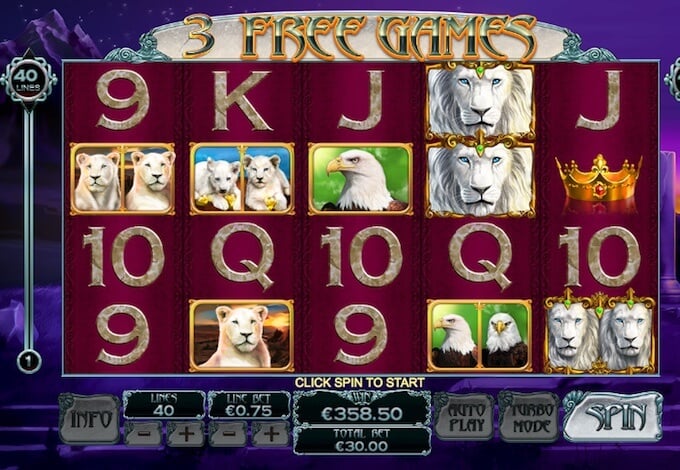 During this free spins round, more wilds and double wilds will appear on the reels, which will also be stacked on all reels. This will most definitely guarantee a big win, so if you trigger these free games, you can rest assured that the round won’t end in disappointment. What’s more, this feature can be retriggered indefinitely if you keep getting 3 or more scatters. If you fill all the reels with stacked double wilds during the White King II free spins round, you’ll get the maximum win of 5,000x your stake!

What if you could play White King II slot for real money without staking any of your own? This is possible to a certain extent if you claim a good casino bonus. The best bonuses to play all kinds of slots are deposit matches, which involve a percentage match of your deposit in bonus funds (for example a 100% bonus would give you an additional £20 in bonus funds if you deposit £20). You can get a deposit match bonus if you sign up with an online casino as a new player. Check out the ones below, which will also be offering White King II slot in the near future.

You can play White King II slot by staking from 40p to £400p per spin. Unfortunately, we were unable to find the game RTP, but volatility is in the medium to high range, with the hit frequency during the base game being pretty decent, although it is tough to trigger the free games mode. The maximum payout you can expect from this slot is a massive 5,000x your line bet if you land on stacked double wild symbols during the free games round.

Design-wise, White King II isn’t particularly captivating, and looks very similar to the original White King slot, which just a change to the background and colour scheme. The background music is calm and soothing, and the sound effects as you land on the wins are reminiscent of those old-style slot machines. It will appeal to those who like animal-themed slots and who favour a more simple and straightforward game.

White King II slot is a pretty simple game, and initially the base game may not impress, possibly due to the large number of low-paying symbols. However, the more we played it, the more convinced we were that this game is certainly worth a number of spins. Payouts with higher value symbols are frequent, and when we activated the free games, we pocketed a big win which gave a really good boost to our bank roll. Try it out for yourself with one of our recommended online casinos and find out whether the mighty beasts of the jungle will play along with you! 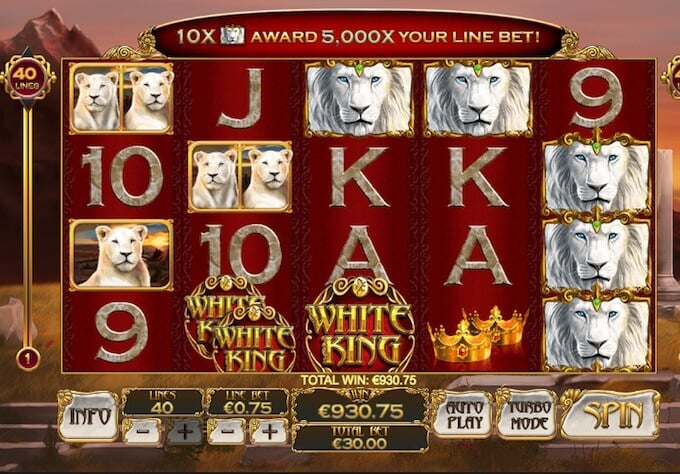