Vikings Go to Hell is the third Yggdrasil slot in its popular vikings series. Featuring plenty of action in both the base game and its 3 free spins modes, this slot will appeal to anyone looking for variety and thrill. 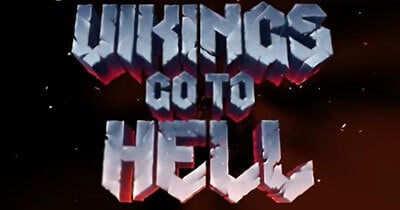 Attention all warriors! Yggdrasil Gaming has just released its third Viking-themed game, Vikings Go to Hell slot, which you can now play at various online casinos powered by this great video slot developer!

Given the popularity of both Vikings Go Wild and Vikings Go Berzerk slots, we expect this new release to be all the rage this Spring!

Keep reading our honest review to learn all about Vikings Go to Hell slot, and to find out which online casinos are already offering it as part of their collection!

Vikings Go to Hell will be a 5×4 slot with 25 fixed paylines that pay from the leftmost position.

This slot is set against a hellish backdrop populated by demons which four brave Vikings have to fight in order to trigger various rewards.

As players start spinning the reels, they will be collecting so-called ‘rage points’, beginning with 150 rage points for a Viking.

These points are collected with wilds that are obtained after a battle is won or via the base game treasure chests (which we’ll explain in more detail below).

Symbols in Vikings Go to Hell slot consist of 4 weapon symbols and 4 Viking symbols, as well as a wild symbol which replaces all other symbols except the scatter.

The scatter is a Free Spin symbol which can appear anywhere on the reels.

If players only land on 2 Free spins symbols, this will trigger the slot’s respins feature, to give players a chance of getting a 3rd free spin symbol on one of the other reels.

All wild symbols will also remain sticky during this re-spin, to increase your chances of landing on a win.

During the base game players will also be looking out for treasure chests which will appear only on the fifth reel to reward them with an ‘Epic’ or ‘Good’ tablet that can lead to the following prizes:

Also during the base game, two or more Free Spin symbols will also trigger the Demon Fights feature, which leads to a demon fight with each Viking on the reels.

If the Viking beats the demon and wins this fight, he will turn into a wild symbol and the player will get 1 rage point.

There’s another reason why Vikings Go to Hell slot is likely to be all the rage this year.

Apart from its action-packed base game, this slot will also come with three free spins modes that can be activated in different ways.

The first level is triggered by landing on 3 or more Free Spin symbols. 3, 4 or 5 free spin symbols award 7, 12 or 16 spins respectively, and all Viking symbols will have to fight a demon for a chance to award you with points and turn wild.

The Lord of Chains will appear at the end of each free spin when at least 1 Viking symbol is visible on the reels. A fight shall take place between this Lord of Chains and one random Viking, and if the Viking gets a hit on him, it turns into a sticky wild and one of the Lord’s 3 health bars is removed.

Three hits will ensure that the Lord of Chains is defeated and leads to the second level of free spins that will be played at the end of level 1.

Level 2 free spins consist of 7 free spins, at the end of which 1 Viking is randomly chosen to fight the demon Lucifix.

Every hit on Lucifix shall award 2 sticky wilds and the Viking himself will also turn into a sticky wild.

A health bar is removed from Luxifix’ s life, and if you manage to get 3 hits, his defeat will result in a 3x multiplier to the total winnings from the free spins round!

What’s more, all Vikings are then guaranteed to win their fights with regular demons during the remaining free spins, to award you with even more rage points!

Finally, the Berzerk free spins feature is triggered when players manage to collect 300 rage points on one Viking.

These are the same as the level 1 free spins, with the difference that players only get 7 spins, and the Viking that triggered the Berzerk mode will always win when he fights against the regular demon.

If a Viking is in berserk mode, he will remain so throughout this feature, even if the player progresses to level 2.

If the above sounds a bit complicated and you’re not sure you’d like to risk your own money on Vikings Go to Hell, why not try it out with some bonus funds or a handful of free spins?

If you join our recommended casino, you’ll get a welcome package which may consist of an excellent deposit match bonus coupled with free spins on slots like Vikings Go to Hell.

What’s more, given the popularity of the previous two slots in this range, a lot of online casinos will be running special promotions for existing players on Vikings Go to Hell.

To find out about other special promotions, visit our offers section, which we update on a regular basis.

UK players are now able to stake from 10p up to £100 on Vikings Go to Hell slot.

The slot comes with a decent RTP of 96.1% and is of medium to high volatility (reportedly more volatile than its prequels), with a potential to win 3,500x the stake thanks to the 3x multiplier.

Vikings Go to Hell slot features high-quality graphics with monstrous demons and plenty of red-hot flames flying around against a predominantly dark background.

As you trigger the free spins feature, the Vikings symbols on the reels will come alive to fight the demons.

Naturally, the soundtrack reflects all the action and horror taking place on the screen, serving to powerfully immerse players within the battle.

It seems that Vikings Go to Hell will provide that desired dose of excitement that is expected of the Vikings theme.

We like this game for its additional features, both during the base game and during its free spins modes.

If you love Norse mythology and would like to discover other Viking-themed slots by Yggdrasil, we recommend you also try out their recent Gem Rocks slot, and of course, the other games in the Vikings series.

Start collecting rage points to reap the rewards and remember that with Yggdrasil, the surprises keep coming!