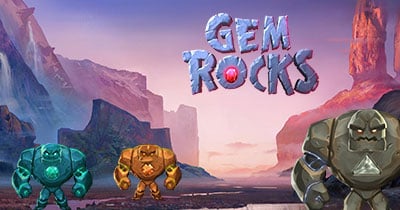 Yggdrasil game developer shall be releasing a new slot that sounds extremely promising this February 2018 – Gem Rocks slot will feature cascading wins, cluster pays and an attractive bonus feature which shall help you secure bigger wins; if you’re not intimidated by those win-crushing giants, keep reading our review below, where we’ll share what we’ve learnt so far about this upcoming slot.

Gem Rocks is a 6×4 video slot with 4096 ways to win set in a world made predominantly of rocks and gems, inhabited by gem-hearted giants. Players will unlock wins for landing on a cluster of 3 or more similar symbols. These symbols include 8 types of gems, with the highest paying one being the star, which pays out 75 coins for a cluster of 5. In Gem Rocks, players will trigger the drop down wins feature once they land on a winning combination, which cause winning symbols to disappear from the grid to make way for other new symbols which will drop down. This keeps on occurring as long as new winning combos are formed. 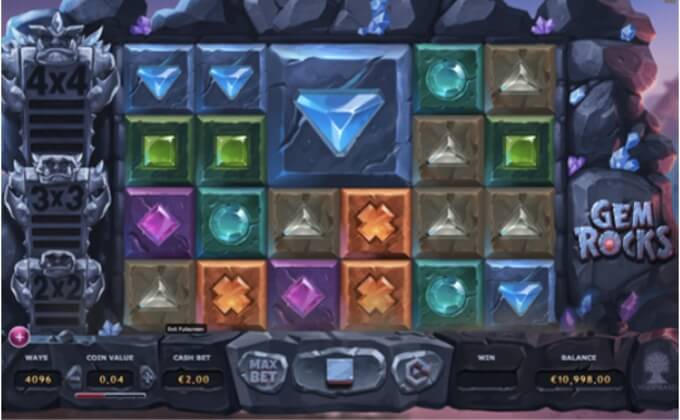 The highlights of this slot is likely to be the Gem Rock Feature, which is activated when players land on 2, 5 or 9 drop down wins in succession. Once this feature is triggered, a gem rock lands on top of the reels, which is made up of randomly chosen identical symbols and whose size varies according to how many times you’ve won.

Naturally, getting the 4×4 gem rock will lead to big wins, especially if this gem rock contains one of the higher value symbol.

Once Gem Rocks is released, we recommend playing this slot with the help of a good casino bonus to help you increase your chances of winning. All the online casinos we recommend are safe and award very rewarding bonuses to both new and existing players. Needless to say, such bonuses are especially helpful when trying out new slots, to help you decide whether a slot is worth playing for real money or not.

Where to play Gem Rocks slot

Players will be able to play Gem Rock slot across all devices by staking from 25p to £100 for each spin. Gem Rocks will have an RTP of 96.3% and its volatility will be in the medium to high range. On this innovative slot, players may expect a maximum win of 2,500x the stake! 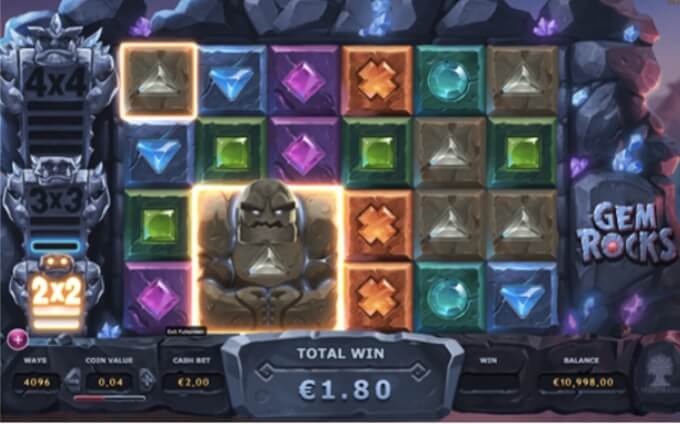 Gem Rocks is set in a rocky mountain terrain populated by adorable looking rock giants. The monster meter to the left of the screen displays your number of consecutive wins, so you may keep track of your progress. The symbols on the reels look relatively simple and standard, but of course you won’t mind this when you start landing on those cluster wins! We haven’t been able to play Gem Rocks slot ourselves yet so we cannot really comment about the music and sound effects.

It looks like Yggdrasil have come up with a very rewarding slot with an interesting mechanism. We can’t wait to try out Gem Rocks ourselves once it is released to see how many consecutive wins we’ll manage to land. Make sure you stop by again in late February to read our updated review of Gem Rocks slot and to find out which online casinos will be offering Gem Rocks as part of their portfolio! In the meantime, if you’d like to try out another recent Yggdrasil slot, we can recommend playing its Orient Express slot, which has beautiful graphics and some interesting features as well.