"Hey, you guuuuuuys!" Check out Blueprint's original The Goonies online slot loaded with some of the best gaming features and filled with nostalgic animations and sound effects from the classic film. 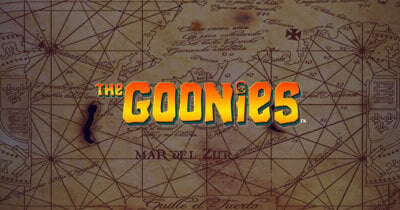 Join the gang as you look for riches with The Goonies slot machine. This addition to the Blueprint Gaming catalogue comes with medium volatility, 96.00% RTP, 20 paylines, and a truckload of features. Read our full review to find out more:

How I tested The Goonies

I identified the most important criteria when testing the special features of The Goonies online slot:

Play The Goonies with the best bonus

UK players can enjoy playing The Goonies at all of the following top casinos in the UK:

If you’re looking to try out The Goonies slot machine, then Parimatch is the best place to do so. Not only is it a reputable place to play, but you’ll receive a £40 welcome bonus to enjoy on The Goonies online slot.

The Goonies slot machine comes with a classic 5×3 grid. The highest paying symbol is the wild, which takes on the form of an artefact. Next, come the Super Stacked pirate flag, the treasure chest, the pirate ship, the skeleton, and the balance scales.

The lower paying symbols of The Goonies online slot are typical card icons A, K, Q, and J. The game’s scatter symbol is a skeleton pirate with the word ‘Bonus’ written across it.

The Goonies slot machine has 20 active paylines, all of which go from left to right. If you complete more than one payline during the same spin, the prizes will be added up and paid out as one.

The bet value choices range between £0.10 and £200.00. You can choose to play manually or by using autoplay. If you prefer the latter, you’ll have a choice between 10, 25, 50, 75, and 100 spins. You can also set your loss and win limits. You can stop this feature at any time by clicking on the autoplay button again, which changes into a stop button.

We found The Goonies slot machine to have medium volatility.

The Goonies online slot doesn’t have a jackpot feature, but you can win up to 250,000 when playing with a maximum stake. This translates to 50,000x your bet.

The Goonies slot machine is one for every kind of player. This is clearly seen by the wide range of bet values that cater for both low and high rollers. The game’s got average RTP and medium volatility which means you’ll get a fair share of wins. Considering the features, you could win up to 50,000x your bet – this means you have the potential to walk away with up to 250,000 coins (when staking the maximum, of course). That’s quite the prize!

The wild substitutes for all symbols (except the scatter) on The Goonies slot machine to complete or enhance winning combinations.

One-Eyed Willy’s Riches are modifiers that are triggered randomly with any spin during The Goonies slot machine’s base game. Three keys will appear and you’ll get to select one. Doing so will reveal one of the following:

Other base game modifiers include the scythe, which resets the reels to give you a guaranteed win, and the cave collapse which can occur to reveal a win.

Landing three or more bonus symbols anywhere on the reels will trigger The Goonies online slot’s bonus wheel. Give it a whirl to reveal which of the six bonus rounds you’ll play:

Finding the COLLECT icon in any of the bonus rounds ends the game and takes you back to the base game.

You can choose to collect or gamble any of the bonus features except for the One-Eyed Willy’s Treasure Bonus. If you choose to gamble, you’ll choose between the six features, all of which show their average payout according to your stake. Pick the one you want and if you win, all the features below it will be eliminated.

You can choose to collect or gamble again at this point. If you keep going and reach the top of the scale or if you land on the Mystery Win segment, you will be rewarded with a Mystery Win Prize. Keep in mind that if you lose, you will lose any prizes and the feature trigger on The Goonies slot machine.

Find your riches with The Goonies online slot’s features

Blueprint Gaming has given The Goonies slot machine plenty of modifiers and special features to keep the game both entertaining and interesting. First off, you’ve got eight modifiers in the base game which give you wilds, stacked reels, and other nifty features. Then there are the six bonus rounds which award free spins, bet multipliers, and more. The One-Eyed Willy’s Treasure bonus is my favourite, though, as you’ll keep collecting bet multipliers until the booby trap is triggered. Big thumbs up!

Be part of the gang with The Goonies slot machine

You’ll find the audiovisuals of The Goonies online slot to be quite intriguing. The grid sits on the treasure map and some of the modifiers come with 3D effects. As for the music and sound effects, they’re mischievous and adventurous – exactly what you’d expect from this kind of game.

As usual, Blueprint Gaming has outdone itself with its creation. The Goonies online slot is one for every kind of player – even those who haven’t seen the movie. You’ve got medium volatility, 96.00% RTP, and 20 paylines. Your chances to win are increased with eight modifiers in the base game and six exciting bonus rounds. You can even choose to gamble your features for bigger rewards.

All with a maximum prize of 50,000x your stake – check The Goonies slot machine out and see for yourself!

Other slots to play if you like The Goonies slot

If you enjoy playing The Goonies online slot, check out these other action-adventure titles: