If you’re a dog-lover, Pragmatic Play’s The Dog House Megaways might appeal to your nature. This slot features a cute dog theme that bites hard with its high volatility and RTP of 96.55%. 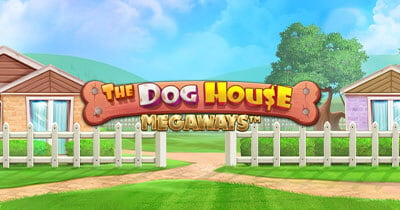 This slot is the sequel to the developer’s 2019 game, The Dog House, and incorporates a fresh look along with the popular Megaways engine.

Here, you can trigger 117,649 pay ways, as well as two different free spins games: sticky wilds and raining wilds. If we’re talking numbers, the maximum payout possible is just over 12,000x your stake, which works out to around £1.2 million at the highest bet.

Will this game match up to the popularity of Pragmatic Play’s original creation? Find out in our detailed The Dog House Megaways Slot Review below.

The Dog House Megaways consists of six reels that can feature two to seven symbols. To earn a payout, you need to line up at least three matching symbols in order from left to right on adjacent reels.

There are 117,649 possible ways to win in this game, and each spin produces different combinations. In the top right-hand corner of the screen, you can check the number of Megaways available in the current spin.

Furthermore, only the highest combination pays out on a single pay way, while multiple wins are added together.

The theme in this slot is all about our favourite furry friends who are living their best lives in the suburbs.

A row of pretty houses with white picket fences and well-watered lawns depicts the background, while a wooden dog house frames the slot’s grid.

On the reels, you can expect the return of some seriously adorable doggos, colourful playing card icons, and other pet paraphernalia.

The premium symbols include a rottweiler, a Shih Tzu, a pug, a dachshund, a collar and a bone. On the other hand, a set of rainbow coloured playing cards in the form of 10, J, Q, K and A act as the lower-paying symbols.

Additionally, a kennel represents the wild symbol, while a dog paw acts as the scatter symbol.

If you land six symbols of the rottweiler, you’ll receive 7,5x your bet, while the J and 10 playing card symbols payout 0,5x for six of a kind.

Like many other Pragmatic Play slots, you can wager a minimum of £0.20 per spin, while the maximum is £100. Additionally, you can customise your bet by choosing from one to ten bet levels and various coin values.

The useful autoplay setting is at your disposal as well, allowing you to run up to 100 automatic spins.

Furthermore, you can choose to stop autoplay if your cash decreases or increases by a specific amount, or if your win exceeds a certain amount.

There are quick spin and turbo spin settings available as well.

This is a highly volatile slot, which means it pays out less on average but has a higher chance of triggering massive wins in no time.

Additionally, The Dog House Megaways RTP is 96.55%, while its hit frequency information will only be available once it’s been out for a few months.

This slot offers a maximum payout of 12,305x your bet. You can achieve this win in the free spins feature that incorporates multipliers, sticky wilds, and raining wilds.

Regardless of whether you stake the minimum or the maximum, the payout value remains worth 12,305x.

Naturally, the higher your wager, the more you’ll win, so try to bet at the optimal level that your bankroll allows.

This slot allows you to trigger the following exciting features which include:

Wilds and other features

The kennel, or dog house, represents the wild symbol, which can replace any regular symbols to produce a winning combination.

Since the scatter is a special symbol, it can’t be substituted by the wild. Furthermore, the wild can only land on reels two, three, four and five.

Whenever a wild symbol appears on the reels, it can have a random multiplier of 2x or 3x attached to it.

Additionally, if more than one wild in a winning combination features a multiplier, all the multipliers are added together.

The paw scatter symbol can land on all reels. If you hit three or more of these icons, you’ll enter the free spins feature that consists of two different rounds: sticky wilds and raining wilds.

You can only play one of these options, so choose the one that appeals most to you.

Here, you receive a specific number of free spins, according to how many scatter symbols you triggered:

During this round, all wild symbols can award random multipliers of up to 3x, and remain on the reels until the end.

Additionally, the wilds change size in subsequent spins to accommodate the reels. However, each reel is guaranteed to be the size of the number of sticky wilds it currently holds.

In this round, you also receive a reward that corresponds to the number of triggering scatters:

In this feature, every spin can add up to six wild symbols that carry a random multiplier between 1x and 3x.

The Dog House Megaways is a canine lover’s paradise, and very similar to the original release in terms of its look. It’s full of innocent-looking puppies, colourful and bright visuals, as well as cute animations.

The soundtrack consists of a merry tune that you could whistle while walking your dog and even includes a little yap now and then.

All in all, Pragmatic Play has done an excellent job of creating an entertaining game with eye-catching graphics that suit the theme perfectly.

Other slots to play if you like The Dog House Megaways

Here are some other slots that might appeal to you if you’re a doggie enthusiast:

If you like sequels but detest the massive changes that usually accompany them, The Dog House Megaways will be right up your alley.

It incorporates similar visual effects along with familiar gameplay, adding and removing a few features along the way.

The most significant change comes in the form of its six reels and Megaways setup, along with one bonus feature, the free spins game, which offers a top payout of 12,305x your stake.