Return of the Dead 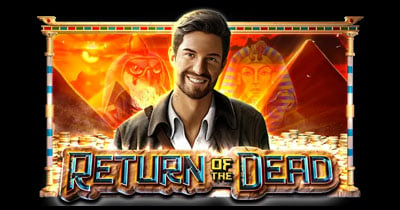 Play Return of the Dead here

Name
Return of the Dead
Provider

Return of the Dead review

Return of the Dead is an Egyptian-themed slot developed by Reel Kingdom and powered by leading slot developer Pragmatic Play. It has 96.7% RTP and high volatility and is available on most UK online casinos. Exciting features include wilds and free spins, coupled with stunning audiovisual effects.

You can learn all about this new slot game in our Return of the Dead Review below.

Return of the Dead Game Overview

Play Return of the Dead Slot from the UK!

Return of the Dead will be released on the 22nd of October 2020 across online casinos in the UK that have partnered up with Pragmatic Play. You can play the demo game for free, or stake real money for a chance to reap huge rewards! If you’re looking for a good casino welcome bonus to boost your bankroll, we’ve listed some casinos where you can play Return of Dead with a bonus below:

Return of the Dead Symbols And Payouts

Return of the Dead has the standard five reels by three rows, so no surprises there. There are ten fixed paylines in total. Winning combinations run from left to right, starting at the first reel.

The regular card images make an appearance, each one stylised with a small Egyptian icon. The book symbol acts as both the wild and scatter. The symbols with the highest values are the scarab, Ra, a golden Pharaoh tomb and a Riche Wild doppelgänger.

But it’s the tomb-raider-like figure of the explorer who pays out the most, with x500 for five matches.

Below is the Return of the Dead paytable showing the wins in store at a wager of £2 per spin.

Return of the Dead min/max bets

Both beginners and high rollers will be looking for where to play Return of the Dead in UK online casinos. You can bet between £0.10 and £250.

The Return of the Dead RTP is 96.71% and volatility is high. You’ll have long dry spells between wins, resulting in massive payouts when you hit winning matches. The hit frequency for the bonus round is low, so don’t start spinning the reels with visions of regular free spins.

Return of the Dead Maximum Win

The maximum win in Return of the Dead is set at an alluring x20,000. With a low number of 10 paylines and its high volatility, this feat will be challenging to achieve. Your best chance is landing the free spins and receiving as many expanding scatters and wilds as possible.

Return of the Dead Features

Return of the Dead doesn’t come with too many base game and bonus features. There’s only the standard wild, while you won’t find sticky or stacking abilities. You can win free spins in the bonus round, and you might score some expanding scatters.

Below is a summary of all the features.

Wilds and Other Base Game Features

There’s a single wild that only provides the standard function of replacing any other symbol. No respins are available, and you also won’t find any additional base game features. Sadly, it just feels like just another Egyptian-themed slot in different wrappings.

The book icon features as the wild and scatter in Return of the Dead, depending on how many you receive. The wild can transform into other symbols, which sometimes gives the appearance of them stacking. However, there are no stacked or walking wilds.

Return of the Dead Free Spins

With the book symbol doubling as the scatter, you’ll need to receive three of them to start the free spins round. You’ll start with 10 bonus spins, which can be retriggered indefinitely.

Before the round starts, the game selects a random symbol to expand vertically. This symbol will cover the entire reel following a win, and will pay out even for non-adjacent positions!

The background theme features the famous pyramids of Giza. The design and animations are superb, and you’ll enjoy watching the characters appear on your screen. While we’ve seen way too many Egyptian slots already, there’s no denying that the graphics in Return of the Dead are beautiful to behold.

You can also enjoy the sounds of Arabic instrumental music while spinning in the base game. The tunes are slow until you win, which is when the fanfare breaks out to set your heart beating at an exhilarating pace. Overall, the bright colours, lively animation and sound make the casino game a pleasant slot to play.

Numerous titles have been released with similar features and theme as Return of the Dead. Let’s take a quick look at some of them.

It’s quite obvious that by choosing this title, Pragmatic Play wanted to create some sort of association with Play N Go’s popular Book of Dead slot, and the latter’s own ‘twin’, Book of Ra Deluxe by Novomatic. The more recent Legacy of Dead slot by Play N Go is also a good choice!

You can also try Yggdrasil Gaming’s Valley of the Gods 2. It has a unique 6-reel format of 1-2-3-4-5-2, and you can destroy scarab blockers to gain extra lives. The slot’s attributes include 96.3% RTP, medium-high volatility and a 20% hit frequency.

Return of the Dead Review – Conclusion

While we’re fans of ancient Egypt, the number of online slots that evoke theme is saturating the market with too many titles. It would’ve been a different story if we found any exciting features for our Return of the Dead Review. We’re satisfied with the RTP and volatility, but having just 10 paylines is disappointing, and the only special feature can only be triggered during the free spins round. Moreover, it would have helped if there was a higher hit frequency.

We recommended you play a free demo of the game before wagering real money on Return of the Dead slot.