Nostradamus Prophecy slot is based on the famous 16th century Frenchman who left a lot of predictions, becoming probably the most famous clairvoyant ever. 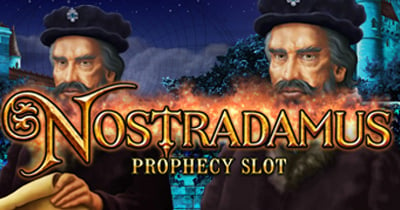 If you’ve never played any slots by Playtech, we highly recommend trying out the Nostradamus Prophecy game. It is based on the famous 16th century Frenchman who left a lot of predictions, becoming probably the most famous clairvoyant ever.

Some of his prophecies came true, which significantly improved his reputation.

But either you believe in all this or not, we can tell you with 100% certainty that the slot is very enjoyable with loads of bonus feature and an amazing design

The slot is set on 5 reels and has 243 paylines to benefit from.

There are loads of different symbols apart from the basic card value ones including telescopes, scrolls, hourglass, quill and parchment as well as the images of Nostradamus himself of course.

The Wild symbol is a crescent moon, and there are also two scatter symbols – the planet and the prophecy book.

The game includes so many special features, that it’s hard to count them. But we will try of course!

This feature runs through the base game and offers you three different modifiers based on natural disasters.

Trigger the Planet bonus feature by landing the Planet scatter symbols on the first, third and fifth reels at the same time.

You will be taken to a separate screen where the planets orbit around the sun with prizes attached to each one of the 6 of them. Once the planets stop at the winning line, you will see what kind of multiplier prize you have won.

This bonus is only available to those who play at the stakes not lower than £5.00 per spin.

This is a simple but handy feature that awards you with extra cash prizes each time you get a win with the prophecy book symbol in it.

The Globe scatter is responsible for giving you some free spins. Land at least three Globes anywhere on the reels to activate this feature.

Depending on the number of globes you score, you get a different amount of free spins and a different modifier.

You can find the Nostradamus Prophecy slot in one of the biggest and most trustworthy UK online casinos that have been on the market for ages and are ready to offer casinohawks.com readers some exclusive welcome bonuses.

Check the links above to see how much cash and free spins you can get when first depositing.

You can play Nostradamus Prophecy slot from a minimum bet of 25p up to a maximum bet of £50 per spin.

This medium volatility slot includes a non-progressive jackpot with the Nostradamus and crescent moon wild symbols awarding you with 500 times your line bet when you get five of them on one payline.

The graphics and design is where this slot really starts to shine. The 16th Century ambience is created thanks to the medieval European castle background and dramatic classical music that changes during different features.

There are loads of special effects used in the game like Egyptian pyramids exploding and the Lightning striking the Eiffel Tower or Tsunami washing over the reels during the Nostradamus Predictions feature or opening prophecy books and rotating planets in other features. Impressive job, Playtech!

While Nostradamus Prophecy slot will certainly not predict or change your bright future, it can most definitely give you some enjoyable minutes (or hours) with an impressive number of bonus features special effects and very cool design solutions.

The game is quite different from everything else we’ve tried recently, so it’s worth giving a spin even to just expand your casino horizon.