Nitro Circus is an online slot from Yggdrasil. Read our review below to learn about this game's nitro jump feature, free spins, and more. 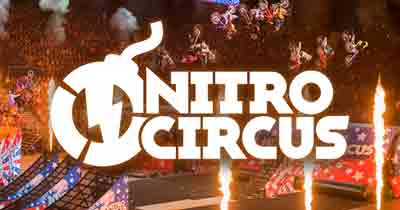 Here’s some great news for those adrenaline junkies out there: Yggdrasil Gaming is about to release its first branded game this week! The developer has partnered up with the action sports entertainment brand Nitro Circus to create an action-packed slot inspired by these legendary stunt shows! Featuring a number of bonus features, including an exhilarating Nitro Jump feature which will lead to cash prizes and mulitpliers, Nitro Circus slot sounds incredibly exciting! Read our review of this game to learn more about its features and to find out at which online casinos you can play it as from the 15th of November 2018. 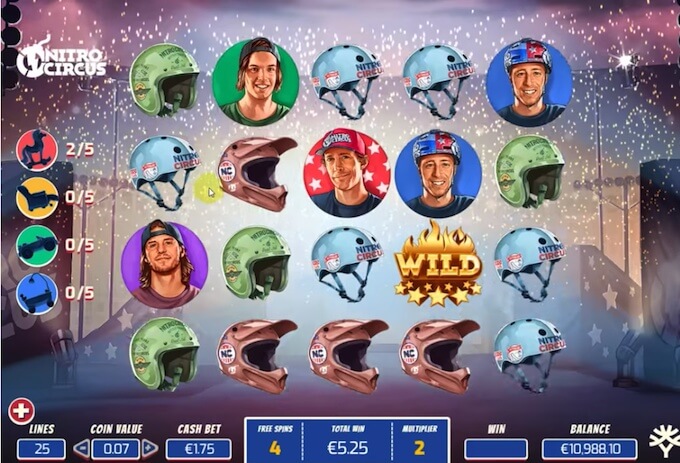 Nitro Circus is a 5-reel slot with 4 rows and 25 paylines. Symbols on the reels include 3 different motorcycle helmets and 4 higher-value riders, as well as N, I, T, R and O letters (more on the latter below). There’s also a wild symbol which replaces all regular symbols, and a Nitro Bomb scatter symbol. If you land on 2 of these Nitro Bombs during the base game, you will trigger the game’s Nitro-Blast Minigame feature. Players will get to choose 1 of 5 bombs in order to benefit from one of the following prizes:

If you land on 3 or more Nitro Bomb symbols during the base game, this is when you’ll trigger the free spins round which will be enhanced with 1 or more of the features that you also get in the minigame, i.e. extra free spins, extra wilds and vehicles and multipliers. You’ll get the following combinations according to how many of these symbols you get: 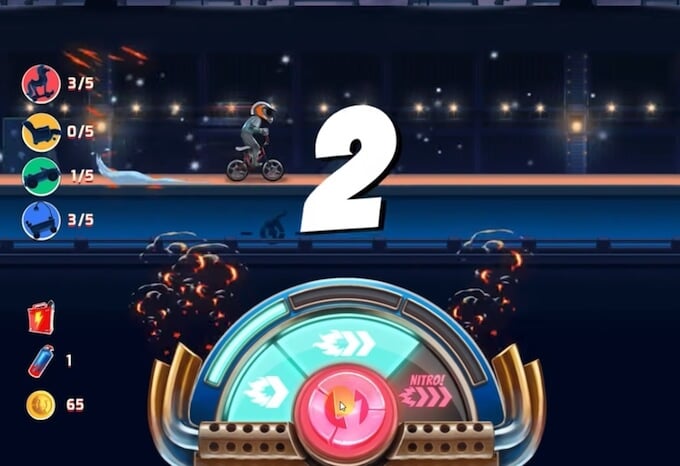 Nitro Circus also features so-called vehicle collections, which will be highly sought-after, as collecting 5 identical ones will trigger the game’s Nitro Jump feature. Each triggering vehicle has its own perks, which will be a combination of tricks, size and boost as follows:

Another way of triggering this Nitro Jump feature is if you manage to line up the NITRO letters across the reels in 1 spin. You will then be able to choose from the below vehicles:

Once you trigger this feature, you will get 3 stunt jumps and 1 final Boost Jump and the reels will be replaced by a cartoonish rendering of an athlete performing the tricks. The stunt jumps are given a score by the judges, of between 0.5 and 62.5 times your stake, and the score is determined by the tricks performed. Players can collect up to 6 prizes during the stunt jumps, which include prizes amounting to 2.5x the stake, speed boosts or a multiplier for the final jump, or 10 free spins. During the final Nitro Boost, you also have the option of adding a manual speed boost to get a better multiplier, however this also increases the chance of crashing and losing all the multipliers!

If Nitro Circus slot sounds a bit complicated to you, then you might prefer to play it with a casino bonus first. You can claim one by signing up with a new online casino that offers a welcome package consisting of some bonus funds. Check out the casinos below, which all offer games by Yggdrasil and also offer such a bonus, and make sure to visit our offers section in the next weeks, as we expect some casinos to run special offers on this innovative slot as well!

Where to play Nitro Circus slot

You can play Nitro Circus slot by staking as little as 10p and up to £125 on each spin. The game has an RTP of 96.2% and volatility is medium. The biggest wins are to be had from the Nitro Free Spins combined with a multiplier – you can win up to 2,000x the stake if you’re lucky during this round!

Set against the familiar stunt area and featuring images of Nitro Circus’ most famous athletes, including Travis Pastrana, Nitro Circus was nicely designed to appeal to fans of this show. Expect some nice visual effects and cut scenes with snippets from this amazing show, accompanied by a guitar soundtrack that’s so typical of motorsports these days. 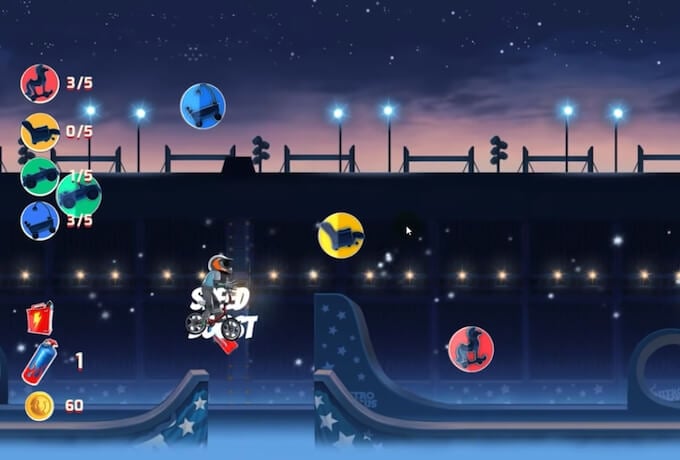 Nitro Circus slot is an ambitious release in which Yggdrasil attempts to diversify its offering to satisfy that category of players who are looking for more variety and action in slots. This developer’s fabulous take on the Nitro Circus show is certainly admirable, though we would have liked a bigger win potential given its complex set of features. Nevertheless, Nitro Circus slot can be a lot of fun, and we do recommend trying it out at a reliable online casino if you’re looking for something different. You should also check out two other current releases by Yggdrasil, both of which also include a great mix of bonus features: the vodoo-themed Baron Samedi slot and the haunting Dark Vortex slot, which has already been released and which offers payouts of up 7,318x the stake.