Hit It Big is an online slot from ELK Studios. Learn about this game's stacked wilds, respins feature, and more in our review below.

Elk Studios presents “your favourite retro game show”, one of the best new online slots that will be released April which will immediately strike you with its neon colours and distinctive style! If you’re bored of the usual 5-reel/20 payline slot, then keep reading our review of Hit It Big slot to learn all about its great combination of features, bonus game and multipliers of up to 1,000x!

Hit It Big is a 5×3 retro slot with just 5 paylines. Symbols on the reels include the classic bars (which come in green, blue (double) and red (triple), green, blue and red 7s and the Hit It Big logo, which is the bonus symbol. There’s also a golden treble 7, which is the most lucrative symbol that pays out 50 times the stake for 5 in a payline. Finally, there’s a crown wild can replace all of the symbols except the bonus symbol to help you form winning combinations. 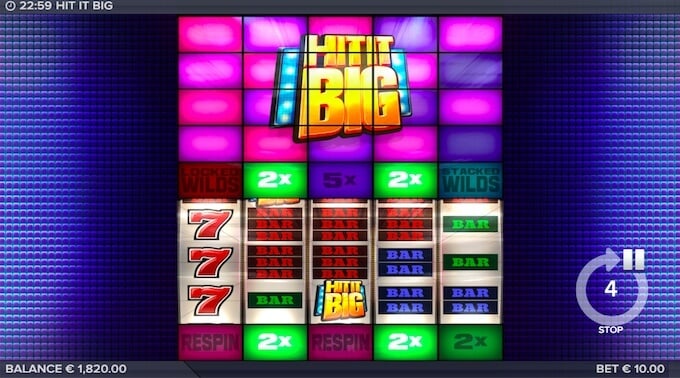 Above and below the reel set in Hit It Big slot, you’ll see a number of feature buttons that display different features (as you can see from the above screenshot). Each time a player spins the reels, these feature buttons will also change, and if the bottom feature matches with the top one above it, that particular feature will be triggered. In this way, you can trigger any of the below as you play Hit It Big:

Win multiplier (2x – 50x) – if the features match and the player lands on a winning combination, this feature will come into effect.

Respin – the feature buttons will also respin together with the reels.

Locked Wilds – the leftmost and rightmost reels will lock on the stacked wild position for the duration of 3 spins!

The bonus game in Hit It Big involves a 5×5 reel set with 3 levels: the outer circle, the inner circle and the Hit it Big screen. A marker will randomly jump around on different multipliers until the player hits the stop button (starting from the outer circle). When the marker stops, the selected stake multiplier is awarded, and is then replaced by the figure of a bandit. The aim of the game is not to hit the same position twice, since the second time round the player will bump into the bandit, which causes the bonus game to come to an end (leaving you with any winnings you’ve already collected). 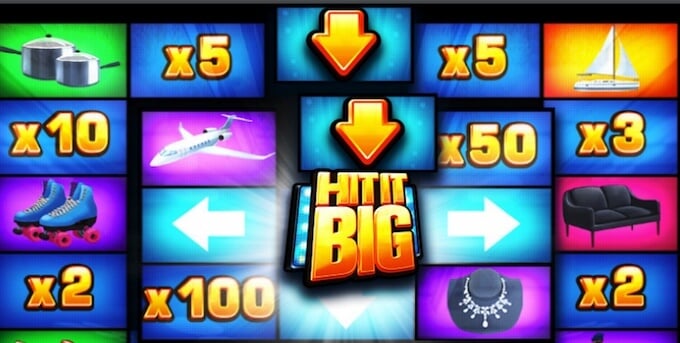 During the bonus game, players can level up by hitting inward pointing arrows on the outer and inner circles. This moves the selection marker towards the center position, whereas if you hit an outwards pointing arrow, the marker will bounce back to the outer circle. If you manage to hit the inwards pointing arrow in the inner circle, then you’ll get into the final HIT IT BIG bonus level. This is where you can benefit from the game’s biggest rewards, thanks to a set of much higher multipliers (up to 1000x!). Players will only get one chance to truly Hit it Big here!

If you’re not quite sure whether Hit It Big is right for you yet, remember that you can either try the game for free or with some bonus funds first. The best way to get a decent amount of bonus money is by depositing with a new online casino that offers a deposit match bonus to UK customers. Check out the ones we recommend below, where you’ll also be able to play Hit It Big slot as from the 9th of April 2019.

Where to play Hit It Big slot

This Elk Studio game is playable for real money by staking from 20p to £100  on each spin, which makes it suitable for low and high rollers alike. RTP is set at 96% and volatility is very high, with a slot hit rate of just 16.3% overall! If you manage ‘hit it big’, you can expect payouts of up to 2,500x your stake.

Hit It Big graphics and sound

Hit It Big features flashy retro graphics and sound effects that give the slot that game show feel. Once again, Elk Studios have done an incredible job with both graphics and sound, to offer us a top-notch title that’s pleasing to the senses. 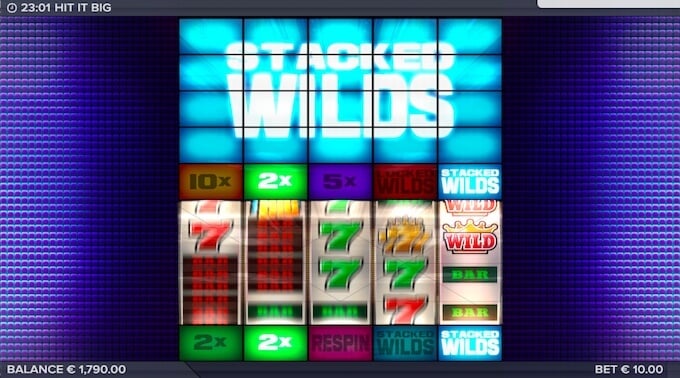 Hit It Big slot – our Conclusion

We liked Hit It Big for its originality and the nice mix of features involved – its retro and slot machine elements will appeal to a wide player base, and the bonus game is incredibly alluring, though its inner circles are hard to reach. As always, graphics are of the highest standard, and it’s nice to see how Elk Studios have reworked the traditional slot machine elements into a more modern and rewarding game. Try it out at your favourite online casino, and best of luck!