NexGen’s favourite lucky Foxin is back, and this time we are going around in the high seas on Foxin’s fancy yacht. 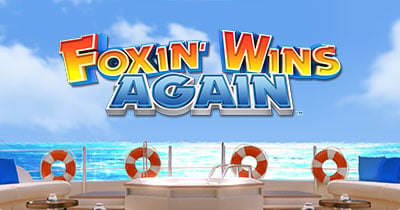 NexGen’s favourite lucky fox – Foxin is back, and this time he’s not taking us around his luxurious house like he did in the original Foxin Wins slot.

In the second edition we are going to the high seas on Foxin’s fancy yacht, so the whole game takes more of a marine, nautical theme.

There are free spins, second chance feature and sweet, funny fox pups that are jumping on the reels turning regular symbols into wilds.

Learn more about the game, its winning possibilities and which online UK casino will let you play it right now by reading the full review below.

Foxin Wins Again slot is set on 5 reels, 4 rows and 50 paylines with the cute symbols of cocktails, super-yachts, compasses as well as Foxin himself and Mrs Foxin chilling on the sun lounge.

The light-hearted images are nicely put together and include cocktails, compasses and cruise ships as well as playing card symbols.

There are also the lower-paying standard card symbols of  9, 10, J, Q, K and A. Foxin at the yacht wheel is the wild symbol, which substitutes the other symbols apart from the scatter one.

It also awards 5,000 coins if you get five wilds on a payline. The wilds can appear as stacked and fill an entire reel to greatly boost your winning chances.

One of the coolest, fun and lucrative features of the game is the cute little fox pups jumping up and down and transforming normal symbols into wilds. But as a baseline, you only get pups on the third reel.

If you want more of them, you’ll have chose the Super Bet option, which costs extra.

To have pups on the three middle reels will cost 75 coins, whereas pups on all five reels will set you back 100 coins.

The scatter symbol is a bell – three of them will be responsible for triggering the free spins round in Foxin Wins Again slot.

Initially, you receive 10 free spins but you can re-trigger more of them if more scatters land during the bonus round.

What’s amazing about this feature is that fox pups appear here even more often than in the base game so you get more wilds and more chances to win.

But if for whatever reason you’re not satisfied with your free spins winnings, you can opt for the Second Chance option.

This gamble feature allows you to try and double or quadruple the winnings amount by correctly guessing the colour/suit of the card.

You can try out the fun and lucrative Foxin Wins Again slot at one of the most generous and reliable UK online casinos listed in this article and get a great casino welcome bonus of more than a £1,000 and hundreds of free spins as well.

You can play medium to high volatility Foxin Wins Again slot starting from a minimum bet of 50p and up to the maximum bet of £100 per spin.

We highly recommend upping you bet level to get more foxy pups and more wilds.

The RTP rate here is not that high 95.87% but overall we found this slot to be quite lucrative nonetheless.

We have no doubts that anyone can have a lot of fun playing this sweet, action-packed game and you can also win a maximum possible non-progressive jackpot of x5,000 or 200,000 coins.

Anyone who has ever played the original Foxin Wins slot will truly appreciate the sequel too.

The sly aristocratic fox is here to impress us with elaborate but light-hearted graphics and funky joyful soundtrack. One of the most unusual design elements here are without any doubt the jumping pups.

Not only they add a lot of fun, but also make you very happy for getting so many wilds on the reels.

Join the Foxin on his blue sea voyage, and maybe soon you’ll swim in luxury just like the Foxin does thanks to the maximum win of 200,000 coins.

It is a very enjoyable slot indeed, and the winnings come quite often especially if you opt for the Super Bet and trigger the free spins round.

We highly recommend trying Foxin Wins Again game at one of our favourite online casinos mentioned above.