The classic European children’s story gets a new life in this highly animated 3D slot game with a huge number of bonus features. 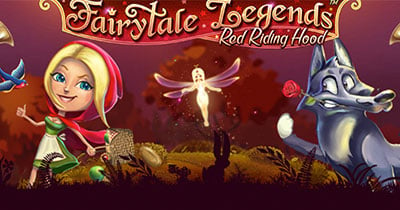 Let us walk you through the game along with the little red hooded girl to see what kind of winning possibilities she might bring you.

The lower paying symbols are card values as usual and the other medium paying symbols including a game logo, a royal crest, gem-encrusted key, a pink rose and a fairy tale book.

That’s not counting the special symbols which are used in an unbelievable 7 (!) special bonus features.

Wild symbol – which is a portrait of the main girl with the wild on it – appears on the second, third and fourth reels.

If 2 of them pop up at the same time, they become sticky and award the player with a Sticky Wild Re-Spin.

If during the Sticky re-spin another wild symbol lands on the reels then one extra Sticky Wild Re-Spin will be awarded.

There are also 3 random features that can be triggered at any time during the base game apart from the Sticky Wild Re-Spin duration.

Fairy Magic Spin Feature adds an overlay cluster of any medium value symbol over the reels – when you get it, anywhere from five to nine symbols will pop over the reels for one single spin.

The Fairy Surprise Feature is triggered randomly after a no-win combination during the base game. To cheer you up the magical fairy will show up and highlight a random low-value symbol for the next few spins until the more symbols match up, and the win is awarded to the player.

The Fairy Wild Spin will give you a cluster of 3 or 4 wilds on the three middle reels until the wins are paid out, after which you receive a Sticky Wild Re-Spin as well with the ability to trigger an additional one if more sticky wilds appear on the reels.

Coin Win bonus is a small but sweet random feature – one of the 3 bonus features in total in this game that are awarded when you get 3 bonus symbols on the reels and need to choose one of the three treasure chests to activate your bonus.

If your choice falls onto the Coin Win you’ll be rewarded with a cash prize x15 your current bet.

This is one of the most visually interesting features that takes you to a separate screen where Red Riding Hood is running around the forest paths that look similar to a typical board game.

You start at the position zero and move around the multipliers ranging from x1 to x20. There are five different types of locations/movements.

Free Spins Round is one of the three bonus games that are hiding inside the Treasure chests. It awards you with 10 Free Spins. During the feature, you can easily score more Free Spins by getting the Bonus Free Spin symbol on the first, third and fifth reels.

In addition to that during the Free Spins, you can encounter two or more Wild symbols that can appear on any reels and reward you with one Sticky Wild Re-Spin.

As it always is with the NetEnt game releases, there is no shortage of amazing, generous and professional online casinos that start offering the slots immediately after the release.

So from the 24th October 2016, you can enjoy this little gem of a slot by clicking on any of the casino links we’ve collected for you above.

By playing it at our carefully chosen casinos, you will not only get the awesome gaming experience but also receive the most generous casino welcome bonuses up to £1,500 and more than 400 free spins depending on your first deposit amount.

The game has an extremely wide betting range starting from a minimum bet of 20p and up to the maximum bet of £200. The total average return to player is set to 96.33% with the hit frequency of 19.9%.

The maximum amount you can win in Red Riding Hood slot is 4,000 coins on a single bet line and 80,000 coins as a coinciding win.

Some people might say that the game is too childish and cartoonish, but hey, it’s a fairytale adaptation after all. Yes, it is cutesy and girly beyond believe, but the graphics and animations are super-impressive anyway.

All that magical fairy dust and the Red Riding Hood running around the woods add a lot of visual excitement to the game, and every one of the features has its own animation, which is very well-done.

It’s hard not to like a game of this calibre. Just tell us how often you encounter the games with 7 bonus features? Last time we saw one, it was NetEnt’s Theme Park, which quickly became one of our favourites.

The game is released in 2 versions straight away for the desktop and mobile – the FairyTale Legends: Red Riding Hood Touch version.

We truly admire NetEnt for such an incredible variety of the latest games releases – Red Riding Hood can’t be more different than let’s say the previous slot launch Motorhead.

But we like them both and have a feeling that many players will love it too.