We are expecting a lot from this slot, so let’s see if the game lives up to the high expectations and which online casinos are going to offer it first while also giving you a generous casino welcome bonus. 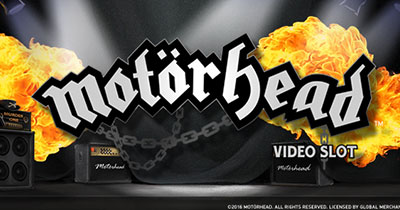 If you’ve already tried the two of the NetEnt Rocks games Guns N’Roses and Jimi Hendrix, you’ll be happy to hear that the third installment – the Motörhead slot is about to be released for the joy of all rock music fans and casino lovers.

The symbols include the images of the recently departed lead singer Lemmy as well as some more typical slot symbols like stars, bells, four-leafed clovers, sevens and horseshoes.

All of them are done in a typical rock band t-shirt style with suitable dark, subdued tones.

The wild symbol is the Ace of Spades logo. ‘Ace of Spades’ was one of the most famous albums and songs by the band released in 1980 with lyrics that any gambler can easily relate to “If you like to gamble, I tell you I’m your man, You win some, lose some”…

Watch out for the scatter symbol – Motörhead ‘war pig’ band logo. Landing a scatter on any of the three right-hand reels will award you with 10 free spins.

One of the three bonus features of the slot is the Mystery Reel feature. During every single spin of the game, one or more reels will become Mystery Reels that include stacked mystery symbols.

After the reels stop spinning, the mystery symbols will reveal themselves turning into the random stacked symbols, which can bring you some nicely sized winnings.

Another special feature is the randomly triggered Bomber. Before each spin, the Bomber might start – you will see a few bombs appearing on the reels, each one creating at least 10 overlay mystery symbols.

The maximum number of bombs is 5 with the 15 possible overlay mystery symbols.

The mystery symbols get uncovered after the reels stop spinning similarly to the Mystery Reel feature.

A minimum of three war pig scatter symbols on the third, fourth and fifth reels will activate the free spins bonus game.

You receive 10 free spins and at the same time benefit from both Mystery symbols and Wild symbols for some substantial wins.

Unfortunately, being one of the most attractive features if the game, free spins cannot be retriggered during the bonus round.

We’ve noticed that you have the highest chance of scoring seriously big payouts during the free spins round.

Where to play Motörhead slot and get a casino bonus

As with most NetEnt slots, you just wait and see – loads of amazing UK online casinos will include this game in their portfolio as soon as it’s released.

This slot is a big deal, so we are expecting a wide choice of operators offering it from day one. If you are willing to give this rock slot a good old spin, click on one of the links below.

Here we’ve collected the best casino operators that offer the biggest welcome bonuses and the highest numbers of free spins for the new depositors and some generous ongoing campaigns for the loyal players.

Motörhead slot impressed us not only with its great design, unbeatable soundtrack and great bonus features but also with one of the highest payouts that we’ve seen lately.

The average return to player percentage here is 96.98%. It’s a solid, medium volatility slot that can be played starting with a minimum bet of 20p and up to a maximum bet of £200 per spin.

You can win an amazing 570 your stake, so this game is a definite must-try in our opinion. 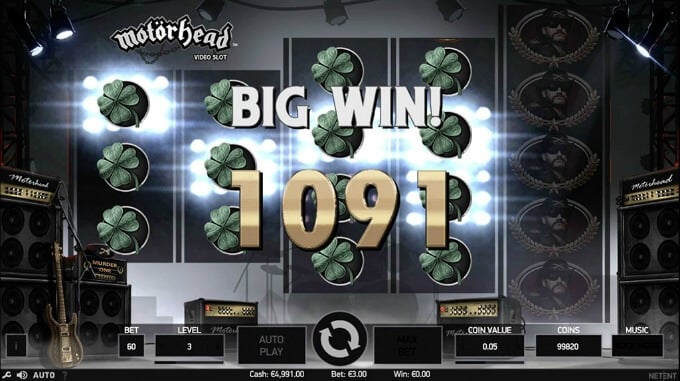 It’s hard to ruin the music-themed slot as there is so much to use regarding the soundtrack, images and special effects.

It’s especially true when it comes to a legendary band such as Motörhead with 40 years in the music industry, 30 millions of albums and millions of fans worldwide.

The game has an intro of the original Motörhead gig, and the slot itself is set on the stage with amplifiers and speakers around the reels.

Any fan can also enjoy the legendary songs like Killed by Death, Ace of Spades, Iron Fist and Overkill.

What’s cool here is that you can switch the rock mode on and off, depending on how much you actually appreciate the Motörhead music.

So even if you’re not that big of a fan, you can still enjoy this slot without too much distraction.

Here at casinohawks.com we consider ourselves the rock fans, so we are being slightly biased when saying that this slot rocks big time.

But even if you couldn’t be bothered with the band, we still think that this game is worth a try.

Sky-high RTP, very lucrative free spins bonus game, 570 times your stake jackpot and cool Mystery features all contribute to putting this game on top of the best releases of 2016.