Ready to have a blast while spinning the reels? Get ready to sway your hips as you play Easter Island by Yggdrasil - full of cool features and a lively sound track! 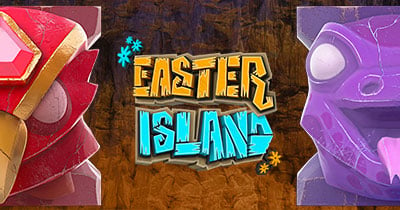 Attention fun-loving slot players: We’ve just had a blast trying out Yggdrasil’s new release and would like to share our review of their upcoming game with you!

Not only is the new Easter Island slot fun and incredibly entertaining, but it can also reward you massively thanks to its re-spin and expanding reels features.

Keep reading to learn more about this thrilling slot and why we loved it so much, and find out where you may try it out yourself once it’s released on the 22nd of March 2018!

Easter Island slot is played out on reels full of colourful symbols guarded by two friendly Moai stones, set on the windswept Chilean island by the same name.

Symbols on the reels include four lower-paying card symbols and five higher-paying animal symbols that pay from left to right, with the red bird being the most lucrative one.

The game also features a wild symbol, which appears only on the second and fourth reels and expands to fill up the entire reel once you land on one of them!

One great thing about Easter Island slot is that every time you land on a winning combination, you will experience a Symbol Swap Respin Feature.

This means that you’ll get a free spin after winning with one of the card symbols, which transforms the other lower-value symbols into the winning symbol for the duration of the re-spin.

If, on the other hand, you’re lucky enough to land a win with a high-value symbol, all the animal symbols shall change into the same animal symbol that triggered the re-spin.

This of course significantly improves your chances of pocketing bigger amounts following the re-spin.

Another interesting characteristic of Easter Island’s re-spin feature is that this spin can be played out on expanded reels if you land on a big winning combination.

Landing on 3 of a kind awards a standard re-spin on the same set of reels, whereas 4 of a kind features a re-spin on 5 rows with 65 paylines.

If you manage to land on a 5-symbol winning combination, you will get a re-spin on 7 rows, with 103 ways to win!

If you’d like to try out Easter Island without risking too much of your own money, then you should claim one of the many online casino bonuses that are offered in different casinos.

A lot of our recommended casinos offer 100% or 200% matches, which means that your first deposit will be doubled or even tripled!

To claim one such bonus, simply click on the links above, register and claim a bonus before starting to play.

Easter Island is a low variance slot with a decent RTP of 96.1% which regularly pays out small wins, perfect to fight off your boredom.

Players can bet as little as 10p up to £200 per spin and lucky winners can expect to win up to 1,880x the stake if you manage to land the highest-paying symbols during the expanding reels feature!

When it comes to Easter Island slot’s graphics and visual effects, it’s hard to find fault with this game.

The animated stones and brightly coloured symbols on the reels make for an extremely entertaining gameplay, and all this is complemented by a lively and light-hearted soundtrack which really immerses you in this action-packed game!

Easter Island is a slot which we definitely recommend to slot players. We found the expanding wilds and the re-spin feature to be extremely rewarding and have been able to increase our balance over a considerable number of rounds.

Payouts are frequent and with a good dose of luck you can secure huge wins, all whilst enjoying stunning visual and sound effects that are truly a work of art!

Try it out for yourself once it’s released on the 22nd of March for a chance to win big, and if you’re bored in the meantime, feel free to try out one of best new slots so far!