The classic upstairs/downstairs British TV show, Downton Abbey, is now available to play as an online slot at your favourite online casinos. Read below to learn of this game's unique features, payouts, and where to find it. 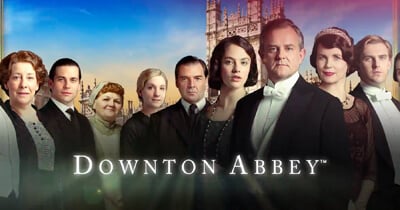 Walk around the Downton Abbey slot machine by Skywind Group and feel like you’re part of the popular TV series. Play over two grids with up to 243 ways to win, 90.00% RTP, and high volatility. Read our full review to see how you could win up to 1,500,000 coins:

How I tested Downton Abbey

I identified the most important criteria when testing the special features of the Downton Abbey online slot:

You’ll find Downton Abbey at any of the following top UK casinos:

I recommend Casino Planet as a great place to get started. It is licensed by the United Kingdom Gambling Authority and offers a healthy selection of games. You’ll kick off with a first deposit bonus of 100% up to £100 + 200 bonus spins when you deposit £10 or more. You’ll receive 20 spins on 10 consecutive days to use on the Book of Dead slot by Play’n GO. You can use your bonus cash on any game – like the Downton Abbey slot machine, for example!

The Downton Abbey slot machine consists of two 5×3 grids placed on top of each other. Each game comes with its unique symbols and paytable as described below:

In both games, the wild is illustrated by the landscape of Downton Abbey. The slot’s special symbols include a bell, the DA logo, and a red rose. The three kinds of scatters include Duty Calls, Reels of Wealth, and Manor on the Move.

How many paylines you play over depends on which game is active:

If you get more than one winning combination on one spin, only the highest win will be paid out. Wins on multiple paylines are added up and paid out as one prize.

You’ll set a coin value between 0.01 and 3.00 to give you a total stake of between £1.00 and £300.00. You can see the latter being adjusted automatically to the left of the coin value meter. The autoplay option doesn’t allow you to choose the number of spins or win and loss limits, which means you’ll have to keep an eye on your balance as the reels turn. To stop the autoplay, click on the three dots above the total bet icon and then hit the pause button.

Downton Abbey has a high volatility.

There are three jackpot prizes that can be won while playing Downton Abbey. The most you can win is 5,000x your bet, which means 1,500,000 coins when staking the maximum.

There are two games on Downton Abbey – one with 40 paylines and another with 243. Each one has its own symbols and paytable, which makes the game more interesting. This and the high volatility makes up for the low RTP. There are also three jackpot prizes available, the highest of which pays 5,000x your stake – not too shabby if I may say so myself.

The wild helps complete or enhance winning combinations by substituting for any symbol on the reels. This excludes the special symbols: bell, red rose foreground, Duty Calls scatter, Reels of Wealth scatter, and the Manor on the Move scatter.

The special bell symbol acts as an additional wild and substitutes for all symbols except the red rose foreground, Duty Calls scatter, Reels of Wealth scatter, and the Manor on the Move scatter. This only appears on reel 3 in Game 1.

The DA Logo appears as a permanently fixed symbol in Game 2. As the Downton Abbey slot’s third wild, this substitutes for any symbol except the red rose foreground, Duty Calls scatter, Reels of Wealth scatter, and the Manor on the Move scatter.

The black circle in Game 1 is the Zone. Dropping a bell in this area will trigger the Downton Abbey slot machine’s Game 2, also known as the Upstairs feature. All wilds present in Game 1 will make their way Upstairs to their corresponding positions.

The Call to Service feature may be triggered when the special bell lands anywhere on reel 3 in Game 1. This puts between 1 and 10 wilds in random positions in the Game 1 window.

You’ll notice that some symbols come with a foreground red rose in the lower-right corner. Collecting five of these during the same spin activates the Downton Village Flower Show. Here, you’ll be presented with 30 pick symbols, each hiding a cash prize, trophy, Duty Calls, Reels of Wealth, or Manor on the Move.

You’ll keep picking until you uncover two matching Duty Calls, Reels of Wealth, or Manor on the Move symbols. Any cash prizes will be paid out and you’ll be taken to the free games round corresponding to the scatter you matched.

The Call to Service feature is guaranteed to trigger each time the bell lands on reel three during this round. You’ll start off in Game 1 with the possibility of triggering Game 2. You can retrigger this Downton Abbey online slot by collecting ten or more scatters.

You’ll get 10 Reels of Wealth free games when matching these in the Downton Village Flower Show feature. Here, reels 1, 2, 4, and/or 5 on Game 1 may become wild to help increase your chances of winning a prize.

You may also see reel 3 transform into stacked bells to trigger Game 2. The Call of Service feature is guaranteed to activate each time a bell lands on reel 3 during this Downton Abbey online slot feature.

The round can be retriggered by collecting 10 or more Reels of Wealth scatters during the free games.

Two matching Manor on the Move symbols during the Downton Village Flower Show feature will award you with 10 free games. Any wild that falls on the Game 1 reels will turn into a roaming sticky wild for the remainder of the round. This is true for the regular wilds – the bell symbol does not become sticky.

The Upstairs and Call to Service features may be triggered during the Manor on the Move Free Games, but are not guaranteed. Wilds that result from a Call to Service will become sticky at the end of the respective feature.

Add another 10 games to this Downtown Abbey slot machine feature by landing ten or more additional Manor on the Move scatters.

Skywind Group has given the Downton Abbey slot machine plenty of features to keep you busy. First, there’s the bell, which triggers the Call of Service and also activates Game 2. You’ve got the Downtown Village Flower Show, which doesn’t only come with a chance to win one of three jackpot prizes, but also awards cash prizes and one of three interactive free games rounds. What more could you ask for?

Meet the characters of the Downton Abbey slot machine

You’ll find familiar faces while playing the Downton Abbey online slot. The characters resemble those of the series and the grids are placed in front of the manor itself. You’ll hear chimes as you spin to the soft catchy tune. Thumbs up from us!

If you like the TV series, then you’ll definitely enjoy the Downton Abbey slot machine. Skywind may have given the game low RTP, but the well-crafted character symbols and the features the game comes with are worth it. This highly volatile game comes with two games – one with 40 paylines and the other with 243. You’ve got your regular wilds, Call to Service feature, and three free spins rounds. Not only that, but you’ll be in with a chance to win one of three jackpot prizes.

See for yourself when you play the Downton Abbey online slot!

Other slots to play if you like the Downton Abbey slot

Other popular TV and movie-themed games you might want to play if you enjoy Downtown Abbey include: