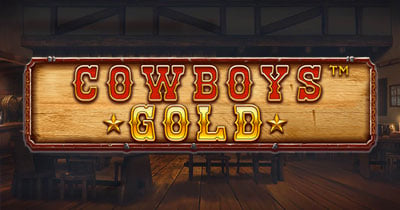 The Wild West has always served as a quality backdrop for video slots, due to its association with risk, action and saloon fun. It’s this genuine feel that Pragmatic Play seeks to create with its upcoming gun-slingin’-themed game.

With an RTP of 96.5% and medium volatility, the game delivers decent rewards and uncomplicated mechanics. In this Cowboys Gold Slot Review, we’ll uncover what other treasures lie within.

Before you test this slot at Pragmatic Play online casinos in the UK, keep reading our review for everything you need to know.

If you’d like to try out this engaging game from the UK, make sure you browse for it in the slots collection of the below casinos as from the 19th November 2020.

You’ll find yourself nestled inside a dimly lit saloon, with wooden barrels and a wagon wheel on either side of the grid. The game features 18 unique symbols, including a wild, a scatter and a few bonus characters.

Furthermore, the gameplay is straightforward, with ten fixed paylines and winning combinations reading from left to right. If the symbols land in your favour, you could walk away with a maximum jackpot of 6,065 times your original bet.

As we mentioned, there are 18 symbols in the game. The four card values, namely the jack, queen, king and ace, represent the lower-paying icons. As for the higher valued symbols, you’ll come across a golden horseshoe, spurs, a revolver and a bottle of whiskey.

Additionally, seven cowboy characters can create lucrative multipliers. The slot also offers a few unique symbols in the form of a sheriff badge wild, skeleton scatters, and a renegade character that only appears on the fifth reel.

Although the game includes a lot of different symbols, getting to grips with its simple gameplay is easier than you’d think. There are 18 paying symbols in total. The most valuable symbol is the golden horseshoe, paying out 75x your initial bet for five of a kind.

Next, is the revolver awarding 50x your bet for five matching icons. There’s also the bottle of whiskey giving you 25x your stake for five symbols in a row. The spurs provide the lowest win of the high valued characters, netting you 20x your initial wager for five of a kind.

The below paytable shows the payouts in store at a standard bet of £2 per spin.

This video slot caters to both high rollers and players with a limited budget. There’s a minimum bet of £0.10. Due to the ten fixed paylines, you’ll need to stake at least 10 coins to cover all lines on a spin. If you’re feeling lucky, you can wager a maximum of £100 on a single turn.

As for the game’s RTP, you’ll find it fixed at 96.5% along with medium volatility. This means that you can expect fairly decent and regular payouts throughout – in fact we were very pleased with the hit frequency in Cowboys Gold!

We found it quite easy to trigger the free spins round, and managed to get one re-trigger which helped us accumulate more winnings.

If there’s one thing missing from this upcoming title, it’s a jackpot. The maximum win is capped at 6,065 times your stake. While Pragmatic Play has offered higher payouts in other games, this seems like an achievable goal, making it that much more attractive for those on a lower budget.

This title has a  brilliant selection of features. Here are a few you might come across:

Wilds, Re-Spins and Other Base Game Features

To render the base game that much more exciting, the developer has included a few special symbols, making it easier to find a winning combination.

One symbol that finds its way into many modern video slots is that of the wild. In Cowboys Gold,, it’s represented by a sheriff’s badge. This icon has the ability to substitute for any of the symbols in the game to form a winning sequence. However, the bonus and renegade characters remain unaffected.

While spinning the reels, you can come across some fantastic multipliers. This mechanic is known as the “Money Collect” feature, and uses the seven cowboy symbols we pointed out earlier.

Whenever an outlaw appears on the reels, there’s a chance it displays a number between 1 and 100 on the symbol’s corner. These values represent a multiplier; however, you can only claim a prize when you also land a renegade icon on the fifth reel.

When you trigger this feature, it adds up all the values on the cowboys and applies the multiplier to your winnings. The best part of this mechanic is that it’s available in both the base game and the free spins round.

The bandit skeleton acts as the scatter in this game, only appearing on the three middle reels. If you manage to land them, you’ll get started with ten free spins. Not only do you have the chance of winning cash without risking any of your own, but there’s also the possibility of re-triggers if you land on another 3 bonus symbols or any number of bonus symbols plus the Renegade character.

In this case, you’ll get an additional five free spins every time you activate the re-spins, potentially giving you an extra 25 rounds on top of the ten initially rewarded.

When it comes to graphics, this Pragmatic Play title leaves nothing to the imagination. The reels sit on a wooden frame, along with a horseshoe dangling from a nail. In the background, you’ll notice a few candles revealing a musky saloon setting. You’ll even see a few rats scurrying about in the shadows.

The scenes intensify when you trigger the bonus round, moving out of the saloon and into the street. Here, you’ll get the sense that you’re preparing for a duel, which creates a stimulating atmosphere. As for the soundtrack, the developer went for a more casino-orientated feel, with ringing bells notifying you of a win.

Other Slots to play if you like Cowboys Gold

If you’re looking for a few gunslinging alternatives, why not take a look at these other cowboy-themed slots:

Pragmatic Play has opted to use some of its more dependable features in its latest video slot, instead of bringing something new to the table. While the free spins rounds and Money Collect mechanic make for exciting gameplay, we were hoping for something to set this title apart from the rest.

With that being said, the cowboy-themed slot does offer some brilliant winning possibilities, whereas its well-thought-out graphics and animations bring the game to life exceptionally well. Furthermore, the soundtrack ties in nicely with the theme and the audience clapping when you get a big win is a fantastic touch too.

Although there’s no jackpot available, the attractive maximum win of 6,065 times your initial bet seems a lot more attainable than the maximum payout potential advertised for other titles. Plus, the wide range of betting options means that anyone can find some value in this game, no matter the size of their budget.