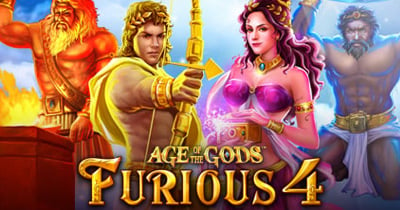 Age of the Gods: Furious 4 is a part of the Playtech jackpot slot series that the company is pushing forward at full speed.

This particular instalment of the series is based on the four Greek mythological heroes or demi-gods, who all have their own stories and, in this case, their own lucrative free spins features as well.

In fact, free spins are the biggest highlight of this game as well as, of course, the 4 progressive jackpots.

Let’s check the gameplay in details and see how much you can win here, by playing the slot at one of the best UK online casinos.

The symbols apart from the lower-paying card values 9,10, J, Q, K and A are Atlas, who has to hold the Earth on his shoulder for an eternity, Pandora, who opened the box to release all the evils into the world.

There is also Hephaestus, the god of fire and crafts as well as Apollo, the god of beauty, arts and light.

You will also see the 2 special symbols.

The big golden 4 wild symbol, which is the highest paying symbols in the game that not only substitutes the other symbols but can also award you with a cash prize of x10,000 your line bet if you manage to land five of them on an active payline. Last but not least, there is a Golden Throne scatter that awards free spins.

When you land three or more Golden Throne scatters anywhere on the reels, you will trigger the Free Games round which comes with 12 free spins and 4 different modes, each one for one of the characters.

Depending on which of the Greek heroes covers the whole middle reel, the respective feature will be triggered.

When Atlas shows up on the whole third reel, you will receive 3 Endurance free spins, while our hero himself freezes on the reels as an extra wild to help you form some decent winning combos.

Get Apollo on the middle reel to receive 4 Age of Light free spins with Apollo acting as an expanded wild and substituting the other symbols apart from the wild and the scatter.

When Hephaestus covers the third reel, it will activate the four Age of the Fire free spins. Reel one will be completely covered by Hephaestus locked symbols, and you will also find some extra Hephaestus wild symbols on the other reels.

When Pandora lands on the whole middle reel, you will receive a cash prize of x1 you stake as well as four Age of Curiosity free spins with an extra x1 multiplier that keeps increasing with every free spin. 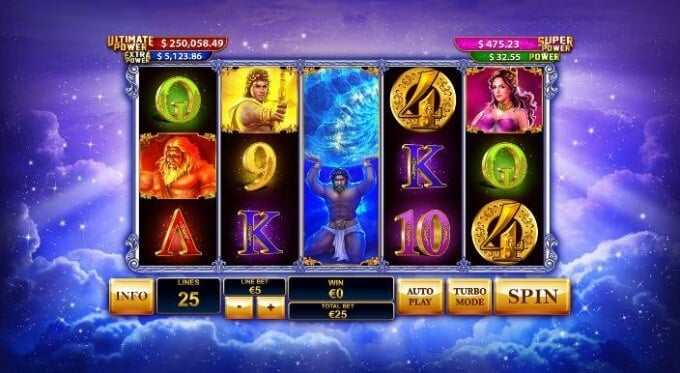 Where to play Age of the Gods: Furious 4 slot and get a casino bonus

Try out Furious 4 slot as well as the other slots from the Age of the Gods series by Playtech at the most respected and generous UK online casinos. You can also take advantage of the juiciest exclusive welcome bonuses up to £1,500 following the links posted below.

You can play the Age of the Gods: Furious 4 slot starting from a minimum bet of 20p and up to a maximum bet of £500 per spin. This medium to high volatility slot has an RTP of 93.88%, which can grow to 94.88% if the progressive jackpots come into play.

There is a standard non-progressive jackpot of 250,000 coins to be won in this game, which in itself is quite impressive indeed. In addition to that you, of course, have a chance of triggering one of the four progressive jackpots. Pick up here coins on an extra jackpot game randomly activated screen to see which jackpot – Power, Extra Power, Super Power or Ultimate Power – is yours.

Age of the Gods: Furious 4 slot graphics and sounds

As with other Age of the Gods slots there are a lot of finely drawn Greek mythological characters, colourful background, lots of gold and blue sky and dramatic music to create the very epic atmosphere suitable for the theme.

The graphics’ quality is superb, and especially if you are into the Greek mythology, you will enjoy the slot a lot, we promise you.

Age of the Gods: Furious 4 slot – our conclusion

Not sure if you’ve heard about it or not, but Playtech is going to scrape their super popular Marvel Progressive Jackpot slot series because of the Disney position on the association of their franchise with gambling.

To replace the Marvel slots, the developer came up with the new impressive Age of the Gods series and so far we are quite happy with the results.