Play'N Go Game developer just launched the new slot game Viking Runecraft based on the Nordic Mythology, which is a very popular theme in the last few years! 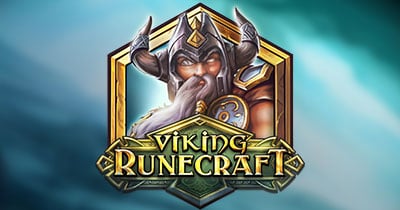 Play’N Go Game developer just launched the new slot game Viking Runecraft based on the Nordic Mythology, which is a very popular theme in the last few years with the slots such as Hall of Gods, Thor and Vikings Go Wild being extremely loved by the casino players worldwide and performing very well. Viking Runecraft is a cascading game with the 7×7 grid.

Viking Runecraft is a cascading video game set on 7 reels and 7 rows. There are 13 symbols in the slot including 4 higher-paying symbols, 5 lower-paying symbols as well as 4 wild symbols – Wild Odin, Wild Thor, Wild Freya and Wild Heimdall.

To get a winning combo you will have to land a minimum of five matching symbols in a connected cluster which means that all symbols need to touch each other either vertically and/or horizontally. When the winning combo is formed, the new symbols cascade down to fill the grid.

The more you win during the game, the better it gets as all the winning combos charge the meter of destruction. When the meter is full, it will trigger one of the four extra features or as Play’N Go calls them, the effects.

Two diagonal lines on the grid will be transformed to other symbols and two lines will be removed.

Three symbols will be set on fire, spreading to a random number of symbols in the proximity with all of them being burnt and removed from the reels. Instead, the new cluster of matching symbols will be created.

You can also trigger the Ragnarök feature, that awards you with one free game round, by double charging the meter. During this features, all Charge of Destruction effects will play once, and after that, the feature will end.

If all the above wasn’t enough for you, the Viking Runecraft slot also lets you benefit from 4 different Gods. When you’re playing and clearing up different patterns on the reels, you will reach the next level and face another God and his blessings or Gifts. The Gifts, in essence, are extra wilds triggered after the non-winning spins.

The Runes of Valhalla bonus game

Collect Rune Stone symbols to activate the bonus game. This is a wheel of fortune game where a player needs to hit the activated and lit Rune symbol and win the bonus amount. The more Rune Stones you collect, the bigger the amount you can win.

When the Viking Runecraft slot is launched, it will be available at the best and most generous UK online casinos that will not only let you give it a good old spin but also provide you with a very lucrative casino welcome bonus and loads of free spins. By clicking on the links in this review, you can play the game after the 27th April 2017 and get your hands on some juicy online casino freebies.

You can play the new Viking Runecraft slot starting from a minimum bet of 10p and up to the £100. The game comes with a rather high return to player rate of 96.7%, and the volatility is also very high at 8 out of 10 points.

With so many great bonus features, Gods Gifts and Special effects, we have no doubt that you will have a blast playing this slot. You also have an opportunity to win a decent 500,000 coins non-progressive jackpot.

If you are someone who appreciates Nordic Mythology, you will most definitely enjoy the Viking Runecraft that includes so many characters and events that you’ve heard about before.

The symbols on the reels are all Vikings’ armour and weapons, different runes and golden wilds.

We really appreciate the attention to detail and accuracy that Play’N Go developers showed when coming up with the slot’s design, soundtrack, characters and features.

After reviewing the game’s multiple features, effects and gifts, as well as unusual reel structure and very decent payout, we are going to play this game quite a bit after 27th April 2017.