The Hand of Midas slot game has players striving for gold. This hot new release from Pragmatic Play is top-notch! 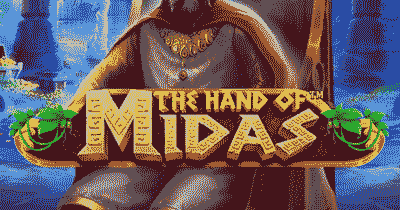 Pragmatic Play is known for its incredible graphics, and The Hand of Midas slot is no exception.

The Greek myth of Midas tells the tale of a man whose touch turned everything to gold. Pragmatic Play created an extravagant game based on the Midas tale.

Read our The Hand of Midas review to learn more about why this game has players excited.

The Hand of Midas Slot Information

The Hand of Midas Symbols and Payouts

The captivating online slot game features a 3×5 grid with 20 paylines. The reels spin left to right with epic background music.

With plenty of symbols of various ranks, the game is exciting and captivating.

By combining multiple special characters, players are in line for more lucrative winnings.

The King Midas symbol pays 2x for three on a line, 6x for four, and 20x for five, making it one of the most valuable characters in the game.

The wizard and Midas’ daughter rank next highest in value, reward up to 15x and 12.5x respectively.

The two mid-range symbols are the Golden Cup and Fruit Bowl.

The playing card symbols are the lowest ranking paying between 0.10x to 2.5x.

The ‘W’ wild symbol appears on the middle three lines awarding a random multiplier of 1x, 2x, or 3x to any win. The wild symbol is also your ticket for getting maximum wins in the bonus round.

The lowest is the ‘A’ symbol.

The Hand of Midas Min/Max Bets

The slot requires a minimum bet of £0.20 and a maximum of £100. The range allows for players with diverse bankrolls. To get the maximum win, you need to place the maximum bet.

The Hand of Midas RTP, Volatility, and Hit Frequency

When starting the game, four lightning bolts reveal that the game is highly volatile. Players should expect lapses in between wins. However, players experienced back to back bonus rounds.

The high volatility does imply dry spells, but also the allure of an epic winning streak. The Hand of Midas’ RTP of 96.54% ranks the game above average. The game does not advertise hit frequency.

The Hand of Midas Max Win

Your chance to win big is in this feature.

The Golden Touch from the Midas myth appears in the bonus round. Everything it touches turns to gold.

The golden hands spin the wheels revealing wild symbols that lead to the maximum win.

While the wild symbol is the most valuable, you should get excited when you land the golden touch-trigger symbols.

The Hand of Midas Features

King Midas, the Golden Hand and the Wizard symbol are among the most exciting features.

There is also an Ante Bet feature that increases bets.

Wild symbols elevate gameplay and winnings. An incredibly lucrative combination lies in landing sticky wilds plus multipliers. Wilds are sticky in the bonus round.

The game features various opportunities for multipliers with winning combinations.

The ornate ‘W’ wild symbol in the riveting online slots game acts as a multiplier.

Each time it lands, it multiplies wins by 1x, 2x, or 3x. When you land a wild, look to the right side of the screen to see how much your total winnings increase.

The wilds are also the most valuable symbol. The bonus rounds make them sticky and increase winnings.

The ante bet feature raises your base bet by 25%. Activating this feature adds more scatters to the reel, doubling the change of triggering free spins.

The Hand of Midas Free Spins

Free Spins, in the game, come with a minimum win guarantee. The number of trigger symbols landed determines the minimum win.

If you do not reach the set minimum, your free spins retrigger.

Wilds make the free spins even better. Landing a wild during free spins makes them sticky.

The wild symbol then multiplies winnings and continues to do so throughout the round. The multiplier increases as you land more wilds.

The Hand of Midas has an exciting bonus round for free spins. You trigger this feature by landing three or more golden hands on the reels. The start of the feature clears the reels. Mini-slots appear on the reels where trigger symbols landed. Each mini slot offers up to three free spins. Those looking to land to £500,000 will find the opportunity in this feature.

Playing the Hand of Midas makes you feel like you are a part of the epic Greek myth. The ornately animated symbols include Dionysus, the golden Midas’ daughter, and the Midas symbol itself.

While playing, you’ll notice the epic background music. It simultaneously makes you feel like you are in an epic battle and in an extravagant land—the sound rounds out the game’s experience.

Other Slots To Play If You Like The Hand of Midas

The Greek myth of Midas is not new for online slots. If you enjoy the theme, check out some similar games. Midas Golden Touch, from Thunderkick, spins off of the same story.

If you enjoy the graphics of Pragmatic Play, you’re in luck.

The provider has a wide range of top-quality slots. Some similar themes include the Egyptian designs in Mysterious Egypt ™ and Pyramid King ™.

The Hand of Midas covers all the bases for a good slot game. The high volatility beckons high risk and high rewards.

With extravagant graphics and epic design, the game wraps you in quickly. The exciting symbols and features of the game keep things interesting.

The well-executed animations bring the characters and reels to life. If you’re looking for where to play the Hand of Midas directly, check out the Pragmatic Play website.

The game is also available at VegasSlotsOnline.