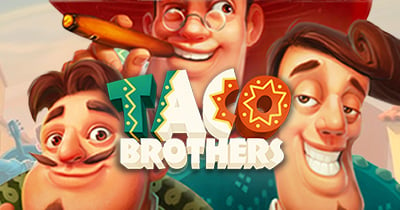 This funky, colourful and unique slot is based around the fictional Captain Diaz who tries to stop the villagers from eating their favourite tacos, but the three brothers Pepe, Pico and Paso come to save the village from this disaster. The game features 243 ways to win, Free Spins, Re-Spins as well as Wild Escape feature.

Let’s check the slots design, gameplay and winning possibilities and see which online casinos are offering you to play it right now.

Taco Brothers slot is set on 5 reels, 3 rows with 243 ways to win payout structure. The symbols on the reels include different coloured cacti, tequila bottles, shovels, lanterns and guitars as well as of course the three Taco Brothers – Pico, Pepe and Paso.

The wild symbol in the game is the golden bell that substitutes all the main symbols while the safe serves as a scatter.

The main attraction of the slot is without any doubt the Wild Escape Free Spins bonus round. To activate the free spins, you need to land the safe scatter symbols on the reels one, three and five.

At the beginning of the bonus round, you will witness the bomb explosion which will show you the level of your multiplier randomly chosen from x1, x2 and x3.

The new red set of reels appears for the free spins round, and the two new symbols will be added to the gameplay – Captain Diaz himself and a charming Señorita.

There is also a Re-Spin symbol that can show up on the second and fourth reels rewarding you with the 2nd spin and an opportunity to retrigger more free spins with 3 more safe symbols.

The Taco Brothers Free Spins benefit from the Running Wilds sub-feature – the brother’s’ symbols will be dropping one at a time on the fifth reel acting as wilds and going all the way through the reels.

But watch out for the Captain Diaz symbol which will lock the brother and stop his movement if he appears anywhere on the reels.

Señorita’s symbols, on the other hand, will unlock and release the wild brother symbols. This feature keeps going on until all the brothers end up locked up or escape.

When you decide that you want to give the cool and whacky Taco Brothers slot a good spin, choose well at which online casino you should play it.

What we mean is that you are better off selecting the best casino that not only lists this slot game on their website but also gives you a generously sized welcome offer.

Check the links above to see which casinos offer the biggest casino welcome bonus on the UK market right now.

You can play Taco Brothers slot starting from a minimum bet of 10p and up to a maximum bet of £50 per spin. The game offers quite a generous maximum payout of 150,000 coins and a decent return to player rate of 96.30%. 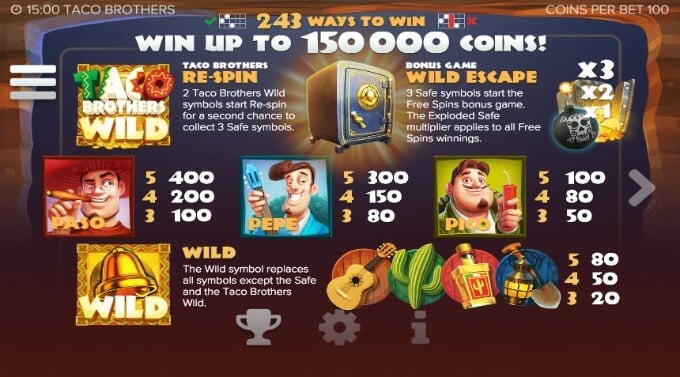 The design, theme and overall story are most certainly the strong points of the slot. Visually stunning, the game features great graphics, funny and cute characters, nice, relatable story and a catchy soundtrack.

Each of the brothers has his own traits – Paso loves his cigars, Pepe never leaves his guitar and Pico is obsessed with the explosives, but together they unite to protect their dusty and authentic Santa-Maria village from the evil Captain Diaz who’s trying to deprive people of eating their healthy diet of tacos.

You will probably also notice that the game is played perfectly on any device including mobiles and also covers bigger space on the screen than most other slots.

We really enjoyed playing this funny and sweet, cartoonish Mexican themed slot – there are not that many games that ELK Studious have released, but those that we gave a spin to are all most definitely worth it.

You will never get bored during this game thanks to funny characters and multi-feature free spins round with running wilds, re-spins and Captain Diaz and Señorita trying to lock and unlock the brothers. Give it a try; you won’t regret it!