Microgaming delivers a game to remember with the Shamrock Holmes Megaways slot - the first game by this provider to use Big Time Gaming's megaways mechanic. 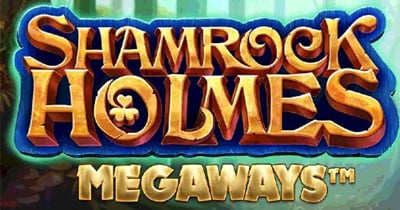 Microgaming delivers a game to remember with the Shamrock Holmes Megaways slot – the first game by this provider to use Big Time Gaming’s megaways mechanic.

It’s not your average video slot and has up to 117,649 ways to win during its Magical Re-Spins round.

Shamrock Holmes Megaways also comes with two more bonus features to look forward to with unlimited multipliers during the free spins bonus and rolling reels to increase your chances of winning.

Shamrock Holmes Megaways slot is an entertaining and mystical mix between the famous Sherlock Holmes character and a lucky Irish Leprechaun, who’s also your most valuable symbol on the reels.

You’ll be immersed in this magical world while waiting for lady luck to smile down on you and possibly deliver the maximum win of 28,000x your total bet.

Read our Shamrock Holmes Megaways slot review to find out how to trigger these exciting features and where to play this title with a casino bonus.

Looking for a licensed casino where to safely give this game a try? Check out the below recommended operators, which have now added Shamrock Holmes Megaways to their collection, and which will also offer a bonus on first deposit!

The slot has an interesting layout with six reels, plus one additional reel on top of the grid.

The game features the megaways mechanic with a different number of symbols on each reel at every spin (between 2 and 7) and offers up 117,649 ways to win.

The main character in this game is Shamrock Holmes. He’s a cheeky looking bloke and a perfect mix of Sherlock Holmes and a lucky leprechaun. On the reels with him, you’ll find a W wild, gold coin scatter, cloverleaf, pixies and pretty flowers.

There are also low paying card symbols that range from 9 to K.

The payouts in Shamrock Holmes Megaways are relatively low. The detective is your most valuable symbol and can pay an instant 50x your total bet when you land six on a payline. The pixie with the gold pot pays out 5x your bet and the four-leaved clover 2.5x your bet for 6 symbols.

Shamrock Holmes Megaways has a betting range between £0.20 and £20. The maximum bet may seem small, but keep in mind that you can win up to 28,000x your maximum betting total.

The slot has a developer RTP rate of 96.44%. With its medium volatility range, you can expect regular smaller wins to keep you occupied while waiting for the big one to land.

Although the slot doesn’t have a progressive jackpot, it does offer a high winning potential during the free spins bonus feature. The multipliers that accompany this are what you need to land the ultimate prize of 28,000x your total stake. That’s a whopping £560,000 if you win at maximum bet.

Wilds, Respins and other base game features

The W wild symbol has an interesting place where it appears on the reels. It can stand in for any other symbol to form a win, except for the scatter.

The wild symbol is the letter ‘W’ on a block. It can only appear in the extra top row on the screen. When it does, it replaces all other symbols to help form more potential winning combos.

There are unlimited re-spins to trigger during the free spins round. To get a re-spin you must line up a pixie, Holmes and a scatter symbol on the same spin. It also activates various mega ways of either 10,000, 32,400, or 177,649.

As soon as you land four gold coin scatters on your screen it triggers ten free spins.

A 2x multiplier kicks in from the very first free spin and increases 1x more with every win during this bonus round. If you land three more scatters in the top row it re-triggers three more free spins.

The multiplier and re-triggered free spins are limitless, and it’s during this feature that you can end up bagging the amazing 28,000x big win.

Microgaming did an outstanding job with the HD graphics and 3D animations. Each symbol is crisp, clear and very colourful.

The soundtrack is mellow and charming until you spin the reels. Then it escalates and races up your heartbeat as you wait for the bonus features to light up your screen.

Other slots to play if you like Shamrock Holmes Slot

If you enjoy Greek mythology, you should give Divine Fortune Megaways slot from NetEnt a spin. It’s another video slot game that uses the BTG megaways mechanics.

The slot has multiple bonus features to keep you well entertained such as free spins, falling wilds and a wild on the wild feature.

If you love games with this game mechanic in particular, check out our guide to the Best Megaways Slots for more excellent slots to try out!

As if the Megaways mechanics and a massive winning potential aren’t enough to bet on Shamrock Holmes, the developer went all out with superb graphics and bonus features. There’s absolutely no reason not to take this exciting game for a spin.