An impressive take on a classic formula, Scroll of Dead is an attractive and modern slot game based on ancient Egyptian history. With an above-average RTP and the potential for wins of up to 7,500x the stake, this is a title that might not tread new ground, but it does exactly what it was meant to! 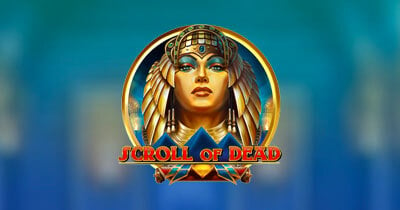 Play N Go has released another sequel to its Egyptian ‘dead’ series, with its latest Scroll of Dead. Scroll of Dead is a 5-reel slot featuring a set of symbols that are designed in a strikingly familiar manner to those in Book of Dead and Book of Duat.

But what else can this slot offer? You’ll find out in our Scroll of Dead Review below.

How I tested Scroll of Dead Slot

Reviewing Scroll of Dead was a matter of playing it for a good number of rounds, and seeing how well it stacks up in a competitive market. This includes the following steps

First, this meant placing a range of high and low bets, to experience the game in action.

From this point, I took a closer look at the special symbols and investigated what they added to the game.

I triggered the bonus round to evaluate how rewarding the game’s special features could be, both at first and over longer sessions.

Finally, I rounded out my time with autoplay, soaking in the audio/visual presentation and measuring how it performed against some of the other big modern slot titles.

Play Scroll of Dead with the Best Bonus

Scroll of Dead comes from popular developer Play’N Go, which means it’s freely available over some of the biggest online casinos around. These include:

Novibet Casino – get up to £150 on first deposit, plus benefit from regular free spins promotions

PlayOjo Casino – get up to 80 Book of Dead wager-free spins on deposit, & benefit from regular offers free from wagering requirements!

Skol Casino is a great choice at the moment!

With so many different websites offering Scroll of Dead, you have a lot of different avenues to play. While I would personally suggest Skol Casino for UK players due to its huge welcome bonus, any casino listed on our reviews page that offers Play’N Go titles is fine if you already have a preference.

Scroll of Dead features 10 symbols that pay out from left to right.

Taking an unusual route, the game doesn’t have separate scatter and wild symbols. Rather, these are both combined into one.

Symbols within this game start with the usual card symbols as the lowest-paying ones. The higher-paying symbols borrow directly from ancient-Egyptian history, with the Cleopatra symbol functioning as the most valuable. Besides this, in decreasing order of value, you’ll find a golden snake, a jeweled bird, and a golden ankh.

You only need to land 2 matching symbols on a payline in order to form a win with the higher-paying symbols and the wild!

The RTP of Scroll of Dead sits at 96.28%, towards the high side of what online slots offer.

Scroll of Dead is a high-volatility slot, meaning you’ll generally get fewer wins, but with a good potential for higher wins.

As indicated by the volatility, hit frequency in Scroll of Dead is generally low.

The maximum win afforded by Scroll of Dead is 7,500x the original bet. This is possible during the free spins round, if you manage to fill up all reels with wilds or Cleopatra symbols.

Scroll of Dead is a simpler slot, but a very playable one!

This is a slot game that falls somewhere in the middle of the pack when it comes to symbols and volatility, but this is in no way a bad thing. Rather than stretching itself too thin, Scroll of Dead knows exactly what it wants to achieve, and its base components work towards this idea as well. I’m a big fan of games that understand the market, as Scroll of Dead definitely does.

Scroll of Dead comes with a few special features, including bonus rounds, and expanding symbols and reels.

Wilds, re-spins, and other features

The wild and scatter both share a symbol, the blue and gold scarab. Three or more of these on a single payline grant access to the eight free spins bonus game (plus you get a payout as well!).

The bonus round in Scroll of Dead starts with 8 free spins, which are played out on a reel set with one additional reel. This 6th reel enables you to form 6-symbol willing combinations.

What’s more, a symbol is chosen at random during these spins, to act as an expanding symbol for the duration of the round. This symbol can also help form wins in non-adjacent positions.

Landing 3 or more additional scatters at any time during this round will also reward you with extra spins, and there’s no limit to these retriggers!

There’s no way to buy a bonus with Scroll of Dead. However, using the gamble feature may increase your win amount, if you’re ready to risk it!

Scroll of Dead makes an odd choice by combining scatter and wilds, but it works

Ignoring the different wild and scatter symbols had me worried at first that this game was cutting corners, but playing it gave a different impression. This might be a simplified system, but it’s still a lot of fun to play. And of course, the free spins round with its extra reels and expanding symbol is a joy to play, and comes with the potential of some big rewards!

Scroll of Dead offers a great take on a famous theme

For both audio and visual design, Scroll of Dead leverages the Egyptian theme extremely well. My only issue with this is that the theme might be a bit trite for some players at this point.

Now and then, we all experience certain technical issues. Here are some tips from us that might help if your game fails to load or crashes:

Scroll of Dead is a solid title, though one which doesn’t set the world on fire in terms of originality. Great graphics, well-designed music, and an easy-to-understand bonus system work in this game’s favour. The only real problem I could see some players having is that it doesn’t push the envelope, but for those after a well-designed, if simple, slot, Scroll of Dead could be well worth a look.

Other slots to play if you like Scroll of Dead

Chances are that if you like Scroll of Dead then you might enjoy other games with similar historical or mythological themes. Great titles along these lines include: