Play N Go’s next release this February is going to be a 3-reel slot with just 1 payline, something rather… 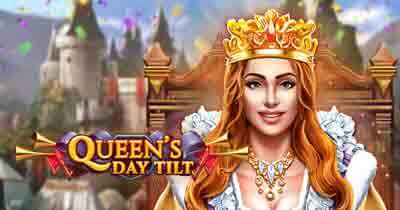 Play N Go’s next release this February is going to be a 3-reel slot with just 1 payline, something rather out of the ordinary for this day and age! Queen’s Day Tilt is one of the best new online slots we’ve come across this year; set in medieval times, this game comes with a couple of awesome features thanks to which you may end up winning up to 5,000x the stake! Read our full review of Queen’s Day Tilt slot to learn more about it and to discover which online casinos will be offering it as part of their game collection soon!

Queen’s Day Tilt slot will pay on a 3×3 grid with cascading symbols, where wins are achieved by landing 2 or more symbols in a row either horizontally or vertically. This means that the same symbols can form part of multiple winning combinations at the same time. Symbols include the four card suits, which are the low-value symbols, 3 medium-value shield symbols and 2 higher-value knights. There’s also a wild symbol, which is the Queen herself, and which can substitute for any other symbol. The Queen wild is also the most lucrative symbol in Queen’s Day Tilt. 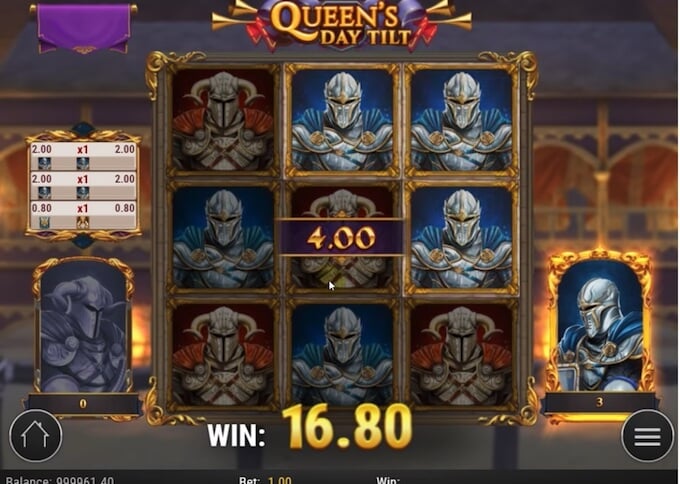 If you land on a winning combination involving 3 identical symbols while playing Queen’s Day Tilt, a wild will be created in the middle of this winning combination to help you win more. Another feature you’ll come across is called The Ruler feature, which can be triggered at random on any non-winning spin. In this case, 1 wild is added to the grid (without covering a high paying symbol), helping you form a win.

If you win with both of the knight symbols during the same spin, this will trigger the Game of Accession feature in Queen’s Day Tilt slot. You will now get 1 free spin, during which only the two knights will land. Before the spin takes place, players will have to gamble on which knight they think will give them the highest return following the spin, which will lead to one of the below 3 outcomes:

Last but not least, the Queen’s Day free spins can be triggered if the grid is cleared of all symbols but 1 (though you can expect a number of instances where you’re left with one symbol and this doesn’t happen, which is pretty annoying!) Players will start the round with 5 free spins, during which there will be no low-value symbols on the grid. What’s more, these spins start with a 2x multiplier on wins, which will increase if you win with both high-paying symbols on the same spin. Both The Ruler and the Tilt feature will be at play here too, and the free spins can be retriggered by clearing the grid from all symbols again (you’ll get another 5 extra spins if this happens).

If you’re looking for a casino bonus to use up on Queen’s Day Tilt, keep an eye on the current offers that casinos may be running on new slots. It’s not unusual to come across a slot tournament or free spins bonus on a new slot game by Play N Go. Alternatively, sign up with a casino that offers a welcome bonus on slots, so you’ll be able to play Queen’s Day Tilt with bonus money!

Once it’s released, you’ll be able to play Queens Day Tilt slot by staking from as little as 10p up to £100 on each spin. The RTP is set at 96.36% and volatility is high, so watch your bankroll here! That said, if you enjoy the risk, you’ll also be thrilled with the win potential of up to 5,000x the stake!

There’s nothing particularly impressive with the graphics in Queen’s Day Tilt slot; the campsite in the background is blurry, so that the large-sized symbols on the reels look more prominent, and it’s nice to watch them explode as you form winning combinations. The soundtrack is typical of what we’re used to hear in medieval-themed games and movies – a little bit cliche if you ask us, but the game does its job of rendering the theme. 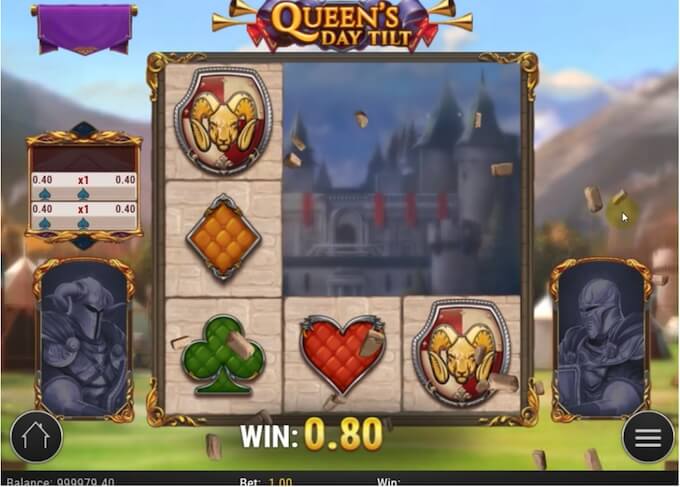 This game is nice to try out if you’re looking for something different, but we suspect it’s going to be very difficult to reap the biggest rewards. Clearing the grid of all symbols but one is not an easy task, and it’s even more frustrating when you’re left with just one symbol and still nothing happens. That said, the knights feature and free spins will reward you with decent payouts, so if you don’t mind the high volatility, Queen’s Day Tilt is worth a try! To enjoy a similar-themed slot by Play N Go, we also suggest Battle Royal slot, which we found to be more fun and interesting, or browse for Microgaming’s popular Avalon slot if you fancy multipliers of up to 7x!