Royal Flush is an online slot from Play'n GO. Read our review below to learn about this game's Long Live the King feature and more. 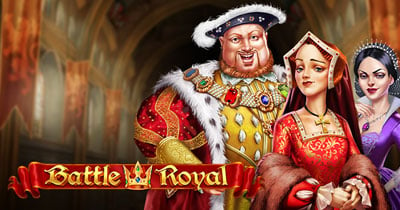 Based on the notorious Henry the VIII and his 6 wives, Battle Royal is Play N Go’s new title this December. This game makes light of the monarch’s evil deeds in a rather comic yet rather morbid way, enabling players to benefit from Henry’s wives’ beheadings! Read our full review of Battle Royal slot to learn about its original free spins and bonus features before you step back in time to the Tudor era to help Henry VIII with his devious plots!

Battle Royal is a 5-reel slot with 20 paylines set inside a Tudor castle, with red royal drapes adorning each side of the reels. Symbols include low value clubs, diamonds, hearts and spades, and Henry VIII’s six wives. The wild symbol in this slot is King Henry himself; this symbol also pays out the highest payouts and rewards you with 30 times the stake for a 5-symbol combination. 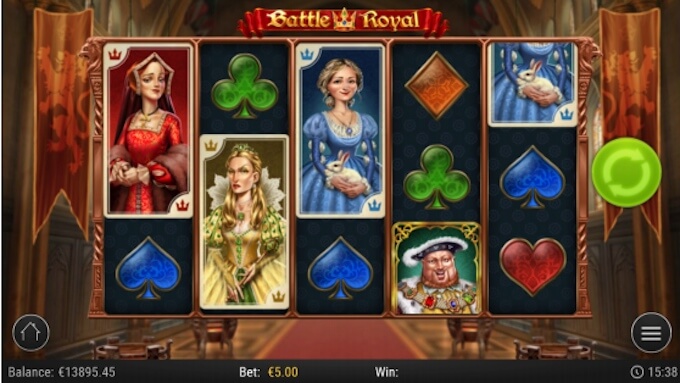 During the base game of Battle Royal, you can randomly trigger the Royal Flush features on any spin. When you do, all low-value symbols on the reels will transform into the same randomly chosen symbol to help you form winning combinations.

If you land on the coat of arms scatters simultaneously on reel 1 and 5 in Battle Royal slot, you’ll get to pick 1 of these triggering scatters. This will reveal which one of the game’s two bonus features will be activated: you could either get to the free spins or directly through to the Long Live the King feature via these scatters.

If you get the free spins feature, you will have to choose 1 of the 6 wives and keep your fingers crossed that she will survive the guillotine! Then, on every spin, one of the guillotines on top of the reels will drop, and if one of the wife symbols is visible either fully or on the top half of that reel, she will be beheaded and the symbol will turn into a wild for the duration of the feature! However, if the bottom half of the wife is visible on the top row, the wife is not beheaded and does not turn wild. The free spins will continue until 1 wife symbol remains. If it’s your chosen wife symbol that survives, you’ll also win a cash prize! You must then choose which reel you would like to place the remaining wife, before one guillotine falls from one of the reels.

If the guillotine falls on the last remaining wife, you’ll trigger the Long Live the King feature. If it falls onto another reel, the bonus round will end and you’ll be taken back to the base game. If you’re lucky enough to get to the Long Live the King feature, you must help Henry collect loot and escape the haunted dungeon. This is done by picking from a number of chests that will reveal cash prizes. After every chest you pick, you’ll see a ghost of one of Henry’s wives floating across the screen to haunt him and punish him for his crime! If Henry gets in the way of the ghost, he will die and the bonus feature will end – in this case, players will get the total win from the round. If you manage to pick the chest containing a key, this will allow you to escape the dungeon and get a mystery multiplier applied to your total winnings. If the player enters the Long Live the King feature via the free spins, this multiplier is applied to the total win from free spins and the bonus feature! Players can also choose to continue picking more chests to win more instant prizes instead of going for the mystery multiplier – this is particularly risky, since the cash prizes will likely be less than the amount of the multiplier on the total wins especially if Henry dies soon after! 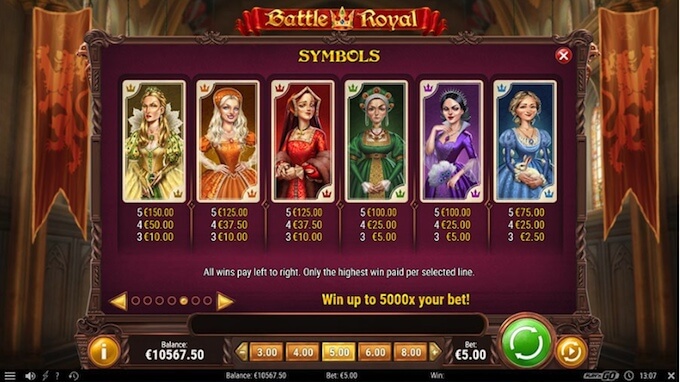 If you were hoping to play Battle Royal slot with a bonus, the best thing to do is join an online casino in order to be eligible for the welcome offer. A lot of casinos offer a deposit match bonus on first or second deposit, which enables you to play any game in their collection with bonus funds. This is a great opportunity to try out a new slot without risking your own money! Check out the casinos we recommend below, which will likely add Battle Royal slot to their collection once it’s released.

Where to play Battle Royal slot

Battle Royal is playable by staking from 20p to £100 on each spin, which makes it great for low and high rollers alike. The game has a decent RTP of 96.56%, and volatility is very high, which is to be expected when you’ve got the potential to win up to 5,000 times your stake on a single free spin!

Battle Royal slot comes with top-notch graphics and cool animations which give the Tudor theme a light-hearted twist. The 6 wives are designed in some detail, each one displaying her own individual personality. We like the creativity that’s so evident in their ghostly versions in particular; some of them look like the headless ghost from Harry Potter!

Battle Royal is a good new game to try out if you don’t mind the ultra-high volatility, and we believe it’s worth giving it a few spins, if only for the fun of it! Of course, it will take time and a good dose of luck to trigger the bonus features and reap the game’s biggest rewards. We haven’t tried it ourselves yet, so we’re hoping that there will be enough entertainment and decent payouts during the base game to keep us spinning! If you love the royal theme, we would also recommend Royal Family slot by Yggdrasil Gaming. Try Battle Royal out at one of the best online casinos as from the 11th of December 2018 to enjoy something a bit different to the norm!