We are taking the journey to the ancient Egypt with NetEnt 2015 slot release Pyramid Quest for Immortality. The slot… 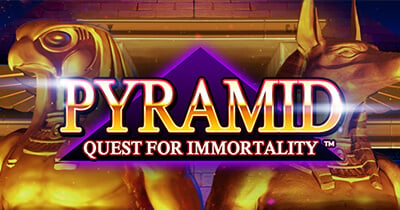 We are taking the journey to the ancient Egypt with NetEnt 2015 slot release Pyramid Quest for Immortality. The slot shows The Pharaohs, his mistresses, and the famous golden scarabs among other traditional Egyptian symbols. It has an Avalanche feature made popular by the Gonzo’s Quest slot that will help you to keep increasing the multipliers. Let’s get a closer look at this stunning slot’s design, features and see how much you can possibly win by playing it at one of the best UK online casinos right now.

The symbols on the reels apart from Egyptian stylised card values also include all the correct paraphernalia such as Pharaoh, Sphinx, Cleopatra’s mask, golden snakes and eagles as well as the mysterious bejewelled beetle called scarab.

One of the most notable features of this slot is, of course, the Avalanche technology. Instead of spinning reels, the symbols fall to the bottom, with some of them exploding when they create a winning combination and more space for the new symbols. This will keep happening as long as you have some sort of a winning combo. Once you have consecutive Avalanche winning falls you will get a multiplier on your winnings. The multiplier will increase by 1 and goes up to the maximum of x10 with every 3 Avalanches. It will stay at the maximum level of x10 until you have no more winning combos.

The wild symbol is a golden ankh – the Egyptian symbol of life that looks a bit like a golden cross on a purple background. The wild only appears on the second, third and fourth reel or column when the symbols on top of the reel create a part of the winning combo. When that happens all the top symbols will turn into wilds and stick to their position substituting the other symbols as long as you keep having the winning rounds. 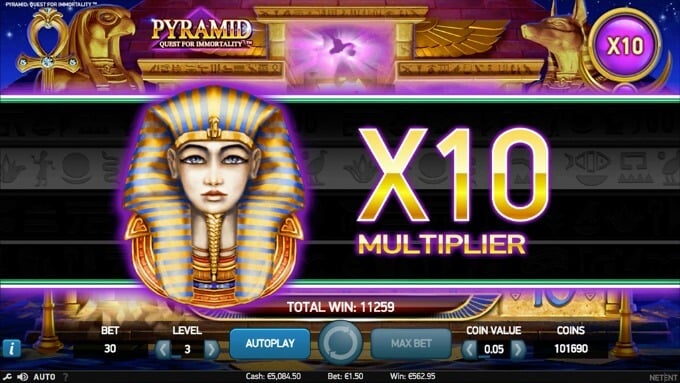 Sadly enough there are no free spins in this game. That’s kind of unfortunate, but still, the game is profitable enough as it is. Plus if you choose to play the Pyramid Quest for Immortality slot at one of the most generous UK online casinos from our list below, you can get more than 400 free spins for other NetEnt games as well as a casino welcome bonus up to £1,500.

Where to play Pyramid Quest for Immortality slot

You can play Pyramid Quest for Immortality slot starting from a minimum bet of 10p and up to a maximum bet of £200 per spin. You can win an absolutely massive x36,000 your stake jackpot if you’re lucky enough to score the x10 multiplier. The slot has a decent RTP rate of 96.48%. 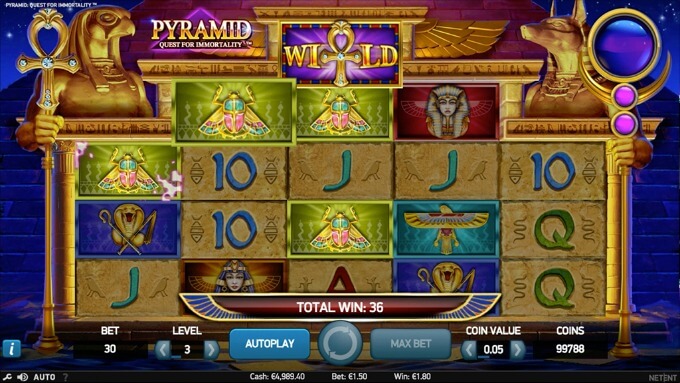 This is one of the most stunning and unique looking slots from NetEnt. The background and symbols all done in a very appealing combination of Golden and Purple colours with very detailed symbols and cool special effects of the falling and exploding symbols.

The game can be played smoothly on all devices including desktop as well as mobile and tablet with the NetEnt Touch version of the Pyramid Quest for Immortality slot.

You can be absolutely sure that you Egyptian adventure will be very impressive from the design standpoint.

If it wasn’t for the lack of Free Spins, the Pyramid Quest for Immortality, it could have been one of the most perfect slots ever created. Because there is definitely enough to keep you excited – 720 ways to win, good RTP, breath-taking design, cool Avalanche feature, x10 multiplier and 360,000 possible win. What’s not to like?