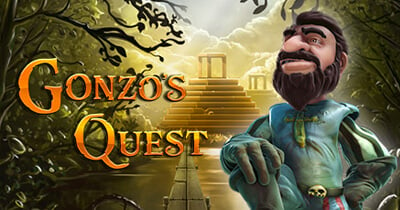 Welcome to one of the most popular slots ever released by NetEnt – Gonzo’s Quest.

The slot was created back in 2010 and since then became platinum and has a cult following all over the world.

The game is based on the legendary figure of Spanish conquistador Gonzalo Pizarro, who is going through a Peruvian jungle in a search for the mythical lost city of Eldorado, full of gold.

It is a beautifully done 3D slot with some unusual features and great possibilities for decent size winnings. Let’s have a closer look at the game and see what sort of free spins and bonuses we can get from it.

The slot has your typical 5 reels, 3 rows and 20 paylines.

The symbols of the game are designed in the Mayan style and look like the elaborate carvings that look similar but have different colours like red, orange, purple, light blue, brown, green and blue.

There are also, of course, the Wild Symbol, which is a grey stone with a question mark on it and a special gold Free Fall block symbol with an Aztec face on it.

One of the unique features of the Gonzo’s Quest slot is the Avalanche feature – what it means is that unlike most slots the reels of the game are not spinning but instead the symbols are falling down in an avalanche style from the top.

The stone symbols also tend to explode creating a lot of dust and dramatic effects. When you accumulate your wins in this game, you can also trigger the multiplier which starts from x1 and keeps going until x5.

When you spin – or make the stones fall – and win, you get the first multiplier; if you keep winning the multiplier increases until you reach and unlock the maximum x5.

Don’t worry, you won’t be missing out on the free spins in the Gonzo’s Quest slot, they are just not called Free Spins as such. Instead, you have a bonus game called Free Fall feature.

To trigger it you need to land at least 3 of the golden Free Fall symbols on a single payline.

This will give you 10 free falls and increased multipliers. The multiplier will keep increasing from 3x, 6x, 9x and 15x and you can also retrigger more free spins while this feature is active.

You can play Gonzo’s Quest virtually everywhere as most online casinos understand the importance of offering this mega-hit to the players. But when you decide you want to try it out, choose well.

We have selected the UK online casinos that are not only reliable and amazing, but also generous enough to offer UK casinohawks.com readers the biggest welcome bonuses on the market.

It just doesn’t get any juicier than the bonuses below.

You can play Gonzo’s Quest slot with a minimum bet of 40p and a maximum bet of £100.

The return to player rate is 96%, which is not extremely high, but the nice fact is that you get hits 41% of the time. Maximum win with the slot’s non-progressive jackpot is £93,750.

The game is absolutely beautiful and very atmospheric, and you can clearly see how much effort and attention to detail went into the creation of this 3D slot.

We definitely recommend you not skipping the video intro of the game, as it’s very entertaining and sets the mood for the slot.

The background is a luscious jungle and golden city of Eldorado and of course, the Gonzo’s figure is all over the place in this game.

As you keep winning he makes some pretty funky moves including a moonwalk.

On the 7th February 2017, the NetEnt game developer announced that Gonzo’s Quest is about to be released as their first ever virtual-reality real-money slot.

It is the way for a successful game developer like NetEnt to join the rapidly emerging Virtual Reality (VR) market that more and more players are willing to experience.

We cannot wait to try out Gonzo’s Quest as a proper VR slot with fully immersed experience that cannot be compared to anything else.

It is for a reason that this slot got such an enormous popularity – excellent quality graphics, very strong Eldorado theme and characters, unusual Avalanche features, large jackpot and the impressive hit rate – all of it makes this game very enjoyable and gives you a good chance to score a big win.

Join millions of happy players all over the world and try the Gonzo’s Quest slot game now.