Planet of the Apes

NetEnt game developer has now released its exclusive franchise slot Planet of the Apes. Based on two 20th Century Fox… 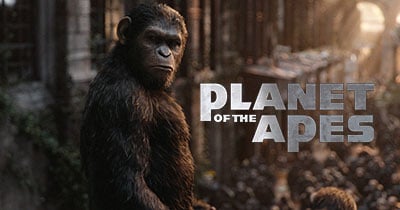 Play Planet of the Apes here

Planet of the Apes review

Planet of the Apes slot features

NetEnt slots are always at the forefront when it comes to innovative and lucrative bonus features, and Planet of the Apes slot is no exception. The slot features dual reels, Rise and Dawn, both containing 5 reels and 20 paylines. Symbols on the reels feature the characters from the two different movies, as well as A, K, Q, J and 10 card symbols. Both reels have their own rewards in store, which makes for a truly innovative and entertaining gameplay! 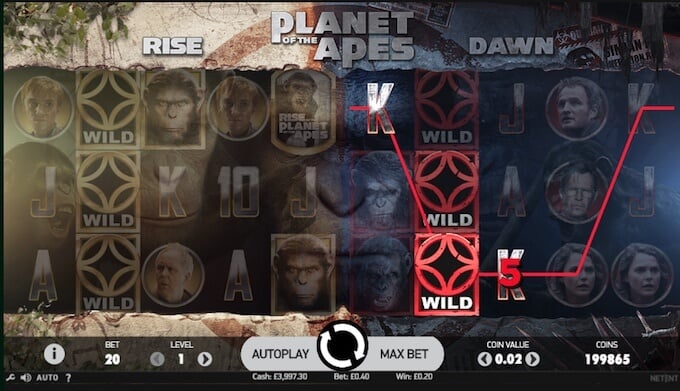 This slot also contains a wild symbol, in the form of the attic window. When this symbol appears fully stacked on the Rise reel, this will trigger the Stacked Wild feature: the reel with the stacked wild is then duplicated onto the corresponding reel in the Dawn area. On the other hand, when the Rise Bonus symbol appears on the first reel, this leads to a cash bonus for each human and ape that appears on the Rise reels, which can lead to wins of up to 79.5x your stake!

The Dawn Bonus feature is activated when the Dawn Bonus symbol lands on the last reel; once this happens, the ape and human symbols change into the same random symbol in the Dawn set of reels, giving you the potential of winning 1,200x your stake.

Randomly during the game, players may also end up benefitting from the slot’s Dual bonus feature; in this case, one symbol is chosen from each set of reels, so that the reels will only contain that symbol, whereas the rest will display blank spaces. If the symbol lands in its corresponding set of reels, it sticks into position, and if it lands on the other set, it will be transferred across to the other set. Players can then get re-spins, which may continue to be awarded until no more new symbols are added in either set.

Each play area in Planet of the Apes can trigger its own free spins feature. Let’s have a look at what you can expect:

Rise Free Spins: the game awards a total of 10 Free Spins upon landing on 3 or more Rise scatter symbols on the Rise reels during one spin. During this feature only the Rise area is active and the number of Wild symbols that appear are collected in a Wild meter. During the final spin, all collected Wild symbols are randomly placed on the reels before the total win is calculated.

Dawn Free Spins: players are rewarded with 15 Free Spins upon landing on 3 or more Dawn scatters anywhere on the Dawn reels during one spin. During the feature, players need to collect three collect symbols to fill one of the meters, which can lead to a win multiplier up to x5, extra wild or 3 additional free spins. Similar to the Rise Free Spins, only the Dawn reels remain active during this round.

As with most NetEnt slots, you can always be sure that you’ll be able to play Planet of the Apes slot online and get a very generous online casino bonus coupled with extra free spins. A lot of casinos that cater to the UK market are now offering this game, so that you may quickly access it by clicking on the links in this review.

Where to play Planet of the Apes slot online

You can now play Planet of the Apes slot from 20p to £200 per spin across all devices. The game is of high volatility and has a decent RTP of 96.33%, and has a good hit frequency during the base game. Lucky players can end up with a maximum win of 3,000x their stake via the 5x multiplier during the Dawn Free Spins feature, but needless to say, it’s not easy to land such a win!

Planet of the Apes slot graphics and sounds

Just as we expected, this NetEnt slot comes with stunning graphics, with cut scenes from the movies to remind you of the story. You’ll be spinning the reels to a powerful soundtrack which creates an atmosphere of suspense and even danger – however, in this case, these sound effects only signal the excitement that’s about to unfold thanks to the game’s features! All in all, both graphics and sound effects are top notch and make for a very entertaining gameplay.

Planet of the Apes slot – our conclusion

We’re sure that this slot release won’t be a disappointment for fans of the famous blockbuster movies. The game truly brings the movies back to life, and thanks to its bonus features, it’s very difficult to get bored while spinning those dual reels. We did find it particularly difficult to trigger some of the game’s bonuses though, so you have to be careful not to get too carried away by the slot’s amazing visual and sound effects! Try your luck on Planet of the Apes slot today, and make sure you take advantage of a casino bonus for a chance of risking less on this highly volatile slot.

Watch our exclusive video of Planet of the Apes slot