It’s all about pirates and their stolen treasures in Red Tiger’s new slot, Pirates Plenty, the Sunken Treasure, and we… 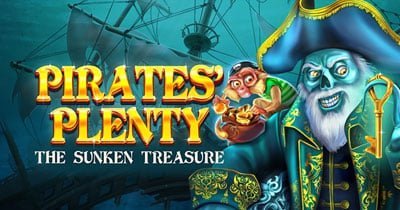 It’s all about pirates and their stolen treasures in Red Tiger’s new slot, Pirates Plenty, the Sunken Treasure, and we must say, we were pleasantly surprised when we started spinning: what with the attractive visuals, the highly anticipated Treasure reel, the occasional appearance of a cheeky wild monkey and a promising round of free spins, there’s plenty going on in this game! Our review of Pirates Plenty slot below will explain what kind of riches are in store if you join in this pirate adventure! 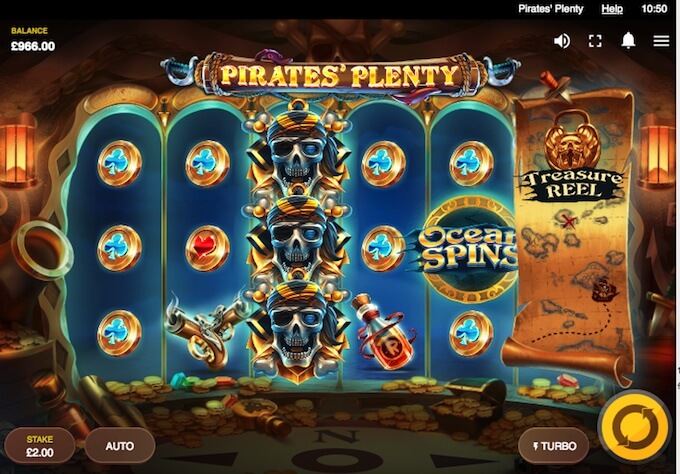 Pirates’ Plenty is a 5-reel slot with 20 paylines, and an extra 6th reel displaying a treasure map. Symbols on the reel include golden coins with gems in the shape of the 4 playing card suits, a bottle of alcohol, a cannon, muskets, a captain’s hat and a skull, with the latter being the most rewarding symbol that pays out up to 50 times the stake if you land 6 on the reels.

There’s also a treasure map symbol, which you collect once it lands in order to progress on the Treasure Reel (you’ll notice the pirate ship on the map progress towards the destination each time you land on one). When it reaches the destination, you’ll trigger the Treasure Reel feature, and the 6th reel will open to remain activated for as long as you keep staking the same amount (so once you activate it, you’re in for the rest of your spins that day). Not only will there be an extra reel, but the Wild Ships feature will also be active from then on. You will see ships in a bottle that can fill up entire reels and turn them wild. A multiplier of 2x, 3x or 5x may even be applied to wins with these wilds!

On the other hand, you may trigger the Wild Monkey feature any time during the base game. Whenever the monkey’s ship forms part of a winning combination, the monkey will hop from reel to reel, collecting all the low-paying symbols. Then, players will get a respin, during which only high-value symbols will land for a guaranteed winning combination!

The free spins feature in Pirates Plenty slot is triggered by landing 3 Ocean Spins scatters. You’ll start with 10 free spins, and during this round a ghostly ship captain will land frequently on the reels. Whenever he does, he will give you the key to one of the locks on the 3 treasure chests at the top, starting from the smaller treasure chest. Once you unlock a chest (by getting 3 of these keys), you’ll get a number of additional spins and 1 low-value symbol will also turn into a wild. This means that if you keep on unlocking the other treasure chests, you can have several extra wilds, increasing the potential to win big!

As Red Tiger games are gaining more and more popularity, it’s becoming easier to claim a bonus that you can use on these slots. What you need to do is a join an online casino that offers games by Red Tiger, make at least the minimum deposit, and claim a deposit match bonus if available. Then, use the bonus money to play Pirates Plenty slot or other games in the casino’s collection. The below casinos will welcome new players with a match bonus on deposit.

Where to play Pirates Plenty slot

You will be able to play Pirates Plenty slot by staking from 20p to £40 on each spin as from the 28 of February 2019. The game RTP is set to 96.12% and variance is quite high, so you can expect it to take a while to unlock the Mystery Reel or the free spins. However, hit rate during the base game is still very good, and payouts can amount to a maximum of 2,000x the stake per spin if you get the 5x multiplier.

It’s hard not to like the artwork and graphics of Pirates’ Plenty. The animations have been given that quirky touch, and the colours of the symbols and reels contrast really nicely (plus, you have to agree that the monkey is kinda cute!). The soundtrack serves to immerse you in this pirate adventure, whereas sound effects are sharp and powerful, evoking a sense of immediacy and exhilaration!

Pirates’ Plenty is a job well done on Red Tiger’s part, and we think this game has all the ingredients to succeed: stunning visuals, a good hit frequency, extra features and an original way of unlocking more and more rewards via the Treasure Reel and the chests in the free spins feature. If you don’t mind the high volatility and have the patience to keep spinning for the best rewards, we highly recommend giving it at a try at your favourite Red Tiger casino to enjoy all the entertainment this game has to offer!