John Hunter and the Mayan Gods

Win a spectacular treasure of up to 2,500x Take advantage of the 96.51% return-to-player (RTP) rate Go on the archaeological… 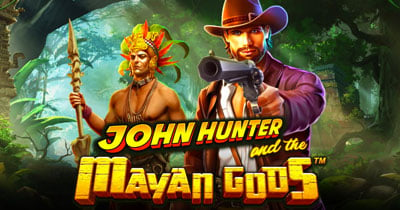 John Hunter and the Mayan Gods is a brand-new release by slot giant Pragmatic Play. If you enjoy themed slots with a lot of mystery, you won’t want to miss out on this one!

Accompany us as we investigate the RTP, volatility, theme and where to play this slot in our John Hunter and the Mayan Gods review.

Play John Hunter and the Mayan Gods from the UK!

This new exciting slot by Pragmatic Play is available online at the best online casinos in the UK! Check the ones below if you wish to try it out!

John Hunter and the Mayan Gods Symbols and Payouts

At 10 paylines, this slot offers surprisingly few win lines for a five-reel slot. Considering that the game has only three rows, however, things begin to make sense.

John Hunter and the Mayan Gods supports a total of 12 different symbols, two of which are special images. As you’d expect, the symbols with the lowest values are the four face card images.

John Hunter is the most valuable symbol, followed by a Mayan warrior. The game also boasts a dagger, a ring and a dragon.

The remaining two symbols are the wild and scatter symbols. We’ll discuss them in detail later on. Altogether, the images help to conjure the scene of an adventurer in the South American jungles!

With 12 different symbols, it’s apparent that there is a wide array of values at play. At the low end, the jack, queen, king and ace all share a value of £0.50 for three symbols.

However, the other end of the scale is much higher. At the highest rank, John Hunter has a value of £10 for three symbols.

As with the paytable, there’s plenty of variation between the minimum and maximum wagers. It isn’t a slot for high rollers who habitually bet £200 on a spin. However, there’s a wide enough range to satisfy most gamblers.

The minimum wager is £0.10, and the maximum is £100. However, most gamblers don’t spend £100 on a single spin and should enjoy the middle ranges.

As you can expect from a Pragmatic Play slot, the John Hunter and the Mayan Gods RTP compares favourably with similar slots. At 96.51%, you can expect fairly regular returns.

Unfortunately, the volatility is at odds with the RTP. The volatility for this slot fills the highest possible and ranks 5/5. Accordingly, you can’t expect a fantastic hit frequency in the short term.

With the advent of progressive slot machines, many of us have come to expect major jackpots. However, John Hunter and the Mayan Gods slot doesn’t offer that type of gargantuan jackpot.

John Hunter and the Mayan Gods offers a spattering of exciting features. Whether it’s the multi-tiered free spins feature or the multipliers, you’re bound to love it!

If you’re looking for walking wilds or stacked wilds, you’re barking up the wrong tree. However, if you have an interest in expanding wilds, then you’ll love this one.

The wild image in John Hunter and the Mayan Gods looks like one of the many Mayan deities. The fantastic feature about this wild symbol is that it’s an expanding wild.

Whenever a wild symbol hits a space where it can make matches on one of the rows, it expands to fill all three. Wild symbols are only able to land on reel two, three and four.

The wild can substitute for any symbol except a scatter and has no value of its own.

Apart from activating free spins, scatter symbols have another use in this game. If you land three or more scatter symbols, they act as a wager multiplier.

John Hunter and the Mayan Gods has a fascinating free spins arrangement. Whenever you hit three or more scatter symbols, the game launches a free spin session.

The scatter symbol takes the form of a Mayan temple and has the word ‘scatter’ embossed on it. The amount of scatters that you get isn’t related to the number of free spins. Whether you get three, four or five scatter images, you’ll still get 12 free spins.

On the second level, all the chalices on the reel become daggers. The next level changes all the daggers into rings. When you level up once again, the rings become dragons.

If you continue to stick around, the next level turns dragons into Mayan warriors. The next and final level sees all the warriors becoming John Hunter.

At any time during the feature, you can add 12 free spins by getting three more scatters. You can add an unlimited amount of free spins by landing wilds and scatter symbols.

The feature will continue at whichever level you manage to reach until you run out of accrued free spins. An astute player might notice that every level of the feature removes the lowest-valued symbol and replaces it with a symbol of higher value.

If you manage to play the free spins to the sixth level, you’ll have mostly the symbol with the highest value.

The graphics on the John Hunter and the Mayan Gods slot are excellent, and every iota screams Mayan adventure. The symbols and images fit the theme perfectly, and the reel animations aren’t overdone.

The background music is very exciting, although a bit discordant and distracting. Nevertheless, the slot features a lot of adventurous music and exciting sound effects.

The provider has done a fantastic job of bringing all the elements together into a single theme.

Whether it’s the excitingly adventurous theme or Pragmatic Play’s unique style, you’re unlikely to dislike John Hunter and the Mayan Gods. Fortunately, it’s only one of many slots by Pragmatic Play.

Assuming you’d like to play another slot from this provider, here are some suggestions. Wolf Gold is a respin mega jackpot with a thrilling theme. Heat is a slightly amusing offering, centred around chilli peppers. The wild-west themed Gold is also very adventurous.

Perhaps you’re a fan of John Hunter himself. If so, you’ll be happy to hear that there’s an entire series of these games. John Hunter and the Tomb of the Scarab Queen is an Egyptian-themed slot with plenty of adventure.

For those of you in a South American mood, you may enjoy the John Hunter and the Aztec Treasure game.

While our John Hunter and the Mayan Gods review might have reached many verdicts, our conclusion was favourable. This game has an exciting theme that’s artfully incorporated into every aspect.

From the images themselves to the screen framing and the free spins, the graphics all match the theme. While the soundtrack and sound effects are a touch disturbing, they too help to back up the theme. What’s an adventure if there’s no sense of danger, after all?

The volatility of this game is extremely high, which means you’ll likely see a lower hit frequency. On the other hand, high volatility also means that you can win bigger prizes sooner. One way or another, the RTP of 96.51% indicates that you’re in for a healthy return.

We also adored the concept of a multi-tiered free spin feature. A true adventurer must make their way through all six levels to win the prize.

As if all these fascinating aspects aren’t enough, Pragmatic Play incorporated expanding wilds. With a maximum win of 2,500x your wager, you can’t ask for much more from this slot!