Several bonus games and features Up to 40 paylines to achieve the max win of x6,544 Stunning Christmas theme and… 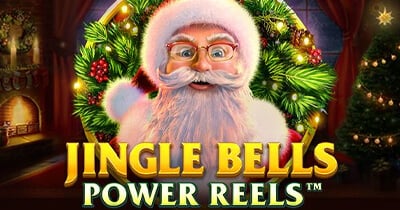 Jingle Bells Power Reels is one of  Red Tiger’s latest games to hit the gambling scene. It has gorgeous graphics with an 8×6 grid, and the RTP is at 94.68%. You’ll find plenty of bonus features around, such as Raining Wilds, Winning Reels, and Christmas Tree Multiplier.

Feel free to read about all these exciting Jingle Bells Power Reels slot review details below.

Play Jingle Bells Power Reels by Red Tiger at the below UK casinos! Tons of fun await together with a casino bonus for all new players!

The slot grid has eight reels and six rows, which isn’t something you’ll often see on online casino games. You’ll have the chance to win on 40 paylines, as long as you receive matching images from left to right across reels one to eight. Let’s have a closer look at the symbols and paytable.

While digging around the treasures for our Jingle Bells Power Reels review, we found a variety of symbols to fill the 48 slots. The most valuable images are the candy cane, stocking, star, decorations, and golden bells. You’ll also find card symbols from Ace to 10 with lower rewards.

Here’s a look at the paytable for matches between three and eight. As you can see, the bells provide the highest winnings at x600 for eight.

While hunting for where to play Jingle Bells Power Reels, keep a steady eye on betting limits. The lowest amount you can place is £0.20, which is excellent if you’re going to wager overall 40 paylines. The highest value you can set is £10 but account for the winning probability you have with so many reels.

You’ll find a Jingle Bells Power Reels RTP of 94.68% which is below our recommended 96%. Its high volatility means that you may hit those massive wins on occasion. However, you won’t often see matches in the base game, so it’s a good thing that there aren’t high bet limits.

There are no Minor, Major, Mega, or progressive jackpots available in this exciting Christmas game. If you’re aiming for the max win of x6,500, you’ll need to rack up the wilds and bonus features below for the best combination of prizes.

The casino game spoils you for choice when it comes to both the base game and bonus rounds. Red Tiger went all out and mixed several features from other titles into one. We’re going to walk you through them in the next section.

While there’s only one wild, it fulfils several purposes. Among other features, the game has a multiplier mode, which we’ll explain in more detail below.

When you receive the stacked gifts feature, it takes the place of any symbol except the scatter. Santa may also run across the screen and throw random wilds on the slots in the Raining Wilds feature. A Mega Wild may also appear over five reels and six rows for a greater chance at winning.

The decorated tree on the right side of the screen isn’t there merely for appearances. Santa approaches and randomly stirs it, waiting to see what gift you’ll receive. The present is generally in the form of a surprise multiplier.

Santa may also appear during the base game to grant you better reels. He’ll move from the first reel to the last, waving his magic over them. All card and low-value images will change to the higher-paying symbols.

Keep a lookout for the festive snow globe. When three or more appear, you’ll unlock free spins up to 23. Since you can also receive the base game features in this mode, you’ll have a chance at some big winnings if you’re lucky enough.

The fire roars and the candles flicker, with the soft Christmas lights twinkling on the tree. This visual is the scene that the game sets, making you feel at home. The reels spin on a large space in the centre as if you’re there.

Thankfully, the sound is as excellent as the visuals. There’s decent music in the background as you play, setting the right mood in anticipation for wins. The animation when Santa runs across for bonus features is also exciting.

Other Slots To Play If You Like Jingle Bells Power Reels

If you’ve had enough of Santa from this game, but still want some Christmas betting, try NetEnt’s Jingle Spin. It showcases Santa’s little helpers rather than the charitable, fabled figure. The animations like a master elf standing on the side and flipping a Wheel of Fortune make this game unique. When it comes to other features, spreading wilds, free spins, and a coin win bauble steal the show.

NextGen turns Christmas lore on its heels with Merlin’s Magic Respins Christmas. With his staff at the ready, he’ll turn standard symbols into wilds at every chance he gets. You can also unlock some free spins if he’s willing enough.

Santa is ready to spruce up the festive season with plenty of delightful features. The RTP isn’t too generous, but the risky gameplay will get you hooked in no time. Remember to play wisely, which should be straightforward with a £10 max bet.