The theme is set in the familiar sunny African landscape, with various animals making an appearance. The rhino symbol is the main focal point, however, as it can unlock that mouthwatering jackpot. 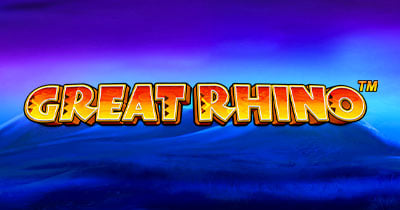 Great Rhino Deluxe is the third title in this collection from Pragmatic Play. The series began with Great Rhino, which was then succeeded by Great Rhino Megaways.

Now, you can play the deluxe version, which is available at various online casinos in the UK. The game shares many similarities with its predecessors, but a few welcomed changes are also present.

Like before, the features include re-spins, free spins, and two fixed jackpots.

However, the grid is now reduced to five reels, and the graphics have significantly improved.

Great Rhino Deluxe is a five-reel video slot with three rows and 20 fixed paylines. A minimum of three matching symbols in order from left to right will earn you a win.

This means that the first winning symbol must appear on the leftmost reel.

Great Rhino Deluxe’s theme is inspired by wildlife that you’re likely to see on a safari.

To match this theme, the background depicts a typical African landscape, complete with Acacia trees, a bright blue sky, and grazing animals.

On the reels, you can encounter nine regular symbols. Six of these are high paying symbols that depict different animals, while the other three symbols are low-value playing cards.

The high-value icons include a rhino, a cheetah, a gorilla, a crocodile, a hyena, and a flamingo. The playing cards consist of Q, K, and A.

There are also two special symbols to keep an eye out for: a wild and a scatter. A gold rhino coin acts as the wild symbol, while the scatter is represented by a tree with an orange sunset in the background.

The most rewarding symbol is the rhino, which pays out 20x your stake for five matching images. The low-value playing cards all award 1x your bet for five of a kind.

You can stake a minimum of £0.20 per spin. If you want to go all-in, the maximum is £100. While you can’t change the number of paylines, you can choose to bet between one and ten coins per line.

The game also offers an autoplay option, where you can select up to 100 automatic spins at your desired bet level.

This is a slot with medium volatility, which means it pays out steadily. However, payouts can range from low to very high. Additionally, the Great Rhino Deluxe RTP is set to 96.54%, while its hit frequency is currently unknown.

The major jackpot is worth 375x your stake, while the grand jackpot is valued at 500x your bet.

In this slot game, you can activate a handful of exciting features. These include:

Wilds, re-spins, and other features

A gold rhino coin acts as the wild symbol. It can substitute for all symbols, barring the scatter, to produce winning combinations. Additionally, it appears on all reels, so keep an eye out for this valuable icon.

To trigger this feature, you need at least two reels with fully stacked rhino symbols to appear in a spin. These rhino icons will remain in place for the duration of the feature.

The round starts with three re-spins. Every new rhino symbol that lands on the reels awards an extra re-spin. On top of this, some rhino symbols can carry a random 2x multiplier.

Additional multipliers will multiply each other as well, significantly increasing your payout. You can receive the largest multiplier of 6,242x your stake in this feature.

Remember, at the end of this round you can also win one of the fixed jackpots if 14 or 15 rhino symbols remain on the reels.

This feature activates when three or more scatter symbols land on the reels. Here, your reward is ten free spins. However, keep in mind that the scatter only appears on reels two, three, and four.

During this feature, rhino symbols are collected in every round. After you play the ninth spin, all collected rhino symbols reappear on the grid in random positions. Any further winning combinations that occur are paid out accordingly.

Pragmatic Play has upped their game and introduced significant changes to the graphics in this series. Great Rhino Deluxe features colourful, vibrant, and high-quality images that keep you coming back for more.

Additionally, it incorporates a well-thought-out soundtrack that emits feel-good vibes. When you enter the Super Re-Spins feature, the animals go wild, and a horde of rhinos stampedes across the screen when you trigger a feature.

Other slots to play if you like Great Rhino Deluxe

Setting off on a safari adventure is an unforgettable experience. However, it’s not always feasible. Luckily, you can experience this thrill in the comfort of your own home with these animal-themed safari slots:

Great Rhino Deluxe provides you with the chance to escape reality and enter a completely new world.

Here, you can listen to the peaceful sounds of a rhythmic drum while you watch the animal-filled reels spin.

On top of this, you can even bag yourself some wins along the way.

To sum things up, the blend of audio and visual effects along with rewarding bonus features pulls the slot together perfectly.