Game of Gladiators is an online slot from Play'n GO. Read our review below to learn about this game's Fame feature, Enraged feature, and more. 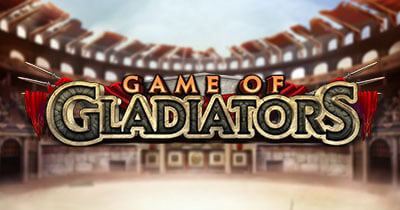 The Roman Gladiators have become a very popular theme lately when it comes to online slots – perhaps it’s got something to do with the risk involved in these scary battles, that’s reflected in the risk of staking real money for a chance to win big. Who knows, what’s certain is that these gladiator slots tend to be fuelled with action and packed with features, and Play N Go’s new Game of Gladiators slot is no exception! With 5 base game features and a rewarding free spins round, this game comes with the potential of paying out up to 5,000x your stake! Read our review of Game of Gladiators slot to learn more about it ahead of its release this June 2019!

Game of Gladiators is a 5-reel slot with 20 paylines. Symbols on the reels include the usual J to A royals, and the gladiators called Scissor, Provocator, Murmillio and Rectiarius. There’s also a wild, which is the tiger symbol, and which is also the highest-paying symbol in the game, paying out 25 times the stake for a 5 in a payline. 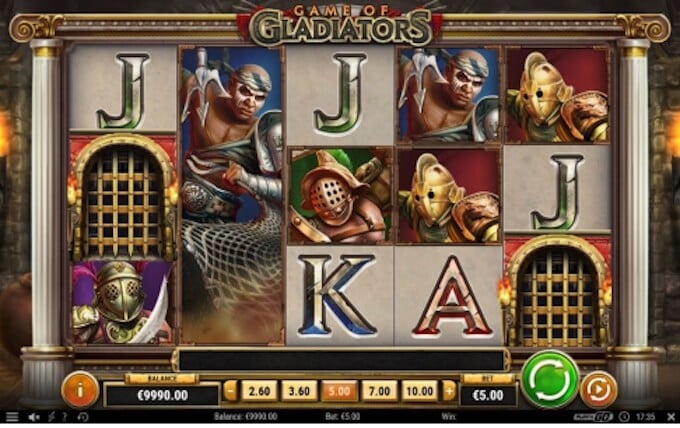 In the Game of Gladiators base game, players can randomly trigger 1 of the following 5 Primus mystery features:

Fame feature – a Gladiator is chosen and players will get a bonus payout according to the Battle Prize paytable.

Spear Attack – between 3 and 6 tiger wilds will be added randomly to the reels.

Sword Attack feature – the 1st reel is duplicated between 2 and 4 times.

Net Attack feature – all the gladiator symbols on the reels are held in place, and a respin follows, giving you the chance of forming a good combination with these premium symbols.

To get to the free spins in Game of Gladiators slot you need to access the Enter the Arena Battle feature by landing 3 scatters on reels 1, 3 and 5. Once you gain access, you get to select a Champion to replace the scatter – you can select either the Spartacus scatter or the Amazonia scatter, which are male and female champions respectively. This Champion will then function as the scatter during the feature, and its aim will be to fight groups of gladiators.

The battle will start as soon as a scatter lands on the reels. Any matching high-value symbols will be grouped together at the top to power the Battle Meter, and the larger the group, the larger the prize for destroying it will be! For every scatter that lands, there will be 1 attack on the group of gladiator symbols. If 2 scatters land, 2 groups will be attacked, while 3 scatters will attack 3 groups. What’s more, if you land 2 or 3 scatters, a 2x and 3x multipliers will apply to the Battle Prize for the particular group attacked.

The free spins will continue endlessly until the battle is won or lost. The chosen Champion can win the battle by defeating all the opponent groups at the top, and loses if he or she allows more than 11 opponents to fill up the Battle Meter. What’s more, each of the two champions has a different Victory Prize if they win; Spartacus will give you another round of free spins (only once), whereas Amazonia’s victory will involve a stake multiplier of between 20x and 100x! This prize is awarded on top of any winnings accumulated from the bonus feature, of course!

If the above sounds complicated and you would prefer to play Game of Gladiators slot with a bonus before risking any real money, then take note: a lot of Play N Go casinos welcome new UK players with a deposit match bonus, allowing you to use this bonus money to play slots. All you’ve got to do is join a new online casino and claim the welcome bonus, then search for Game of Gladiators slot and wager the bonus on it! We’ve suggested a few reliable casinos below, which will be offering Game of Gladiators slot as from the 6th of June 2019.

Where to play Game of Gladiators slot

UK players will be able to give Game of Gladiators slot a spin with real money by staking from 20p to £100 on each spin. The game’s RTP is 96.42% and volatility is very high. You can win up to 5,000 times the stake in this game if your champion does well in the battle!

We haven’t had the chance to play Game of Gladiators slot yet, but from the looks of it, and also given Play N Go’s reputation, you can expect the game to come with impressive visual and sound effects, especially once you trigger its various features.

Game of Gladiators slot – our Conclusion

We look forward to giving Game of Gladiators slot a spin given its diverse features and promising bonus round. Although we suspect that it will be hard to get to the free spins, we sense that this will be a game that a lot of players will enjoy if they don’t mind the high volatility. Look for it at your favourite UK online casino as from the 6th of June, and in the meantime, if you enjoy the gladiator theme, we can also suggest the popular Gladiator slot by Playtech, or Quickspin’s Tiger’s Glory slot, which may pay up to 13,830 times the stake!