Tiger's Glory is an online slot from Quickspin. Read our review below to learn about this game's Enraged Tiger's Free Spins feature and more. 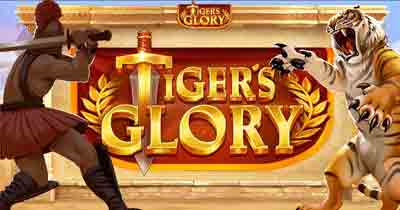 Set in Ancient Rome at the time of the gladiators, it’s the tiger takes centre stage in Quickspin’s Tiger’s Glory slot – while playing this game, you’ll end up cheering each time the Tiger emerges victorious in its battle against the gladiator, since the tiger’s glory will simply mean higher payouts for you! This is a very volatile title which promises potential payouts of 13,830 times your stake – quite unlike Quickspin, we must say!

Featuring 4096 ways to win, plenty of free spins and sticky wilds, Tiger’s Glory is a game to look forward to if you love a bit of action an don’t mind a battle or two. Keep reading our full review of Tiger’s Glory slot to learn more about its features and find out at which online casinos you’ll find it as from the 13th of November 2018!

Tigers Glory is a 6 reel slot with 4096 ways to win which transports you to the Gladiator’s arena in Ancient Rome. Symbols on the reels include 9, 10, J, Q, K and Ace playing card symbols as well as 4 gladiators and a tiger symbol, which is the most rewarding. There’s also a wild symbol, which is the wreath, that replaces all symbols except the scatter and the Tiger. Winning combinations in Tiger Glory slot are formed by landing on 3 or more like symbols on adjacent reels, starting from the first reel, so it doesn’t really matter where on the reel this symbol lands, as long as there are matching ones on adjacent reels.

In Tiger’s Glory slot, 3 to 6 scatters on the reels will trigger the Enraged Tiger’s Free Spins feature: 3, 4, 5, or 6 of these scatters will reward you with 7, 10, 15 and 20 free spins respectively. During the free spins round, winning combinations don’t need to start from the leftmost reel, and this significantly improves your chances of winning. You’ll also get the Enraged Tiger symbol here, which looks similar to the Tiger in the base game but appears enclosed within a red frame to distinguish it from the other symbol. This Enraged Tiger triggers another bonus feature if it lands during the free spins – in this instance, the tiger will battle the Gladiator, and if it wins, the symbol will lock into position and act as a sticky wild until the end of the round. The first Enraged Tiger symbol that lands on every reel and wins a battle will give you 1 extra free spin, which means that you can get up to 6 extra free spins in total.

You’ll find slots by Quickspin at plenty of online casinos these days, given this developer’s popularity. The best thing to do in order to play Tigers Glory slot with a bonus is to sign up with a new Quickspin casino that offers a deposit match bonus, so you’ll be able to play this game with some bonus money. The below online casinos welcome new UK players with such a bonus, which is subject to specific wagering requirements.

Tigery’s Glory can be played by staking from 40p to £100 per spin. The game has an RTP of 96.51% and volatility is super-high, so keep in mind that it might not be for you if you’re a low-roller and after frequent payouts. During the free spins, Tiger’s Glory has the potential to pay out massively though – the maximum win is 13,830 times the stake if you’re lucky here, but expect quite a lengthy succession of non-winning spins before you get to the bonus round!

The reels in Tiger’s Glory slot are set inside the arena of a Roman Colosseum, and are enclosed within magestic stone columns. Visually, the game looks great and also contains some special effects – the tiger symbol comes to life when it lands during the free spins, so you’ll get to watch a short battle between it and the gladiator. All the action is accompanied by a lively soundtrack that will put you in the right mood for the battle!

When Quickspin announced the upcoming release of Tiger’s Glory slot, it aroused a lot of expectations – firstly, it’s unusual for a Quickspin slot to be so volatile, and secondly, the rewards in store and the special features involved in unlocking them sound extremely tempting.

While you wait for it’s release on the 13th of November, you may also try out Playtech’s Gladiator slot, which is inspired by the same theme and may also pay out big given its progressive jackpot.

Last but not least, do consider your choice of online casino before playing any slot online – a good welcome offer or other regular bonuses can significantly boost your bankroll so that you may play for longer and have a bigger chance of winning more!