Try Falcon Huntress for yourself if you’d like to play a simple but powerful and highly-volatile slot, and don’t forget to claim a bonus if you’re new to a casino! 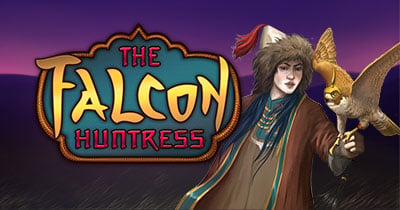 We’ve just had a look at Thunderkick’s first slot release of the year, The Falcon Huntress slot, which we learnt is based on the popular 2016 documentary, The Eagle Huntress.

It seems that in this slot Thunderkick has kept things fairly simple, although that surely doesn’t mean that the rewards are less impressive than usual!

Keep reading our full review below to learn more about this new game and to find out which online casinos have already added it to their collection! 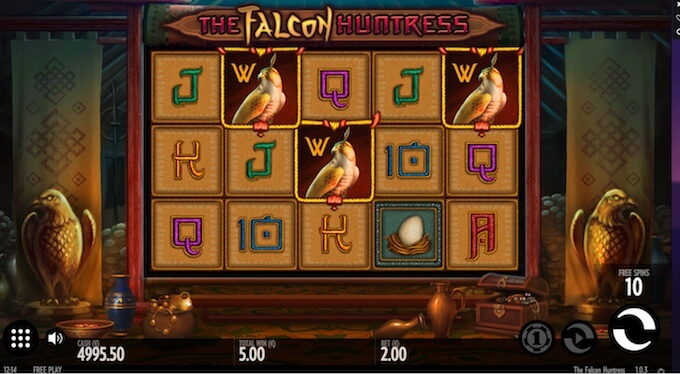 Falcon Huntress slot is a 5-reel slot with 9 fixed paylines, featuring the traditional 10 to Ace card symbols, and falcon-themes symbols that include feathers, falcon eggs, the Ayak baus and the falcon huntress herself, which is the highest paying symbol that gives you up to 500x your stake for 5 in a line!

The slot also has a goldon falcon symbol which functons as a wild – landing on 3, 4 or 5 of these symbols will give you 2, 20 and 200x your stake respectively.

The wild replaces all symbols on the reels and also acts as a scatter which triggers the slot’s bonus game.

Once you manage to land on 3 or more Wild/scatter symbols in Falcon Huntress slot, this will trigger the Bonus Game where you’ll receive 10 free spins.

There is the possibility of activating an additional 10 free spins by landing on 3 or more scatters during this round, up to a total of 20.

Whilst playing Falcon Huntress slot, you may randomly trigger the game’s Expanding Wins feature upon landing on any winning combination.

In this case, all winning symbols will expand over the entire reel, which will lead to considerably bigger wins!

The Wild symbol is the only one which won’t expand, and your aim is to trigger this feature after landing a high symbol combination (such as the Falcon Huntress symbol), in order to secure the slot’s best rewards!

If you like the sound of the above and would like to try playing The Falcon Huntress for real money, then we suggest signing up with a casino in order to claim a welcome bonus.

Welcome bonuses can differ from free spins, deposit matches or both, and sometimes can also be staggered over two or more initial deposits!

You may consult our full list of casino bonuses here.

You can now play Falcon Huntress slot by staking from 10p to £10 per spin. The slot has an RTP of 96.1% and is a high volatility slot which pays out an impressive prize of 100,50x your stake if you manage to trigger the Expanding Wins feature after landing a win with the falcon huntress.

Via this feature, we’ve managed to win 405.00 by staking only 2.00 (see our screenshot below), so you can imagine the rewards in store for high rollers!

In terms of graphics and ambience, The Falcon Huntress slot makes an impressive impact given the atmosphere it evokes.

The reels are set in a temple, and symbols have been designed in certain detail, and the background is not static, since you can see the wind blowing from the movement of the fabrics surrounding the temple and the falcon huntress’s hair.

The sounds of several musical instruments that come together to produce the soundtrack are powerful and create an aura of mystery and suspense, perfect as you wait for that winning spin!

We must say that we enjoyed giving Falcon Huntress slot a few spins given the frequent payouts and the game’s impressive Expanding Wins feature.

Rewards during the base game can be relatively small, but once you do manage to trigger an expanding win you’re in with a chance of securing large payouts, and we were pleased to discover that this feature wasn’t that hard to trigger – although it might be that we were just going through a lucky streak!