Cash of Kingdom is full of cool features, including the Invading Wilds, which is active both in the base game and during free spins. 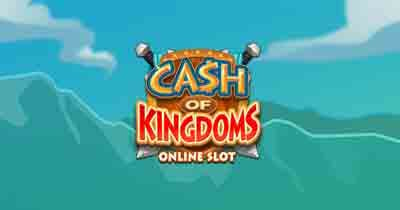 The slot Microgaming has unveiled at ICE Totally Gaming early this year has just been released: Cash of Kingdoms is a fantasy-themed slot set in medieval times.

Featuring original ‘Invading Wilds’ and free spins with a multiplier, we thought we’d give our readers an idea of what to expect from Cash of Kingdoms.

Keep reading our full review below to learn about this game’s potential and to find out which online casinos have already added it to their game collection.

Cash of Kingdoms slot is a 5-reel slot with 15 fixed paylines and colourful cartoon graphics inspired by the medieval-fantasy theme.

Symbols include bows and arrows, bombs, loot, books of spells, swords and shields.

The higher-paying symbols are the 5 characters of Rogue, Archer, Bombadier, Mage and Knight.

There’s also a wild symbol, which is the Cash of Kingdoms logo and which substitutes for all other symbols except the scatter.

The wild symbol appears only on the 3 middle reels.

When you land a full stack of wilds on the second or fourth reels, you’ll trigger the game’s Invading Wilds feature.

This will turn an adjacent reel wild in order to improve your chances of forming a winning combination.

To trigger the free spins round in Cash of Kingdoms slot, you need to land three treasure chest scatters on the reels.

You will then get 10 free spins, during which wilds will be super stacked (which presumably means that stacked wilds will land more frequently) on the second and fourth reels, to make it easier to to activate the Invading Wilds.

If you get a full stack of wilds on both of these reels, the third reel will turn fully wild and you’ll also get a 2x multiplier on your winnings!

Any other scatter that lands during the Cash of Kingdoms free spins will also award an additional free spin.

To get a better idea of how Cash of Kingdoms slot works and pays out, it’s always a good idea to play the game for free first.

You can do so at many online casinos powered by Microgaming, where you can also claim a bonus to use on any slot in their collection.

A deposit match bonus will allow you to play slots with bonus money, subject to certain wagering requirements.

Why not claim one from a new online casino to try out a few spins on Cash of Kingdoms?

You can now play Cash of Kingdoms slot by staking from 15p up to £435 per spin – this is one of the highest maximum bet we’ve ever encountered on a slot!

The game RTP 96.45% and volatility is on the low side, so expect regular payouts of smaller amounts.

From the information we have so far, the maximum win can amount to 300x the stake if you land a win during the free spins with the 2x multiplier.

Cash of Kingdoms graphics and sound

Cash of Kingdoms was designed to convey a jolly medieval atmosphere, with quirky cartoon characters and a nice, catchy soundtrack.

The visual and sound effects are nice to behold, and add to the fun and action.

Cash of Kingdoms slot – our Conclusion

There have been mixed opinions about Cash of Kingdoms so far. Some argue that the maximum win of 300x is too low, and that the features are not as original as Microgaming is claiming. We did expect more from this slot to be quite honest, although we do see good potential for those who don’t mind low-volatility slots.

When it comes to medieval-themed slots, we also recommend Yggdrasil’s Royal Family slot or the old Avalon slot by Microgaming, which both come with higher multipliers and a bigger win potential.

That said, if you’re in it for the fun, why not give Cash of Kingdoms a few spins? You can try it out for free and for real money by staking as little as 15p.

Check out the casinos we recommend on this page to get started, since they’re all licensed to cater to UK players and will also reward you with a bonus when you first sign up!