Sherlock Holmes The Hunt for Blackwood

Is there another character in the world’s literature that inspired more films and games than the glorified detective Sherlock Holmes? We seriously have our doubts about it. 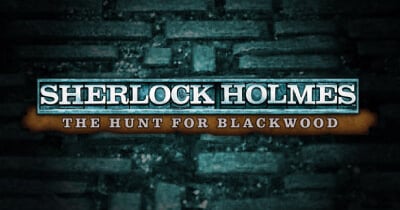 Let’s look at the slots for example – there is Holmes and the Stolen Stones by Yggdrasil, Sherlock Mystery by Playt​​​ech among many others. But the one that can easily beat them all is probably Sherlock Holmes The Hunt for Blackwood created by IGT and based on 2009 blockbuster starring Robert Downy Jr. and Jude Law as Sherlock and Watson.

It is a gorgeous slot that not only looks fantastic but also has a huge number of unique features and cool bonuses like you’ve never seen before.

IGT is known for maybe not releasing as many slots as NetEnt or Microgaming, but when they do a new launch, it’s most of the time quite impressive. And Sherlock Holmes The Hunt for Blackwood is definitely not an exception here.

Go on the hunt with Sherlock Holmes and John Watson – the ultimate idea is to make Lord Blackwood pay for his crimes and win some money along the way, of course.

The main symbols in this 5 reels, 30 paylines slot include of course the images of Sherlock and Watson, represented by the famous actors photos from the original movie.

There are also pocket watch, violin, Sherlock’s pipe, magnifying glass, dog, as well as Holmes’s love Irene Adler and Scotland Yard’s Inspector Lestrade. Holmes and Watson’s symbols are Wilds and substitute for all the other symbols.

There are so many features to choose from that you will never get bored playing this slot.

The Mystery Multiplier feature can be triggered after any main game spin which didn’t trigger a bonus. The range of Multipliers is from 2x to 10x.

The Teamwork feature turns all Holmes and Watson symbols into combined Holmes/Watson symbol. The paid values are shown in the paytable below.

Picker Puzzle is triggered by 3 Bonus scatter symbols on reels 1, 3, and 5.

You will then see Sherlock’s room where you can take 5 picks from the room’s objects and reveal clues to receive cash awards. 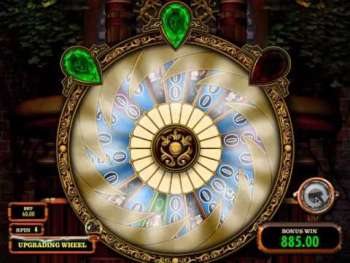 There are 3 pointers on the wheel; if an active pointer lands on a Blackwood wedge, the pointer gets deactivated. If all pointers are deactivated, the bonus ends.

If a pointer lands on a Sherlock wedge, all pointers will be reactivated and you are going to win the Sherlock prize.

Bonus Doubler feature will allow you to double your wins if at least one pointer is active after 10 spins.

With The Hunt Bonus, you can help Sherlock and Watson to locate five scenes of Blackwood’s crimes. If you find 3 map clues you will get 10 free spins and 4 map clues will give you 15 free spins.

The reels of the Hunt Bonus are not the same as the reels used in the main game. The free spins cannot be retriggered. Free spins are played at the same coin value and the same number of lines as the triggering spin.

If you feel like playing this rich in features and graphics slot right now, we suggest you to choose a great casino to do it in. Unfortunately, right now not so many casinos have Sherlock Holmes The Hunt for Blackwood slot in their portfolio, which is a bit of a pity.

However, we have searched everywhere and found a few casinos that not only will let you enjoy this slot but will also give you one of the biggest possible welcome bonuses on the market and some extra free spins on sign-up as well.

Check them out below.

The minimum bet you can place in this slots is 60p per spin and the maximum bet is limited to £300 a spin, which is a lot compare to many other slots.

The average return to player is quite high with 96.39% and the game offers medium volatility. Maximum jackpot you can win in Sherlock Holmes The Hunt for Blackwood is 5,000 times your bet. 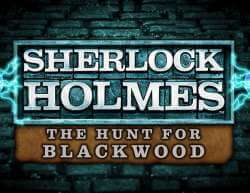 Sherlock Holmes The Hunt for Blackwood slot graphics and sounds

All the graphics and sounds in this game are based on the original Warner Brothers production, so you can expect to see the familiar imagery from the original film by Guy Ritchie.

The IGT managed to get a copyright to use images of Robert Downy Jr. and Jude Law as well as the music from the film.

The game looks fresh and exciting with lightning strikes pointing out your winning combinations and the soundtrack creates a certain suspense and mystery as you would expect from a detective story based slot game.

Sherlock Holmes The Hunt for Blackwood Slot – our conclusion

It takes a while to get used to so many extra features but they bring you a thrilling experience and the game overall is quite balanced and extremely entertaining.

The graphics and music are amazing and if you like Sherlock Holmes stories or a fan of the two main actors in the original film, you will most definitely enjoy this game a lot.

We highly recommend giving this slot a good spin as it is a highly unusual experience in itself. Will you help Sherlock to solve the Blackwood’s crimes?