NetEnt has taken their old slot ‘The Invisible Man’ and turned it into a fun Christmas slot where Santa and Rudolf clash on the reels of this Santa vs Rudolf slot. 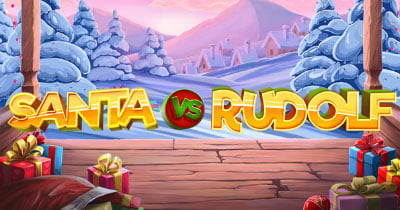 What are they fighting about, you might ask? Christmas is just around the corner and Santa is busy taking care of the last details before the big delivery on Christmas eve. Instead of leading the reindeer, Rudolf is up to mischief and has stolen Santa’s hat! Santa is furious and has challenge Rudolf on the reels of this incredibly fun slot. So keep on reading to check out what you’re in for as you play Santa vs Rudolf slot once it is released on the 28th November 2019

This slot packs a lot of fun in its 5×3 reels and 20 fixed pay lines. The game pays both ways and features a number of walking wilds, free spins, and 2 bonus features. The reels are set on Santa’s porch, between cheeky Rudolf and poor Santa, and feature the card suite A, J, Q, K and 10 shaped like candy canes. They are the lower value symbols of this slot with wish lists, snow globes with miniature reindeer inside, naughty Rudolf’s collars, presents and Santa’s sleigh as the higher value symbols. Santa’s sleigh carries the highest payouts of x25 your stake.

An interesting addition to this slot is the Santa meter and the Rudolf meter at the top of the screen. These meters are filled one space at a time, every time Santa or Rudolf appear during the free spins feature. If you manage to fill the meter before the feature ends you’ll activate either the Santa bonus or the Rudolf bonus.

The Rudolf bonus is the only one that opens the small window to hit the jackpot if you have wagered the maximum bet, which can award you the sum of £100,000.

With Christmas approaching fast, and this game expected to hit popularity once it is released, you can rest assured that many casinos will include it into their Christmas promotions. So, check out our special offers section for any new Christmas related promotions. In the meantime, a number of casinos are offering a welcome bonus consisting of free spins or bonus money which you can use to try out this slot once it is released on the 28th November. The below casinos should be amongst the first to feature this slot.

This game can be played for a small amount of £0.20, up to a maximum bet of £100. This slot comes with an RTP of 96.35% and has a medium to high volatility. When it comes to the maximum possible it is just x1000 your stake. When multiplied by the maximum bet allowed, it carries the jackpot of £100,000 only.

Santa vs Rudolf graphics and sounds

The graphics of this game are fun and cartoonish with the reels set on Santa’s porch overlooking the snow-covered landscape of the North Pole. Santa is sometimes depicted in despair and sometimes angry, while naughty Rudolf is always depicted cheekily putting his tongue out at Santa while wearing Santa’s hat. The animations when Santa and Rudolf clash are done in great detail and appear comical, adding plenty of entertainment.

The music is fun and adds comic to the whole story of Santa and Rudolf’s big Christmas fight.

Santa vs Rudolf – What we think

If you are looking for a fun game this Christmas with plenty of entertainment, then you should play Santa vs Rudolf slot from the 28th November 2019 onwards. Although it does not promise high payouts, it does pack tons of fun. You have to leave it up to NetEnt to reinvent one of their older games into something truly entertaining that might even become a Christmas classic to be played for years to come.