Ivan and the Immortal King

Ivan and the Immortal King is an online slot from Quickspin. Read our full review below to learn about this game's free spins bonus round and more. 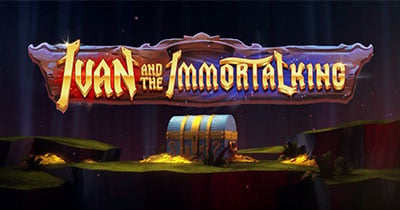 Ivan and the Immortal King review

If you don’t mind a touch of magic and Russian folklore, then Quickspin’s new release, Ivan and the Immortal King, may appeal to you and perhaps even bring you some luck this December! Featuring free spins with increasing multipliers and massive payouts of up to 40,000 times the stake, this high variance slot is certainly worth a closer look! Read our review of Ivan and the Immortal King slot to learn more about it and to find out where you can already play this new game online!

Ivan and the Immortal King is a 5 reel slot with 20 fixed paylines inspired by the Russian legend of Ivan Tsarevich, who defeats the immortal king Koschei after the latter kidnaps his warrior princess, Maria Morevna. Symbols in the slot include green, orange, purple, red and blue gems, dragons, wolves, the princess, the evil King Koschei and Ivan himself, which is the highest paying symbol. There’s also a wild symbol which replaces all other symbols except the scatters and which pays out as much as Ivan. 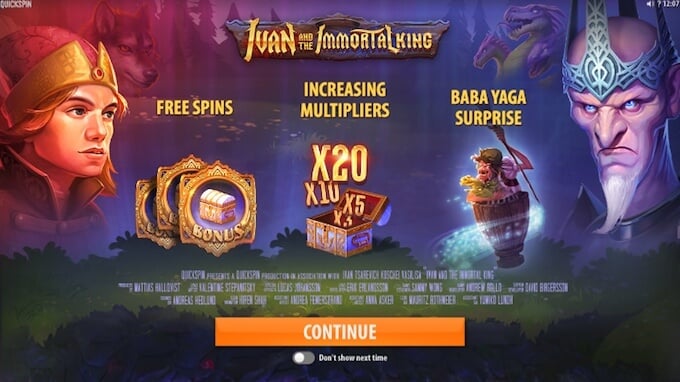 On any base game spin, you may trigger the Baba Yaga Surprise feature – in this case, the witch Baba Yaga (a Slavic witch which is known to be either a helper or a villain, at times hindering and at times helping those who encounter her), appears on the reels and may help you in one of 2 ways:

When you land on 3 or more chest scatters on the reels, you’ll access the free spins feature in Ivan the Immortal King. 3, 4 and 5 chests will give you 10, 14 and 18 free spins respectively. This is when the levels indicated by symbols to the left of the reels become relevant – you can see the chest at the very bottom, the hare on top of it, then the duck, the egg, the needle and the skull at the very top. 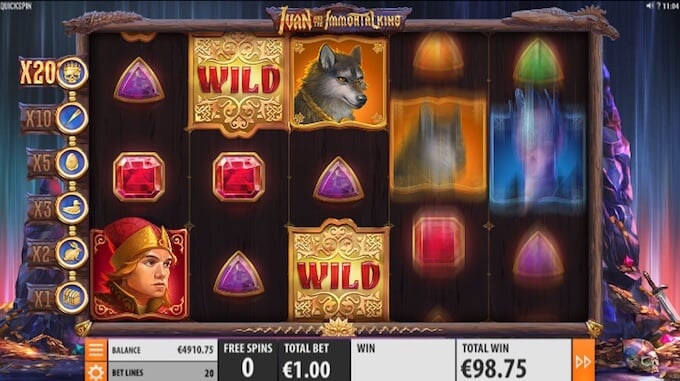 Although it takes a while to trigger the free spins in Ivan and the Immortal King, we found it quite easy to progress up the levels, as the Baba Yaga feature seems to activate quite often. I don’t know if we’ve just been incredibly lucky, but we did get all the way up to the x20 multiplier, which resulted in an epic win!

Where to play Ivan and the Immortal King slot

You can play Ivan the Immortal King slot by staking from 20p up to £100 on each spin. The game has a standard RTP of 96.29% and extremely high volatility – it will take time and patience to trigger the biggest payouts, but lucky players can expect to win up to 40,000x during the free spins, which makes Ivan and the Immortal King one of the highest paying slots we’ve come across lately!

Ivan and the Immortal King graphics and sound

Visually, this game looks quite typical of Quickspin, with high quality animations and a nice backdrop to the reels that successfully creates a fairytale-like atmosphere. The classical music suits the theme quite nicely and we found it makes for great ambient music, as it is relaxing while at the same time it conveys a sense of mystery, giving you the feeling that anything may happen! 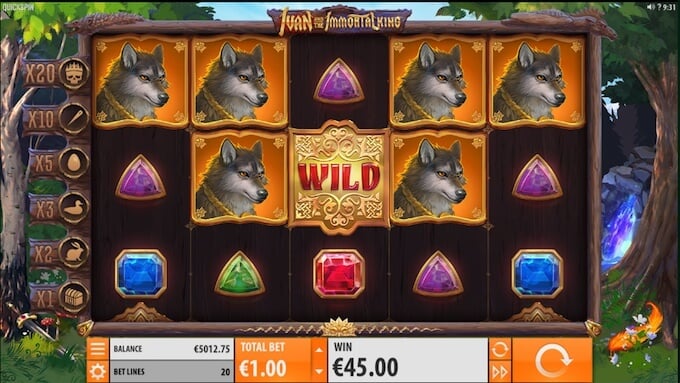 Ivan and the Immortal King slot – our Conclusion

This Quickspin release certainly comes with plenty of potential and can be a great choice for those players who don’t mind high volatility slots. The hit rate during the base game is quite good and ensures that you don’t lose too much as you attempt to trigger the free spins bonus. Admittedly, the bonus round is hard to trigger – it took us approximately 200 free spins before we managed – but it was worth it given the ease with which we moved up the levels! Try out Ivan and the Immortal King slot at Casumo to be one of the first to play this game, or browse for it at any other Quickspin powered casino as from the 11th of December 2018!