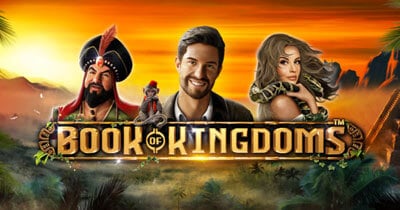 This Arabic-themed casino game has a release date for the 16th November 2020, with Reel Kingdom at the helm as the developer. Provided by Pragmatic Play, the Book of Kingdoms has an RTP of 96.69% and presents magical themes for a mystical journey among the ancient sands. There’s medium volatility, free spins, jackpots and a respin feature.

Play Book of Kingdoms at the best casinos in the UK!

Book of Kingdoms is now playable at the best online casinos in the UK. Below we have listed some operators you might want to check out, who offer hundreds of games and bonuses!

Book of Kingdoms Symbols And Payouts

You’ll begin your magical adventure with fifteen slots, creating a grid of five reels over three rows. With 25 paylines running from left to right, you’ll need to land at least three image matches for a winning combination. The maximum amount you’ll find for each symbol is five.

The Arabic theme shines through with images of a sultan and a monkey that reminds us of Aladdin’s small friend, Abu, while the princess wears the latest fashion in live snake decorations. Our hero returns from another Pragmatic Play slot, Return of the Dead.

There’s the titular book symbol that features as the wild, with a coin as the scatter. The low-value symbols consist of playing cards from Ten to Ace.

The adventurer pays the highest winnings with x20 for five matches. We’ve taken a screenshot of the paytable for our Book of Kingdoms slot review, down below.

The amount you bet will determine how large your winnings will be since the paytable multiplies the stake by the value per matching symbol. You can gamble between £0.20 and £250 in any UK online casino that hosts the Book of Kingdoms slot.

There’s medium volatility in the game. Therefore, chances are that you’ll win more frequently than low volatility slots but with higher values. You’ll also earn a decent profit with a Book of Kingdoms RTP of 96.69%.

The hit frequency for the bonus round is low, which means that you’ll seldom receive the big wins. You have a better potential for the base game symbols, with the card images giving you most of your regular wins. For the most part, they will be in small amounts.

There are three jackpot levels you can attain during the Money Respin feature. It consists of the Minor, Major and Mega jackpots. The highest win for the Mega is x1,000, but you can grab up to 20,000 during the free spins.

The base game has two features you can employ for more chances at winning. The first is the wild which replaces any other symbol except the coin. There’s also a respin mode with three jackpot levels and a bonus level of free spins.

You’ll encounter one standard wild and respins in the base game. We were disappointed that there weren’t any other extra modes, like a gamble feature. Despite this disappointment, let’s take a quick look at both of them.

The book replaces any other image in the game besides the coin. It can fall on either of the reels, helping you complete matching symbols on a winning pay line. You won’t find any other wilds in the Book of Kingdoms.

You’ll trigger the respin mode when three or more coins appear. Each coin remains in place with a value on it or a jackpot note. More coins will reset the respins to three again until none show up and the metre runs out. When the feature is done, you’ll receive all of your winnings.

You’ll notice how significant the book is when you discover that it acts as the wild and bonus symbols. When three or more appear, the bonus round begins with a random expanding symbol. The coin and book can’t expand, but you’ll receive five free spins at first. Receive another three bonus cards, and you’ll get five more spins.

The first aspect that draws the eyes is the step pyramid on the right in the background, followed by the desert and jungle on the left. It leaves a sense of the ancient Mayans and the mysteries of the tombs. The screen is kept clear with words and figures out of the way so that you can see the reels.

Arabic music has a calming effect, so ensure you don’t fall asleep while waiting for something to happen. When you win or enter the bonus round, the sound changes to express excitement in anticipation of a potential jackpot.

Other Slots To Play If You Like Book of Kingdoms Slot

We’re sure you’d like to try other games that are similar to Book of Kingdoms. Therefore, we’ve taken some time to recommend a few for you to try.

NetEnt has a medium-high volatility slot called Rise of Maya that also harks back to an ancient civilization. You’ll find four different wilds, each with its own abilities. There’s also a Scatter Nudge feature, which pushes scatters and wilds on the reels to trigger the free spins mode.

Moving over to Norse mythology, Asgard’s Gold is a game from PlayPearls which looks at Viking history. There are only a few bonus modes, with five reels and 20 paylines. What we enjoyed the most was the theme with the vibrant images and symbols.

Next up is Aztec Sun Hold and Win by Booongo. You’ll spot huge sun coins which assist you in unleashing a massive jackpot. It also triggers the respin feature, the hold-and-win jackpot gameplay taking the prime spotlight in this game.

The Arabic theme isn’t a new one and, just like so many of the slots that focus on old legends, it’s slightly overdone. However, Pragmatic Play’s enigmatic hero seems to be a mainstay in the provider’s titles, surrounding himself with danger and rewards. You can join the adventure with a potential win of x20,000!