This Halloween, NetEnt has come up with one of the creepiest slots ever: Halloween Jack is a 5-reel slot where wilds come with 3x multipliers and re-spins! 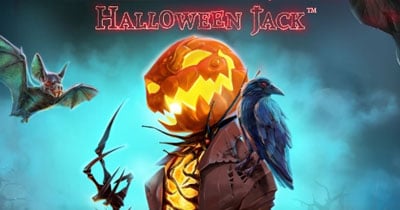 Just as we expected, software giant NetEnt couldn’t hold back from trying to make an impression this Halloween and will be releasing its new Halloween Jack slot towards the end of this month.

Halloween Jack is a beautifully-designed 5-reel slot that seems to be based on the older NetEnt classic Jack and the Beanstalk, with a special wild symbol that can lead to wins of up to 3000x the stake.

Let’s have a look at its features in more detail to see what else we can expect of this new slot ahead of its release on the 24th of October 2018.

Halloween Jack is a 5×3 slot with 20 fixed paylines featuring graphics that perfectly convey that creepy Halloween atmosphere that a lot of us seek at this time of year.

You’ll be spinning the reels to land on 10 to Ace playing card symbols, ravens, horseshoes, bats, horses, lanterns and a lady vampire, the latter being the most lucrative symbol that pays out 50 times the stake for a 5-symbol combination.

There’s also a wild symbol, in the guise of the carved Halloween pumpkin, which substitutes for all symbols except the treasure chest scatter and the lantern.

This wild symbol is one of the main highlights in Halloween Jack slot, and you’ll really look forward to it as you play.

It can land on all reels except for reel 1, and any win involving this wild will also get a 3x multiplier applied to it!

What’s more when a wild appears on the reels, this will also trigger the Walking Wild feature.

During this feature, a re-spin will be awarded and all wilds will move 1 reel to the left.

More re-spins will follow until there are no more wild symbols on the reels, so you can expect to accumulate a good amount by the end of this feature!

If you manage to land on at least 3 treasure chest scatters in Halloween Jack slot, you’ll get to the free spins round and get 10 free spins to start off with.

Just like in the base game, any winning combination that involves a wild during the free spins will come with a 3 multiplier, and the walking wild feature will also be triggered if the wild lands on any of the 3 middle reels.

What’s more, if you collect enough lantern symbols on the fifth reel during the free spins, you will trigger the Jack ‘o’ Lector feature, which will reward you with 3 exra wild features:

Stacked Jack o’ lantern Wild – if you collect 6 lantern symbols, you’ll get the stacked wild made up of 3 symbols and the walking wild feature.

Dare you give this spooky slot a spin this Halloween? If you’re not sure about staking real money yet, you could always claim a casino bonus by joining a new casino and use up your bonus money on Halloween Jack slot.

We also expect to come across a number of special promotions following its release as well as during Halloween, which will very likely involve free spins or tournaments on Halloween Jack.

Alternatively, join one of the below NetEnt casinos and claim their welcome offer to try Halloween Jack slot with a bonus.

You will soon be able to play Halloween Jack slot by staking anything from 20p up to £100 per spin on the device of your choice. The slot RTP is set at 96.28%, whereas volatility is rather high, with maximum wins of 3,000 the stake to be had if you’re lucky with the 3x multipliers!

One word of caution here: Halloween Jack is one of the creepiest slots we’ve come across and it’s not for the faint hearted!

When it comes to the design and soundtrack, NetEnt have done a great job of conveying the spookiest Halloween setting in the history of slots!

Of particular interest are the hands of the dead clutching at the lower paying symbols, to mention but one creepy example.

All the features in Halloween Jack are accompanied by haunting visual and sound effects which can be quite entertaining.

The soundtrack by itself is enough to send shivers down your spine.

What else can we say; if you love to get spooked, Halloween Jack is definitely a slot you should go for!

Although we haven’t yet had the chance to play Halloween Jack slot yet, from the sneak peek we’ve had and the information we’ve obtained so far we can already say that it will be worth playing.

It was a bit disappointing to find out that it uses exactly the same mechanism as Jack and the Beanstalk slot, but that doesn’t make its features any less rewarding.

Go ahead and give it a spin if you’re not too scared (we won’t blame you if you decide to switch off the soundtrack!).

While you wait for its release, you can also try out Yggdrasil’s Pumpkin Smash or Betsoft’s Blood Eternal to start getting in the mood for this Halloween!