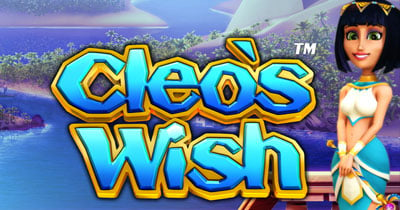 If you’re looking for a highly entertaining new slot which invites you to play along with one of the most famous women in history, then you’ll love playing Cleo’s Wish, a new slot by NextGen Gaming set in Egypt and featuring the character of Cleopatra as the main protagonist! From stacked and extra wilds to two bonus games and a highly rewarding super spins feature, it seems that Cleo’s Wish slot has a lot to offer to a fairly wide player base. Learn more about this game’s special features by reading our review below, and find out at which online casinos you can soon start playing this exciting slot.

Cleo’s Wish is a 5×3 slot with 25 paylines set in ancient Egypt and guarded by the attractive figure of Cleopatra, who works her magic to trigger a couple of special features. Symbols include the traditional A, K, Q, J, 10 and 9 card symbols, scarab beetles, bracelets, ankhs and a tile displaying the words ‘Cleo’s Wish’. There’s also a Cleopatra Wild symbol, which is the most rewarding symbol, leading to a 500 coin win for 5 in a line. This wild will also substitute all symbols except for the bonus pyramid scatter. 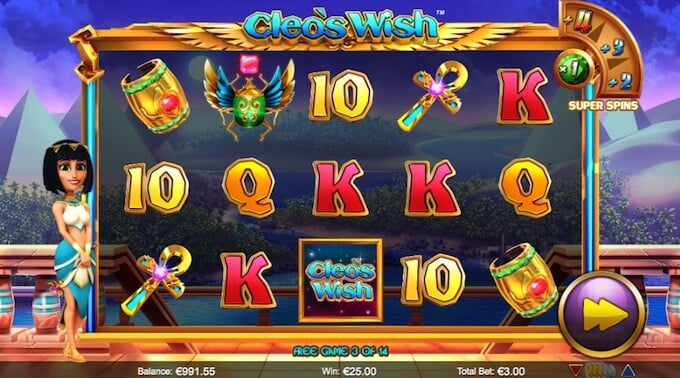 When it comes to special features in Cleo’s Wish, there’s indeed plenty to say about this slot! During the base game, up to a maximum of 5 reels may transform into Guaranteed Wild Reels, which as the name suggests, guarantee a Wild on that particular reel for the duration of that spin. Randomly during the base game, wilds may also be added anywhere on the reels as Cleopatra waves her magic wand. The slot’s Sands of Fortune feature, on the other hand, causes all logo, scarab, bracelet and ankh symbols to change into the same randomly chosen symbol, which gives players a better chance of landing a winning combination!

And now, let’s take a look at this slot’s thrilling free spins feature, for this is where the excitement shall truly pick up for a chance of winning massive amounts! Landing on 3 pyramid scatters on the reels will lead to either the Cleo’s Parade or the Eternal Riches game, depending on the card you choose. 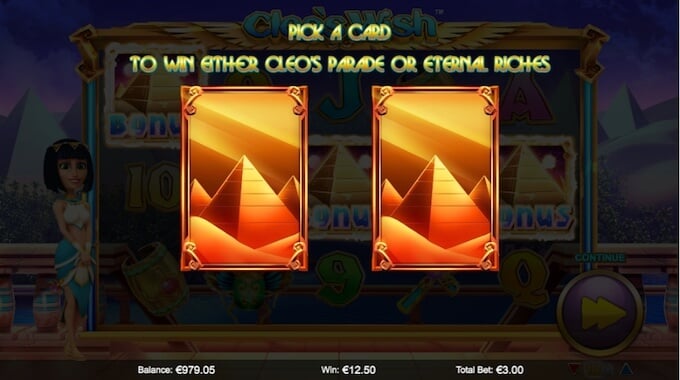 During the Cleo’s Parade free game feature, reel 5 will contain stacked wild symbols, which will move one reel to the left with each free spin. This round of free games can also lead to other stacked wilds appearing on the reels, which will remain in place and also start moving 1 reel to the left with each spin. Landing on 3 bonus symbols again will cause another stack of wilds to appear on the fifth reel, and these free games will come to an end when the last stack reaches the leftmost reel.

During the Eternal Riches game, players get 5 to 10 standard free spins, during which you’ll see a multiplier and spins meter on the top right of the reels. All wilds that land during this round will go towards the win multiplier, whereas any scatter adds up to 3 super spins on the spin meter. Once these free spins end, it’s time for the super spins, the number of which depends on the amount of super spins you’ve collected on the spin meter during the Eternal Riches game. All wins you collect during these super spins will be multiplied by the win multiplier, which will really allow you to accumulate big amounts by the end of it!

If what you’ve learnt so far about Cleo’s Wish has caught your attention, then it’s time for you to claim a good casino bonus to help you get further on your hunt for Cleopatra’s riches. If you sign up as a new player and make a first deposit with one of the casinos we recommend on our list, you can be sure that you’ll be rewarded with a decent deposit match and/or free spins bonus, which you can then use to play slots like Cleo’s Wish.

Where to play Cleos Wish slot

Players can start playing Cleo’s Wish by staking from 30p to £60 per spin. The slot has a decent RTP of 95.152% and is of medium to high volatility. The game pays out low but frequent wins during the base game, and you can expect to secure the highest payouts during the super spins round, where players may win up to 200,000 coins!

Cleos Wish is a highly engaging slot with bright cartoonish graphics and the character of Cleopatra who seems to interact with the players as they start spinning. The piano soundtrack livens up the game, and sounds quite like something you’d hear at a chic wedding (we’d assume that whether you’ll like this music or not will depend greatly on your taste!). The rhythm picks up during the bonus games and super spins, and gets very entertaining as it sets the right mood for a big win! The presentation and sound of this game actually remind us of live games they play on television, where Cleopatra acts very much like a presenter!

We recommend trying your luck on Cleo’s Wish due to the variety and excitement that this slot offers. An oasis of riches awaits you as you start unlocking this slot’s special features, and there will hardly be a dull moment given the lively music and the friendly character of Cleopatra. Of course, being a slot of rather high volatility makes large payouts less frequent, but we think it’s worth spinning those reels a number of times to try to get to the game’s super spins feature, as you can expect large rewards during this round! Have a go at Cleo’s Wish this February 2018, and sign up with a new casino in order to get a good welcome bonus to get the ball rolling. CasinoHawks wishes you the best of luck! 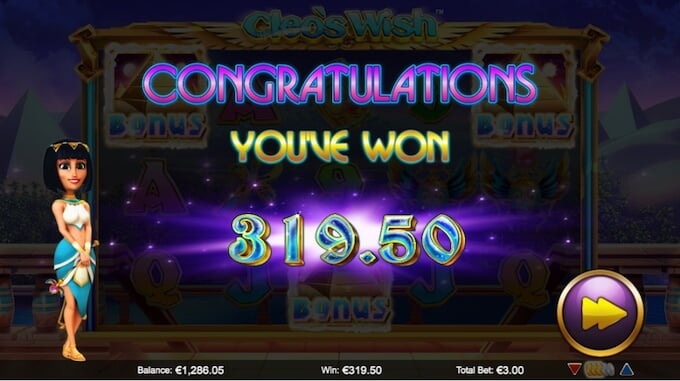